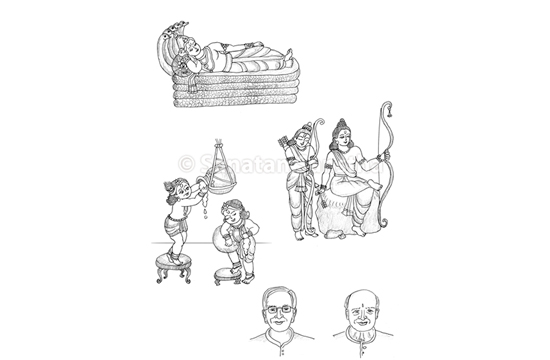 1 A. Circumstances that led to drawing the picture

After reading about 50 pages, I could experience the dasyabhakti (Devotion unto God as a servitor) of Pujya Appakaka. He is not an ordinary brother, but a brilliant example of an ideal personality and divinity. I remembered a shloka from ‘Yadhwachalmahatmya’ (A Holy book of Hinduism) as given ahead, and H.H. Dr Athavale(Sanatan’s source of inspiration) got the following picture drawn through me.

Meaning : Anant is the first Incarnation and Lakshman is the second. Balaram is the third and there will be one more Incarnation in Kaliyug .

I understood the meaning of this shloka as – ‘In Satyayug , Shesha came with Bhagawan Narayan. In Tretayug, He became Lakshman with Shriram. In Dwaparyug, He became Balaram with Shrikrushna; and now He has become an ideal disciple of H.H. Dr Athavale in the form of Pujya Appakaka.’ Who can have the ability to write the biography of H.H. Dr Athavale ? It can be none other than Adishesh, who became Maharshi Patanjali and narrated the Yogasutras to thousands of disciples at the same time. After completing the picture, I read the comments of Saint Ramayanacharya Pujya Tulsiram Maharaj Pokharkar from Kolhapur (Maharashtra) on H.H. Dr Athavale. He is a Dharmayoddha (Warrior who fights for Dharma) who descended on the earth to fight the Holy war.’

I realised that He is the donor of knowledge, it is very much He who gives me the spiritual experience and transforms the experience into a picture. O God ! You are always giving me something. I am fully drenched in and hypnotised by the shower of Your grace. I do not have anything to offer You that I can call mine. O God ! Let me be able to surrender myself completely at Your Holy feet.’

1 B. A thought that Pujya Appakaka
is Deity Shesha and getting an answer to this instantly

‘While reading an article written by Pujya Appakaka in ‘Dainik Sanatan Prabhat’ of 28.7.2013, I thought Appakaka was Deity Shesha. At that time, God provided the answer through the following thought.

1. In Tretayug, Shriram was Shrihari and Lakshman was Deity Shesha, the serpent.

2. In Dwaparyug, Shrikrushna was Shrihari and Balaram was Deity Shesha, the serpent.

The task of Balaram must have remained incomplete; hence, it is being completed through this writing.’