1. Three steps of God encompassing the mind, intellect and ego 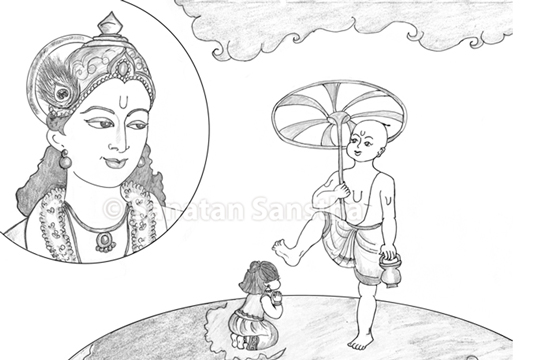 ‘I read a prayer received from Mr Ramesh Shinde through SMS on 26.9.2012 on the occasion of Vaman Jayanti – ‘O God ! Just as You have encompassed Heaven, Earth and Hell, please encompass my mind, intellect and ego too’. From this prayer, I was inspired to draw this picture.

1 A. Earth region represents the mind and
when God encompasses the mind, we get Divine Anand

1 B. When God encompasses the intellect,
it becomes all-encompassing and imparts us the knowledge of the entire universe

Our head represents our intellect. There are limitations to our intellect. When God (Vaman had placed the third step on King Bali’s head) encompasses our intellect, it becomes all-encompassing and imparts us the knowledge of the entire universe.

1 C. The Heaven region represents ego, and
when God encompasses ego, it gets transformed into Sohambhav

The Heaven region represents our ego. Ego is subtler than the mind and intellect. When God encompasses ego, it gets transformed into Sohambhav (Spiritual emotion that ‘I am That [God]’).

1. The three steps impart us knowledge, devotion and detachment.

3. Transcending the past, future and present, makes us eternal (Immortal), meaning, kalatit (Timeless).

4. Transcending the three subtle naḍis (Energy channels) in our body called Iḍa, Pingala and Sushumna, provides us with nectar in the form of internal Shanti (Peace) at the Sahasrarchakra (Notional opening situated at the crown of the head, which leads to realization of Brahman and Shiv).

5. Transcending the triad of ‘the doer, one who gets it done and karma’, makes every karma (Action) of ours an akarma-karma (An action which does not give rise to destiny).’

1 E. Special features of the picture

‘Even after conquering the three worlds with three steps, God still had enough to encompass the universe.’ (Divine Knowledge received through the medium of Ms Madhura Bhosale, 18.7.2013, 10.50 p.m.)

2. Churning of the ocean commenced by seekers in Kaliyug due to God’s grace 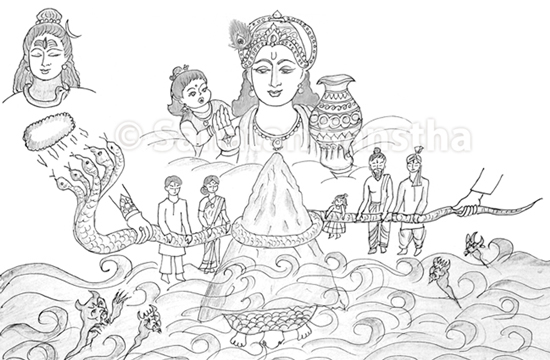 2 A. Circumstances that led to drawing the picture

2 A 1. While reading the Holy text ‘Establishment of the Divine Kingdom’ as told by Pujya Rajendra Shinde (Sanatan’s 6th saint), Shrikrushṇa gave knowledge about the churning of ocean

‘A few days before I left for USA, Pujya Rajendra Shinde asked me to read the text ‘Establishment of the Divine Kingdom’.

While reading this Holy text, Shrikrushṇa gave me knowledge about the churning of the ocean and only by Shrikrushṇa’s grace I was inspired to write this.

2 A 2. Churning of the ocean by Deities and demons for obtaining nectar

The Deities and demons had churned the ocean to obtain nectar. To do this, they used the serpent Vasuki as a rope and wrapped it around the Mandar Mountain. The Deities held the tail and the demons the mouth of the serpent and churned the ocean. Bhagawan Shrivishṇu incarnated as a tortoise and held the mountain on His back. Thus, the ocean was churned, nectar was obtained and a few drops of it fell on the earth.

2 A 3. Change in the form of churning of the ocean in Kaliyug

In today’s times, that is, in the Kaliyug within the Kaliyug, such a churning is continuing; but as per the times, the form of some of its components has changed. The changed form is given ahead.

3 A. Various components of churning and their implied meaning

3 A 1. Seekers churning the ocean in the form of ‘Sanatan Hindu Dharma’

Today, holding the rope in the form of vyashti and samashti sadhana (note 1), Sanatan’s seekers are churning the ocean in the form of ‘Sanatan Hindu Dharma’ by the grace of Shrikrushṇa and resolve of the Saints. This rope is wrapped around the Mandar Mountain (signifying bhav), and the Incarnation in the form of tortoise has placed the Mountain firmly on its back. If we have bhav unto God, then alone He will ferry us across the ocean of materialistic world. Shrikrushṇa held the Govardhan Mountain on His small finger and the gops and gopis supported it with their sticks. Similarly, seekers have participated in Shrikrushṇa’s mission on the strength of their yearning and as a part of their sadhana (spiritual practice), and God (Shrikrushṇa) is Himself churning the ocean through the medium of seekers.

When we have earnestness, the grace of Bhagawan Shrikrushṇa and resolve of Saints get activated. When this happens, they themselves get sadhana performed through us. In this process akin to churning of the ocean, all personality defects and ego manifest in the form of ‘poison’, meaning, they intensify. Bhagawan Shiva, who is the symbol of Dissolution, destroys the personality defects and ego of the seekers.

2 A 4. Though the demons are creating obstacles in this process of churning of the ocean, God Himself has taken the responsibility of the churning and hence, we will obtain the nectar in the form of the ‘Hindu Nation’

Deities as well as demons participated in the process of churning of the ocean of the earlier times. In today’s terrible Kaliyug, the demons are present in the form of those who indulge in ‘Love Jihad’, religious conversions, cow-slaughter, takeover of temples and corrupt politicians, and are creating obstacles in the churning process of the seekers. Yet, because the seekers have God’s grace, no one can stop this churning; for, God who created the entire universe merely by a resolve in a moment, this is not at all impossible. Hence, He himself has taken up the responsibility of this churning. As fruit of the efforts of the seekers and devout Hindus for this churning, Shrikrushṇa is going to gift nectar in the form of the ‘Hindu Nation’.

2 B. Special features of the picture