4. Shrikrushna highlighted the difference between Bhogabhumi and Yogabhumi by showing to the lady-seeker the prosperous region of Heaven 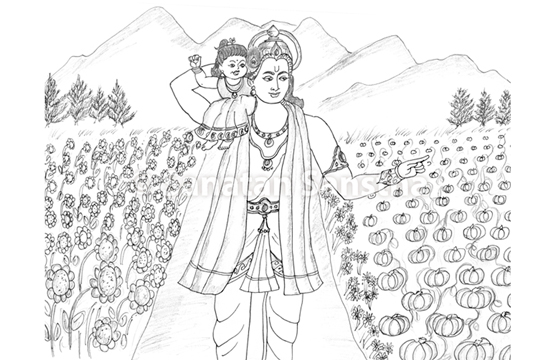 4 A. Inability to draw a single picture exhibiting balakbhav due to
covering of distressing energy and feeling of loneliness in the new place,
and after earnest request of lady-seeker to Shrikrushna, He brings to her notice
that though He is with her every moment, she is not aware of His existence

‘For almost a week since arriving in USA at my daughter’s house, I had not performed spiritual remedies (Note). As a result, a covering of distressing energy developed around me. Hence, I could not draw a single picture exhibiting balakbhav. Since I was alone in a new place, I requested Shrikrushna earnestly. He made me realise that though He was with me every moment, I was not aware of His existence.

4 B. Explanation of the picture

1. Realisation of generosity and the attitude of unrestrained gifting

In the picture, I sat on Shrikrushna’s shoulder and was moving around when on one side I saw a rich crop of pumpkins & on the other side, a rich farm of sunflowers. From this, I realized the generosity of mother earth and attitude of unrestrained gifting.

2. Pumpkins are given weird shapes and used in Halloween festival, which attracts negative energies

The Halloween festival that is celebrated in western countries attracts negative energies; pumpkins are given weird shapes and then used. (The westerners celebrate ‘Halloween’ or ‘All Hallows Eve’ on 31st October. During this festival, houses are decorated with lanterns made by carving pumpkins into scary faces. People wear weird and frightening clothing. On this day, they indulge in activities such as frightening others, narrating horror stories, watching horror movies or visiting places possessed by ghosts. – Compiler)

In this picture, Shrikrushna showed me the Bhogabhumi (Land where one completes all the sufferings as per the destiny) of westerners where there is prosperity everywhere. In other words, He showed me the Heaven which is prosperous with many means of happiness. He, thus, told me the difference between Heaven which leads an individual to the path of Pravrutti (Tendency towards worldly pleasures) and the Holy land of Hindus which leads an individual to the path of Nivrutti, meaning, the Yogabhumi (Land where one performs spiritual practice).

B. The squirrels in western countries are bigger in size than those seen in Bharat; however, the three strips of golden colour on the back of Bharatiya squirrels (caused by Shriram’s loving touch) are not seen on the backs of western squirrels.’

4 C. Special features of the picture

‘An ordinary seeker who has a little accumulated merit but who honestly strives hard for God-realisation is dearer to God than one who has lots of accumulated merit but is engrossed in enjoying materialistic pleasures. Instead of remaining engrossed in heavenly pleasures available as per his destiny, if an individual utilises his kriyaman karma (Wilful action) for working hard towards God-realisation, devotion will blossom in his heart. The picture teaches that God likes dasya-bhakti (Devotion of a servitor) performed with sevabhav (Spiritual emotion of service unto the Absolute Truth) more than the sadhana (spiritual practice) performed on the strength of merits.’ (Divine Knowledge received through the medium of Ms Madhura Bhosale, 18.7.2013, 10.50 p.m.)

5. Difference between ‘Navaratri’ celebrations in Bharat
and Halloween celebrated in western countries 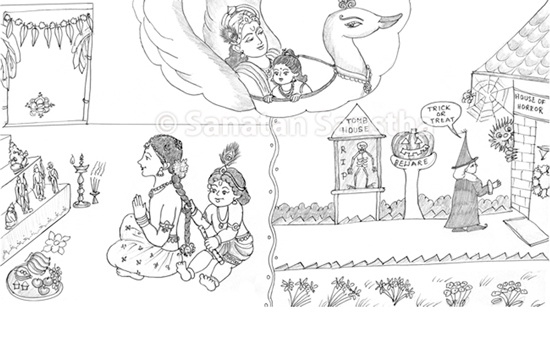 ‘In the month of October, Navaratri festival is celebrated in Bharat and Halloween in USA. I observed some weird aspects in respect of Halloween everywhere in USA. I felt Bhagawan Shrikrushna wanted to teach me something by telling me to study various aspects and also telling me how to remain in a constant learning mode. Through the two festivals celebrated in two different continents, Bhagawan Shrikrushna taught me the following aspects.

Note : The remedies performed for removal of distress caused by negative energies are called ‘Spiritual remedies’. To ward off such distress, Sanatan Sanstha recommends some remedies such as praying, chanting God’s Name. Due to such remedies, distressing energy in the individual’s body comes out through belches, yawns etc. (Back)