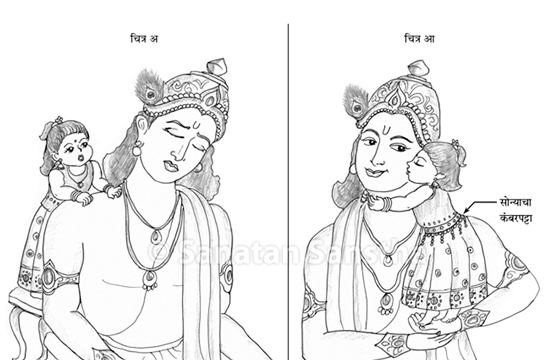 A. Implied meaning of the picture

Picture A. When Shrikrushna complained of pain in His neck and shoulders, the girl-child massaged these parts

Every day Bhagawan Shrikrushna takes good care of me. He feeds me, puts me to sleep, and turning His neck towards me, He narrates stories as well. One day, Shrikrushna pretended that His neck and shoulders were paining. Since the omnipotent and unconquerable God is everything to me, I could not watch Him suffer in pain. Hence, with my tiny hands I began to massage His neck and shoulders. It was as if He was waiting for this, and before I could complete massaging, He told me that by the very touch of my hands His pain vanished all of a sudden. Seeing Him laugh, I felt very happy.

Picture B. Saying that the pain had vanished, Shrikrushna gifted a golden waist-band to the girl-child

For this tiny seva I performed, He gifted a shining waist-band to me. In return, I embraced Him with extreme Anand and kissed Him on the cheek. I have worn this new gift in my picture. Since I am always in a state of balakbhav (childlike emotion), of all the types of bhav, I am attracted to Yashoda’s vatsalyabhav (spiritual emotion of maternal love) to a greater extent. Since I am the child of Shrikrushna, I experience the shower of maternal love from God. Children are prone to emulate their dear parents. I feel that I should also become Yashoda and take care of Balkrushna. This picture depicts how I took care of Balkrushna throughout the day chronologically.

Picture No. 1. In the morning I wake up Balkrushna and bathe Him.

Picture No. 2. Then I swab His body with a soft towel.

Picture No. 3. Being in a state of matrubhav (Spiritual emotion of a mother), I am worried about Him catching cold after the bath; hence, soon after the bath, I wave smoke of frankincense (generated by putting frankincense granules over smouldering coal) around His body.

Picture No. 4. Then I help Him wear a small dhoti and place a small garland of basil leaves around His neck, which is prepared only for Him.

Picture No. 5. Now I am applying a tilak (A vertical mark made on the forehead with substances such as kumkum) of gopichandan (Soil from Dwarka) on His forehead.

Picture No. 6. My Balkrushna is hungry and hence, I am feeding him curd-rice, which is as soft as butter.

Picture No. 7. Since He is in a mood to play, we are playing hide-and-seek.

Picture No. 8. Other gopis complain to me that my Balkrushna stole butter from their houses. Pretending to be angry, I ask Him, ‘Have You really stolen their butter?’

Picture No. 9. I am casting off the evil-eye for Him in the evening with a coconut. He is God and has control over good as well as the bad; yet, according to the adage ‘Ignorance is Bliss’, I cast off the evil-eye.

Picture No. 10. After spending the day in merriment in this way, my Balkrushna is now sleepy. I make Him lie on my lap and sing a lullaby.

Bhagawan Shrikrushna is looking with admiration and love at my actions that exhibit vatsalyabhav. This is the extraordinary leela (Divine play) of Shriguru. It is entirely due to His grace, that I can remain in balakbhav and get this unique spiritual experience of vatsalyabhav.’

With the development of vatsalyabhakti in the jivatma (Embodied soul undertaking spiritual practice) that is in a state of balakbhav, vatsalyabhav is displayed from the acts of the child. If we compare balyavastha (Child-like state) to a dished plate used for performing the Arati (A ritual of waving a lit lamp in front of a Deity and Saints, accompanied by singing of hymns), then the pictures displaying balakbhav is the worship of God performed by becoming a niranjan (A five-petalled metal lamp-dish with an attached conical stand to be set before an Idol), or pancharati (Arati with five flames) or camphor. It is akin to making a garland with flowers of nine different types of devotions that are adorned with vatsalyabhav and offering it to Shrikrushna. – (Knowledge through medium of Ms Madhura Bhosale, 18.7.2013)

3. Getting the feeling of being a mother while massaging the legs of Shrikrushna 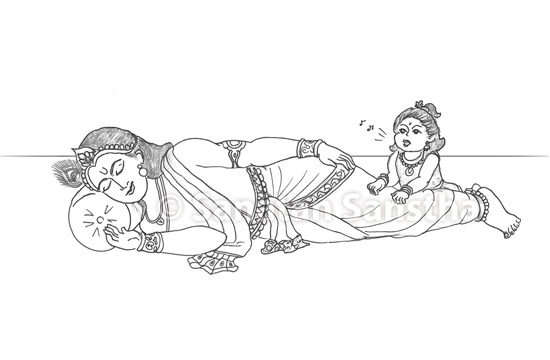 Till completion of the picture on page Shrikrushna kept standing; hence, He is now resting on the bed. Since Shri Mahalakshmi is merged with Shrivishnu, there is no one to massage Shrikrushna’s legs; therefore, I am massaging His legs and singing the lullaby too. (At this time I felt as if I am an aged mother.) – Mrs Uma Ravichandran, Chennai, Tamil Nadu. 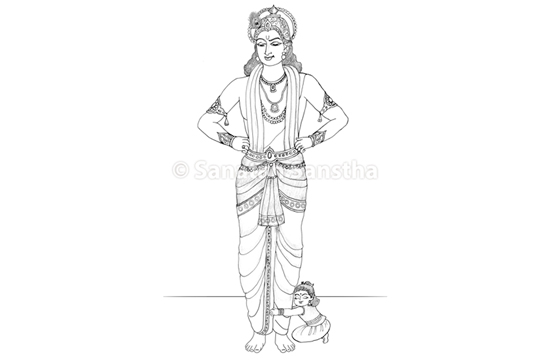 A. Explanation of the picture –
In obeying Shriguru, the ladyseeker holds Shrikrushna’s Holy feet tightly

Today, I read the guiding words of Shriguru that, ‘Till the spiritual level of 70% is attained, we should hold God’s hand and never leave it. After attaining spiritual level of 70%, it is God Himself who holds our hand eternally’. My God’s hands reach His knees and I am too small in front of Him. Hence, I cannot hold His hands properly. My hands reach only His Holy feet and hence, I have held the Holy feet tightly. I have resolved not to leave them ever. Seeing this state, there is an amusing expression of ‘How to deal with this girl?’ on Shrikrushna’s face.’ – Mrs Uma Ravichandran, Chennai, Tamil Nadu. (15.10.2012)

This picture depicts the state of surrender which is attained with the subtle dissolution of doership after the dissolution of the subtle ego from the Anand in the state of a child. Shrikrushna, who is standing with His hands on the waist like Deity Vitthal, seems to have adopted the state of sakshibhav (Spiritual emotion of being in an observer state) by deactivating the motor organs physically and without performing any karma (Action which gives rise to destiny). The girl-devotee, whose subtle ego has dissolved, is aware that though Shrikrushna does not seem to be doing anything physically, He exists in everyone and He alone is performing all the karmas in the subtle.

Through the postures of the girl-devotee, this picture shows the devotee who is performing devotion with complete surrender in an ego less state, and praying with a bhav of surrender for liberation from the cycles of birth and death, “O God ! You only get the akarma-karma (An act, action which despite being a karma bestows the benefits of akarma) performed through me, free me from all the bondages of karma and give me a place at your Holy feet eternally”.

seva
Service unto the Absolute Truth, that is, God Principle
Karma
An act that becomes destiny, meaning, leads to a give and take account that has to be settled
dhoti
A rectangular piece of unstitched cloth, usually around 4-5 metres long, wrapped around the waist and the legs and knotted at the waist by Hindus
Akarma-karma
Non-act; act in which doership is dispelled
Anand
Bliss