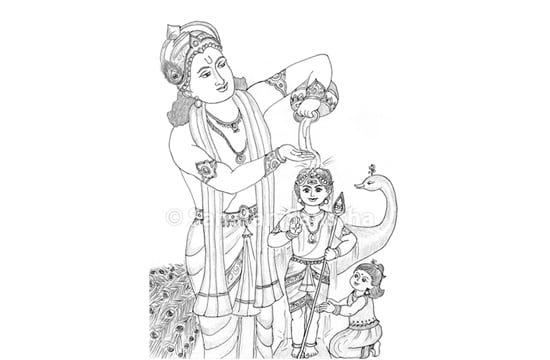 On 24.9.2012, Mrs Ragini Premnath, a lady-seeker from Chennai (Mother of the child-seeker Ms Ranjani who draws pictures of Shrikrushna) narrated her spiritual experience to me and I got the inspiration to draw the following picture.

1. Lady-seeker getting depressed since she was a devotee of Deity Muruga, and despite efforts, she could not awaken bhav (Spiritual emotion) unto Shrikrushna

Mrs Ragini is a great devotee of Deity Muruga (Kartikswami). Therefore, despite intense efforts, she could not awaken bhav unto Shrikrushna and hence, was depressed.

2. Lady-seeker intensely prayed to Shrikrushna and because a devotional song of Deity Muruga was being played at that time, tears of bhav rolled down her cheeks, and with the thought that Shrikrushna had replied in this manner, she became calm

On 19.9.2012, I had gone to Ganesh Temple for seva. On that day, Mrs Ragini confessed to Shrikrushna about thoughts that disturbed her and prayed intensely for His guidance. She also asked Him to turn her devotion from Muruga to Shrikrushna. A devotional song of Shri Ganesh was being played loudly outside the temple at that time. As soon as Mrs Ragini came out of the temple, the song stopped and her favourite Tamil song of Deity Muruga began on the loud speaker. Her bhav awakened instantly and tears of bhav rolled down her cheeks. She perceived that it was Shrikrushna who had answered her promptly because of higher proportion of Shrikrushna Principle in the atmosphere. Her mind became peaceful and she realised that ‘bhav’ was important. In this picture, Shrikrushna is consecrating Deity Muruga with milk. Peacock, Deity Muruga’s vehicle, is looking at the scene with love. Similarly, Ragini is holding Deity Muruga’s feet tightly.

In this picture depicting balak-bhav, Ragini looks like Uma. When asked about the reason, Mrs Uma said, “Mrs Ragini Premnath, lady-seeker from Chennai, has balakbhav towards Deity Muruga. The faces of all seekers who have balakbhav look alike. Hence, in this picture, the face of Mrs Ragini has also been drawn like that of Uma.” – Ms Priyanka Lotlikar

2. Shrikrushna consecrates the worshipped Deity of the lady-seeker in balakbhav

Shrikrushna has consecrated the worshipped Deity of the lady-seeker in balakbhav with milk on realising her bhav of worshipping the Deity and bhav of surrender that since she does not know how to love the worshipped Deity and is too small to worship. The picture depicts a fine blend of the lady-seeker’s closeness with Shrikrushna and her yearning to worship through this bhav.’ – (Through the medium of Ms Madhura Bhosale, 18.7.2013)

2. Prayer in the form of a picture unto the Holy feet of God 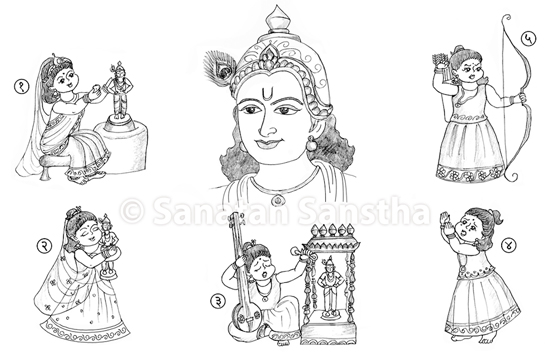 Explanation of the picture

1. While translating the prayer made by Pujya Satyavan Kadam, the implied meaning of the prayer stirred my subconscious mind and it awakened my bhav, which resulted in my drawing a picture depicting balakbhav

Once I heard a prayer made unto Shrikrushna by Sanatan’s Saint, Pujya Satyavan Kadam. Through the prayer, He pleaded to Shrikrushna thus – ‘O Shrikrushna ! Teach me how to inculcate the bhav of motherly love of Yashoda (Picture 1), the Priti (Unconditional love, spiritual love devoid of expectations) of Radha (Picture 2), the bhav of offering oneself unto Shrikrushna of Mira (Picture 3), the bhav of a supplicant of Draupadi (Picture 4) and also guide me in the Holy war as You guided the archer Arjun (Picture 5)’. While translating the prayer into Tamil, its implied meaning stirred my subconscious mind and it awakened a lot of bhav in me. This picture depicting balakbhav is actually a prayer in the form of a picture unto the Holy feet of God.’ – Mrs Uma Ravichandran, Chennai. (11.2.2013) 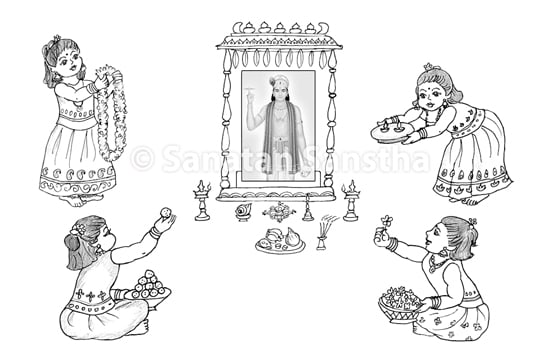 I am too young to worship with sixteen specific substances. Yet, I wished to worship God; hence, I did it in mind. I recollected the stories of some devotees and tried to worship accordingly.

While offering flowers to Shrikrushna, I had bhav akin to that of Shiva-devotee Kannappa Nayanar. Kannappa Nayanar from the Bhil caste was an ardent devotee of Deity Shiva; but he did not know how to worship. Since he carried meat in his hands to be offered as Naivedya, he would put flowers plucked for puja (Ritualistic worship) on his head, and after reaching the temple, he would offer them to Deity Shiva.

2. Bhav like that of Shrikrushna-devotee Andal while offering a garland of tulsi (Holy basil) leaves to Shrikrushna

I had bhav akin to that of Shrikrushna-devotee Andal while offering a garland of tulsi leaves to Shrikrushna. This lady-devotee, who had become mad for Shrikrushna, would wear the garland of tulsi leaves herself before offering it to Ranganath (Shrikrushna) and look in the mirror just to see how Ranganath would look like wearing the garland. When her father came to know of this, he told her that it was inappropriate; the next day, she offered the garland to the Idol of Ranganath without wearing it herself. At night, her father had a dream in which Ranganath told him that He wanted the same garland which had been worn by Andal. Her father realised that Andal was not an ordinary girl, but an ardent devotee of Ranganath.

While offering Naivedya to Shrikrushna, my bhav was like that of Shriram-devotee Shabari (She would first taste each berry and only then offer them to Shriram).

While offering Arati, my bhav was like that of Kousalya (Shriram’s mother).

Tulsi
Holy basil plant
seva
Service unto the Absolute Truth, that is, God Principle
Naivedya
Food offered to the Deity as a part of ritualistic worship