5. The worship of Shri Krushna

Spiritual practice is the medium through which one progresses from the individual state (Jiva) to the universal state (Supreme soul or Shiva). Understanding the science underlying the Deity enhances the faith of devotees in the Deity, and substantially improves their quality of spiritual practice. The following article discusses Shri Krushna’s main attributes, His forms and some powerful chants that are utilised by devotees all over the world to praise Shri Krushna.

Meaning : One who attracts is Krushna.

Vasaha means life, sustenance or stability. It also refers to the ability to establish and sustain. Of the three tasks of God (Creation, Sustenance and Dissolution), Vasudev is the Deity associated with Sustenance.

Vasudev is the Deity that provides the vibrations necessary for sustaining the entire animate creation in a specific state of existence. (Atharvaveda)

Shri Krushna is often referred to as the complete Incarnation. He was also an Ideal in all respects. Following are the highest ideals He established and functions He performed during His life in this world.

Shri Krushna would behave in a manner so as to make His parents, Vasudev and Devaki, as well as His foster parents, Nanda and Yashoda happy.

Shri Krushna kept all His wives happy ! Even Narad’s efforts were frustrated when he tried to create strife amongst them.

When Shri Krushna saw that His children could not be converted to the ways of Righteousness (Dharma), He punished them by bringing about their destruction.

Even after becoming the ruler of Dwarka, Shri Krushna lovingly welcomed His poor childhood friend, Sudama. It was because of His friendship with the Pandavas, that He helped them in the most difficult of circumstances.

One who punished those who perpetrated injustice

Shri Krushna Himself fought or helped others fight to overcome the injustice perpetrated by Kansa, Jarasandh, Kouravs and others.

Realising that the 16,000 young maidens freed from Narakasur’s captivity by Him would not get a place in the society and may face calamities, Shri Krushna married them.

Placing welfare of others first

Some people criticise Shri Krushna’s behaviour, but He did everything for the welfare of others. He even broke rules for the sake of others, for example killing Jarasandh, abducting Subhadra so that Arjun could marry her, marrying 16,000 maidens, etc.

Guiding for the benefit of the society

Shri Krushna’s main objective was the protection of the society; He had realised that to achieve this, it was necessary to completely destroy those creating obstacles and committing misdeeds. He was sure that in the immoral world, wicked people would gain power and the society would face ruin. Therefore, He gave the following advice – ‘Many a time, speaking a white lie is superior to speaking the Truth’, ‘When evil prevails over the virtuous, it is necessary to overlook Righteousness (Dharma) and fight’.

During the Rajasuya-yadnya (The royal sacrifice, performed only by a paramount ruler) of the Pandavs, Shri Krushna washed the feet of the Brahmans (Priests) and He also picked up the used leaves on which food had been eaten.

The philosophy propounded by Shri Krushna is explained in Shrimadbhagwadgita. Through it, He has demonstrated the relationship between pravrutti (Getting involved with the world) and nivrutti (Getting detached from the world). For Him, all ways to God-realisation were acceptable. He advocated harmonising all these paths and established His new philosophy on duty, that is, action devoid of the expectation of its fruit. In Shrimadbhagwadgita, Shri Krushna has beautifully explained to Arjun how one should perform his worldly duty with detachment for liberation from the cycles of birth and death.

Shri Krushna destroyed Arjun’s doubts by explaining the Gita to him in words and giving him experiences through a medium beyond words. During the battle of Kurukshetra, Shri Krushna was in Dnyanmudra (An inner state of imparting Knowledge).

We come across the following types of Idols of Shri Krushna corresponding to the different aspects of His life. No other Deity or Incarnation has such variation in their Idols.

Shri Krushna in the child form

Yashoda (His mother) carrying Him.

The crawling Shri Krushna. Most people have this Idol in the temple-room of their house.

Standing with His right leg crossed towards the left of the left leg, Shri Krushna plays the flute and Radha stands alongside Him.

Here, Shri Krushna is seen with four arms, with Rukmini on one side and Satyabhama on the other. These idols are popular in South India.

Murlidhar (One who holds the flute) and with eight arms.

The worship of Shri Krushna 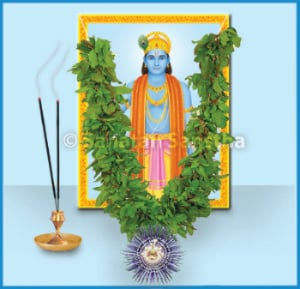 Since the Kalisantaran Upanishad is from Krushna-yajurveda, it is also known as Harinamopanishad. In brief, it suggests that all sins in Kali (referring to Kaliyug, the fourth era of strife) are burnt by merely chanting the Name of Narayan. This Name comprises the following sixteen words :

Some people belonging to the Shri Krushna sect chant the second line of the mantra first, then the first line.

Meaning : We know Shri Krushna, Devaki’s son. We meditate upon Vasudev (Shri Krushna). May Shri Krushna inspire our intellect with the Truth.

Meaning : We know Damodar. We meditate upon Vasudev (Vasudev’s son, Shri Krushna). May Shri Krushna inspire our intellect with the Truth.

Yantra
Device/shape that represents a Deity. (However, a subtle Yantra is a distressing form created by negative energies in the subtle.)
Yadnya
Sacrificial fire
Kaliyug
Era of strife (The present era, amongst the four eras)
Jiva
Embodied soul
Dharma
Righteousness
mantra
A syllable or words representing spiritual reality or an aspect of God uttered to protect oneself or to achieve a specific goal