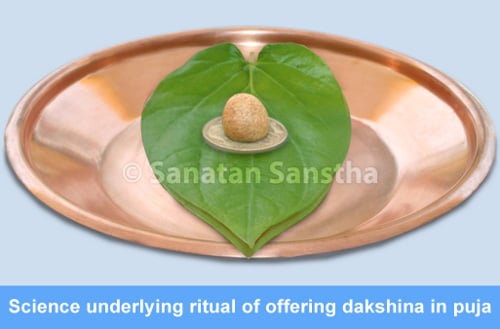 1. What is the Science in the ritual of
offering dakshina in puja (Ritualistic worship)?

By offering dakshina, a virtue of sacrifice develop sin the individual. From sacrifice, detachment develops and this in turn gives rise to vairagya (Ascetic-like detachment). Once vairagya develops, the individual remains in constant communion with God,even though in the Maya (The Great Illusion). The foundation of Hinduism is in sacrifice.That is why learning to sacrifice (by offering money), is the first step in Karmakanda . Hence, the ritual of dakshina has inordinate importance.Dakshina (Wealth) is looked upon as Divine energy,meaning Devi Lakshmi, and worshipped. Hence, every act performed is complemented with Divine energy and it becomes an act of akarma-karma (An act, action which despite being a karma bestows the benefits of akarma). Consequently, its fruit does not create a give and take account; but it is added in the merits.

2. Why is the money in the ritual
of offering dakshina, placed on two
betel leaves along with betel nut or coconut?

The money in the ritual of offering dakshina is never given by itself.It is important to place it along with betel nut or coconut on the betel leaves. In this process, the dakshina functions in the form of Divine energy, whereas the betel nut or coconut functions in the form of Deity Shiva. In a way Shiva-Shakti are offered a place for their mission,that is, in a way a seat is offered to Them. The betel leaves are always placed in pairs, because two signifies dvait (Duality) in the mission of Shiva-Shakti. In this way, the worshipper offers a seat to Shiva-Shakti in the form of betel nut or coconut and dakshina on the betel leaves and prays that they function in sagun (Manifest) form. (Through the medium of Mrs. Anjali Gadgil, 21st April 2005, 8.38 p.m.)

Reference : Sanatan’s Holy Text ‘What is the Importance of the Substances used in Ritualistic Worship ?’

Karmakanda
Spiritual practice of rites, rituals and observances performed at the physical level
Karma
An act that becomes destiny, meaning, leads to a give and take account that has to be settled
Dakshina
Offering made to a Brahman / a Guru after a ritual, as thanksgiving for imparting knowledge
Akarma-karma
Non-act; act in which doership is dispelled