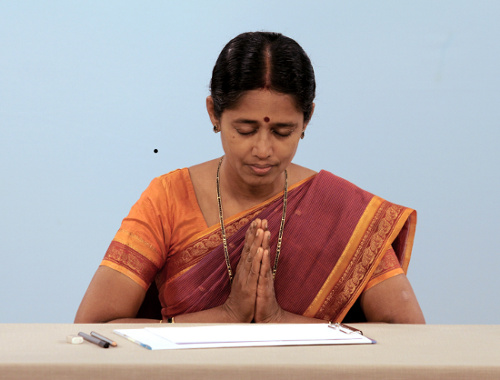 Through this article we will understand the knowledge obtained by Mrs. Uma Ravichandran engrossed in balakbhav (childlike emotion)unto Shrikrushna while drawing the pictures. This article also explains, through spiritual experiences, how, every activity when performed with spiritual emotion, results in change in subtle vibrations in the surroundings.

Different types of bhav (Spiritual emotion) expressed by the body-language of Shrikrushna and the small girl in the pictures drawn by Mrs. Uma Ravichandran

2. Experiencing that the promises of Shrikrushna to the devotees have come true in respect of Mrs. Uma

A. The first promise of Shrikrushna to the devotees:
‘Get engrossed in my kirtan and be assured that you will forget the world.’

Mrs. Uma has performed spiritual practice with bhav, faith and yearning. Hence, living upto the promise to His devotees, Bhagawan Shrikrushna has showered blessings upon Mrs. Uma and bestowed upon her atmanivedanbhakti. On the strength of this bhakti, Mrs. Uma learnt the art of drawing by the Guru’s grace, and it is manifesting in the form of extremely beautiful pictures depicting bhav.

B. The second promise of Shrikrushna to the devotees :
‘Have faith in me and be assured you will be showered with pearls of knowledge !’

1)Description (in Hindi) of Kaliyug by a poet

A. Literal meaning (of the lines in Hindi) : Shriram says to Sita, “The time in Kaliyug will be so bad that a swan will be forced to eat grains and a crow will have the benefit of pearls”.

B. Implied meaning : Shriram says to Sita, “The time in Kaliyug will be so bad that the evildoers such as tyrants, corrupt, rapists, thieves will enjoy pleasures of life, and the virtuous and honest individuals will be deprived of pleasures and amenities”.

Man in Kaliyug has proved true the literal meaning of the lines in Hindi. Despite possessing knowledge, well-deserving individuals are ignored and they are forced to run from house to house to earn a living; whereas, the undeserving amass wealth and fame on the strength of power. This is the state of affairs in most fields. The whole country is in ruins because the deserving are given low posts and the undeserving obtain high posts.

2)Who cannot be compared?

Opponents of God, that is, atheists are like a crow who crows; whereas, the devotees of God remain restrained, calm and stable like the theist rajhans. Since unrighteousness has an upper hand in Kaliyug, the true devotee of God is often made to pass rigorous tests. The rajhans in the form of a devotee, who has steadfast faith in God and passes the test of devotion, is showered with pearls of knowledge by Shrikrushna. By showering pearls of knowledge, God proclaims to the entire world that the devotion of rajhans is worthy of the special grace of God.

4) Shrikrushna’s promise and a quote by Prabhu Shriram to Sita are proved by the example of Sanatan’s lady-seeker Mrs. Uma

Pearls of knowledge showered by Shrikrushna on Mrs. Uma in Kaliyug proves that like the other individuals in Kaliyug, she is not a crow but a superior rajhans. Just as an expert accurately locates a diamond in a coal mine, it is only the Paratpar Gurus and God who can identify a Dharma-abiding rajhans from the crowd of crowlike unrighteous individuals. While remembering Shrikrushna with utmost bhav, Mrs. Uma goes into a meditative state and forgets the world. It is due to her steadfast faith in Bhagawan Shrikrushna that she is showered with pearls of supernatural knowledge. Indeed, great is the God who lives upto the promises He made to the devotees and great are devotees like Mrs. Uma who have steadfast faith in God’s promise.

Atmanivedanbhakti of Mrs. Uma leads to unexpressed madhurabhakti, which in turn awakens balakbhakti (Devotion of a child) in her, and as a result, through her pictures, innumerable colours of spiritual emotion and devotion are lavishly showered in a very graceful, beautiful and sweet manner.

Mrs. Uma has imbibed the art of drawing by Shriguru’s grace and hence, the drawings are complete. Due to the completeness in drawings, sharp figures, eyes that speak, emotions on the face are captured flawlessly and they take the form of a picture. In addition, various waves of spiritual emotion of deep atmanivedanbhakti unto God preserved in the heart appear on the paper through picture depicting bhav, and they indicate auspicious symbols of devotion. Mrs. Uma’s devotion is like the artistically embellished, beautiful and incomparable Radha. Like the Krushnakamal, her devotion is all-encompassing and perfect. The reflections of nine-fold devotion are noticed in the madhurabhakti of Mrs. Uma, the seven musical notes reverberate and the nine forms of dance manifest. Her pictures, which are filled with the nectar of bhav unto Shrikrushna to the brim, are the sagun (Materialised) reflection of her bhav-enriched antahakaran (The inner sense organs consisting of the conscious mind, subconscious mind, intellect and ego).

While getting engrossed in devotion unto God in our spiritual life, all the sanskars (Subconscious impressions) on our chitta (Subconscious mind) begin to fade. When the utmost point of devotion is reached, the desire-predominant particle of egoistic inertia of the mind also collapses in the end, and the mind of a devotee becomes pure, pious and flawless like that of an innocent child. The atmanivedanbhakti of Mrs. Uma leads to unexpressed madhurabhakti, which in turn awakens balakbhakti in her. Through her pictures, innumerable colours of spiritual emotion and devotion are lavishly showered in a very graceful, beautiful and sweet manner. Mrs. Uma is an invaluable pearl of Krushna, Sanatan has ever received.

A. That Mrs. Uma first draws the eyes of Shrikrushna and
of the girl depicting balakbhav and then draws the face is a sign of the fact that
she gets the strength of Tejtattva (Absolute Fire Principle) before drawing a picture

While drawing pictures, Mrs. Uma first draws the eyes of Shrikrushna and of the girl depicting balakbhav and then draws the faces, other parts of the body, clothes and in the end the ornaments. It is very difficult to first draw the eyes and then complete the picture. Eyes are associated with Tejtattva. While drawing pictures, Mrs. Uma gets the strength of Tejtattva from Shrikrushna through the medium of the eyes and then completes the pictures. As a result, all the pictures seem to be decorated with spiritual radiance.

B. Perceiving that Mrs. Uma transforms into a steady picture herself
and draws the picture of Shrikrushna; due to the virtue of getting completely
engrossed (in an activity), her pictures have Sattva component in a greater proportion

Mrs. Uma moves her hands very little while drawing a picture. She is completely steady, as if she herself has transformed into a steady picture and is drawing a picture of Shrikrushna. Such is the extent of her merger with the vibrations of the picture. Due to this quality of getting completely engrossed, her pictures have Sattva component in a greater proportion.

C. I dreamt of massaging the Holy feet of Shrikrushna, and when I saw
a picture drawn by Mrs. Uma of a lady-seeker depicting balakbhav massaging
Shrikrushna’s Holy feet, I realised the meaning of the spiritual experience through the dream

Mrs. Uma was to leave for Chennai on 16.9.2012. It would have taken one and a half hours for her to reach the airport by a four-wheeler. I said to her, “Mrs. Uma, in this one and a half hours, you can complete one more picture”. She instantly agreed. While taking the afternoon nap, I dreamt that I began to massage Shrikrushna’s Holy feet. When I woke up, I saw that a picture drawn by Mrs. Uma was kept next to my head. I saw in the picture that the lady-seeker depicting balakbhav was massaging the Holy feet of Shrikrushna. I realised then, the meaning of the spiritual experience I had in the dream.

5. Picture depicting the spiritual process taking place
in the mind of the lady-seeker when Mrs. Uma was drawing the picture of Shrikrushna

A. Mrs. Uma’s mind is pure (or unblemished), and while drawing pictures of Shrikrushna, she forgets the existence of her mind and intellect. She is constantly in communion with Shrikrushna.

B. While drawing the pictures of Shrikrushna, she has the bhav that Shrikrushna is present by her side.

D. Spiritual experience – While looking at Mrs. Uma drawing the picture of Shrikrushna, I perceived that she was not on the earth and has completely merged with Shrikrushna and I had the spiritual experience of Anand upon looking at her: I saw Mrs. Uma sitting in the Art section and performing seva. (Mrs. Uma had come to Sanatan’s Ramnathi Ashram, Goa during August-September 2012 for performing the seva of Sanatan’s Tamil Almanac. – Compiler) I perceived emission of bhav from her. When I passed by her, I had the same experience again. Hence, curious to know what seva she was performing, I went to her. I saw that she was drawing a picture of Shrikrushna and her bhav had awakened. I could visualise Anand on her face and bhav unto Shrikrushna in her eyes. Upon looking at her, I too experienced Anand.

Place where Sitamata had undergone Agni-pariskha for proving her chastity !

seva
Service unto the Absolute Truth, that is, God Principle
Sanskars
Subconscious impressions
Kaliyug
Era of strife (The present era, amongst the four eras)
Dharma
Righteousness
Ashram
A place where a seeker can remain engrossed in spiritual practice through spiritual discipline
Anand
Bliss
Sattva
One of the three components in the universe, signified by purity and knowledge