While preparing Naivedya (Food offered to the Deity as part of puja), less amount of red chilli powder, salt and oil should be used; sattvik (Sattva-predominant) substances such as ghee (Clarified butter) should be used in ample quantity. Banana leaf should be used for offering Naivedya. Salt should not be served on the leaf prepared for Naivedya to a Deity.

Thereafter, pour little water into the tamhan (Round metal dish) from the right hand, and once again recite the mantra ‘Om Pranaya……’ associated with Panchapranas.

1. What should be the bhav of the individual who offers Naivedya ?

Bhav (Spiritual emotion) is important when offering any food item to a Deity. Greater the bhav of the individual offering Naivedya, greater is the possibility of the food being consumed by the Deity. While offering Naivedya, we should have a bhav that the Naivedya being offered by us is reaching the Deity and the Deity is consuming it.

2. Placing the banana leaf when offering Naivedya to the Deity 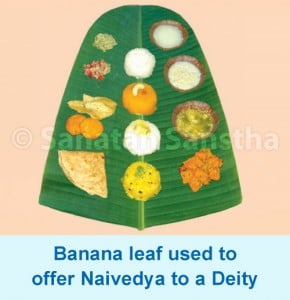 Naivedya is offered to a Deity on a banana leaf. When compared with the stalk of a banana leaf, its tip has greater ability to emit sattvik waves. Sattvik waves emit from the tip of the banana leaf like a fountain. These fountain-like waves help in reducing the proportion of Raja-Tama components in the environment around the jiva. Hence, while offering Naivedya to the Deity, the stalk of the leaf on which the Naivedya is served should be towards the Deity and its tip should be towards us.

3. Why are tulsi leaves used while offering Naivedya to a Deity ? 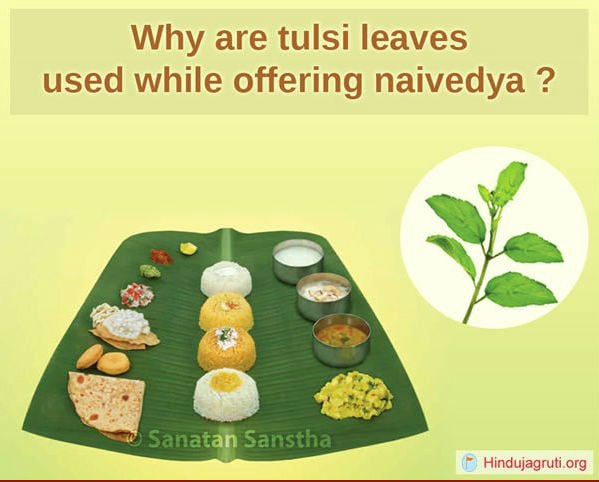 When tulsi leaves are used for offering Naivedya to a Deity, it reaches the Deity faster, Naivedya becomes sattvik and the possibility of attacks due to negative energies reduces. The tulsi plant has a greater ability to attract sattvikta from the atmosphere and effectively emit it towards the jiva. It also has a greater ability to attract the Krushṇatattva in the universe. By using tulsi leaves for offering Naivedya, the subtle-waves emitting from the sattvik food are imbibed by the leaves. Thereafter, by offering the tulsi leaves enriched with the subtle-waves to the Deity, the Deity Principle is easily able to absorb these waves. In this way, the food offered by us easily reaches the Deity through the medium of tulsi leaves and this helps in pleasing the Deity faster. When a tulsi leaf is placed on the Naivedya with bhav, due to its inherent qualities the leaf imbibes the Chaitanya (Divine consciousness) emitting from the Deity and effectively transmits it into the Naivedya. Consuming such Naivedya helps the body of the jiva to obtain waves of Chaitanya.

4. Why should the eyes be closed while offering Naivedya to a Deity ?

The sight of food leads to a desire to eat it. To avoid this and be able to offer pure Naivedya devoid of any desire to the Deity, eyes should be closed while offering Naivedya to a Deity.

5. Transformation of Naivedya into Prasad

First, the Deities activate the Akashtattva (Absolute Ether Principle) present in them, because it helps awaken the other Principles. Next, as per the need, Vayutattva and Tejtattva are awakened. Deities consume the Naivedya through the medium of these awakened Principles.

A. When Naivedya is placed in front of the Deity, they consume it through the Vayutattva.

B. Since fire is kindled in homa-havan (Fire-sacrifice performed to appease Deities), the Deities consume the Naivedya through the awakened Tejtattva in them.

When the Naivedya is consumed by the Deities, due to their subtle touch it gets transformed into Prasad (Holy sacrament).