Akshata has the ability to attract the frequencies of the five Deities in the Universe (Ganapati, Shri Durgadevi, Shiva, Shriram and Shrikrushna), to activate them, make them functional and to transmit them with the help of Pruthvitattva (Absolute Earth Principle) and Apatattva (Absolute Water Principle). Hence, akshata is sprinkled on every component of the ritualistic worship, so also on the Idol of Deity after the Panchopacharpuja (Ritualistic worship involving five steps) or shodashopchar puja and after activating the divinity in all of them, they are invoked to become functional. In the absence of any substance in apanchopchar puja, akshata is used as a substitute. Akshata is a medium that encompasses all the Deity Principles and hence is an important allen compassing medium in ritualistic worship. (Through the medium of Mrs. Anjali Gadgil, 20th November 2004, 8.59 p.m.)

Because of the energy in the Deity, when akshata is offered to them, benevolent energy and vibrations develop in the akshata. If a string of a sitar, among a pair of similar frequency sitars, is sounded then the same sound is emitted from the other sitars too. Similarly,once frequencies develop in the akshata due to energy of the Deity,same waves develop in the stock of rice in the house. This energised rice can then be consumed throughout the year as prasad.

Why are only unbroken rice grains used as akshata in ritualistic worship ?

When an object is broken or cut, its ability to attract distressing energies from the Universe is enhanced. It gets loaded with Raja-Tama particles. Consequently, there is a possibility of an individual suffering from distress due to negative energy. That is why in Hinduism special importance is given to wholeness of objects.Breaking an object signifies a tama attitude. Such an act is forbidden in religious rituals. If instead of unbroken rice grains, broken rice grains are used as akshata their ability to attract the Principles of superior Deities in the Universe is automatically reduced. Consequently, the benefit of the Principles of superior Deities to the worshipper is reduced.Naturally the bestowal of grace and blessings by the Deities on the worshipper is also reduced. Hence, it is appropriate to use akshata of unbroken rice grains in the ritualistic worship.

Why is white akshata offered to Lord Satyanarayan and Deity Shiva and
usually red akshata (tinted with vermilion) offered to Shri Ganapati and other Deities ? 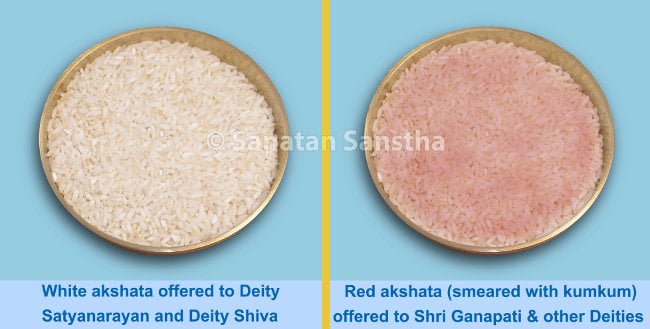 White akshata represents extreme vairagya (detachment),meaning, a symbol of nishkam spiritual practice. Red akshata represents sakam spiritual practice. Generally white akshata is used to attract waves of the main superior Deities,maximally related to the nirgun. These waves from the Universe are subtler, while those attracted by the akshata tinted with vermilion are subtle. Since the Principles of Satyanarayan (Shrivishnu) and that of Deity Shiva are associated with waves of karma (An act)and dnyan (Knowledge) respectively, white akshata representing worship of the nirgun (Non-materialised), are used in their worship.

The Principle of Shri Ganapati or Deity Shri Durga gets attracted to red colour faster than other colours. All colour particles have greater ability to attract the sagun waves of a Deity.Hence, red akshata are preferred in the worship of Shri Ganapati or Devi Durga. (Through the medium of Mrs. Anjali Gadgil, 1st January 2005, 10.16 p.m.)

Reference : Sanatan’s Holy Text ‘What is the importance of the substances used in ritualistic worship’

Tama
One of the three components in the Universe denoting inertia and ignorance
Shodashopchar puja
Worship with sixteen substances
Prasad
Offering made to God and then distributed to devotees
Karma
An act that becomes destiny, meaning, leads to a give and take account that has to be settled
Akshata
Unbroken rice grains smeared with vermilion used in ritualistic worship