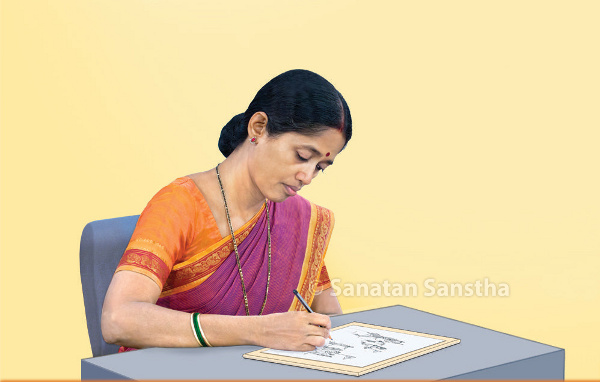 Mrs. Uma Ravichandran experiences the very presence of Shrikrushna at each step as she herself is deeply immersed in Spiritual emotion while drawing pictures depicting balakbhav(childlike emotion). The article contains the various aspects learnt by Mrs. Uma while drawing the pictures. These aspects will definitely help the readers in awakening their Spiritual emotion.

In Sanatan’s workshop on ‘bhav’ (Spiritual emotion) in Chennai on 17.7.2012, I was told to present some aspects about bhav I was experiencing. When I prayed to Shrikrushna and began to note aspects about bhav, I was inspired to draw some pictures. Upon seeing these pictures, my own bhav awakened. Within almost two hours, I completed 4 pictures. Bhav of the seekers who attended the workshop also awakened upon seeing these pictures. When Shriguru saw these pictures, He too liked them. With the objective that seekers get to experience the balakbhav I was experiencing by Shrikrushna’s grace, the experiment given ahead was conducted in the workshop.

I said to the lady-seekers, “Let us close our eyes and have bhav that I am a 3-year-old girl and am related only to Shrikrushna. I am wearing traditional attire consisting of ghagara (A Bharatiya dress of girls) and a blouse, anklets and bangles. Shrikrushna, who is an ocean of compassion and takes care of a devotee like a mother would, is always with me. He has become my mother as well as father and is taking care of me with extreme love.

1. It is only when I am thirsty or hungry, feeling sleepy or am injured, that I rush to Him; however, wherever He is, He constantly thinks only of me.

2. When I wake up in the morning, He washes my mouth and wipes it with his pitambar (Yellow silk
dhoti [A Bharatiya clothing]). He bathes me and dresses me.

3. He places my tiny feet on His lap and adorns them with anklets.

4. He feeds me curd-rice, which is as soft as butter.

5. I try to put a garland of basil leaves brought by one of His devotees around His neck; but my hands do not reach there. Then, He Himself bows and accepts the garland and jocularly pats my cheeks lightly. He then places the garland on my small shoulders. The garland reaches my feet.

6. Since Shrikrushna is the Master of the entire universe, many individuals are arriving for His darshan (Vision). He is sitting under a tree and is at complete peace. I am playing near His Holy feet. I am collecting the soil under His feet and trying to make houses, castles etc. from it. In the end, I smear myself with all the soil. The fragrance of the soil (smeared on my body) is filling the environment.

7. Shrikrushna is playing and dancing with me.

8. He takes me on His lap and pats me on my head with one hand, massages my legs with the other and puts me to sleep.

He thus cares for me the whole day. Like a little girl who is entirely dependent on her father, I too am going to be taken care of by Shrikrushna in all respects and hence, I am fearless.”

I express my infinite gratitude unto the Holy feet of Shriguru for having given me this Divine spiritual experience.

B. While making efforts for awakening bhav, when I saw rangoli depicting balakbhav
in the Holy text ‘Sattvik Rangoli’, balakbhav was slowly generated in me and
I perceived that it is Shriguru Himself who is the inspiration underlying the balakbhav

I visited Sanatan’s Ashram at Ramnathi, Goa, during August-September 2012 for performing the seva of Sanatan Almanac in Tamil. ‘Seekers from the Art section are striving day and night for completing the seva of Tamil Almanac and I have also come here for performing this seva. How then was I suddenly inspired to draw these pictures ?’ – While I was thinking thus, I realised that all this was the consequence of Shriguru’s resolve. On the very first day of my arrival in the Ashram, Shriguru asked me to draw more pictures on the remaining pages of my sketchbook.

Many seekers in the Ashram asked me how was balakbhav generated in me? After pondering over this question, I realised that Shriguru Himself sparked the balakbhav in me. While I was making efforts to awaken bhav in various ways, I happened to see a rangoli depicting balakbhav in Sanatan’s Holy text ‘Sattvik Rangolis which attract and emit Deities’ Principles’. Thereafter, balakbhav developed in me gradually.

C. It is entirely Shriguru’s grace that I am able to draw pictures;
the picture drawn in the meditation room is the consequence of
the Ashram’s Chaitanya and just as every part of Shrikrushna’s body
is filled with sweetness, Ramnathi Ashram too is replete with Chaitanya

I realized that the pictures depicting balakbhav which I drew initially were entirely by Shriguru’s grace and I even experienced this aspect. The picture titled ‘Shrikrushna narrating how to perform the worship of Shri Ganesh Chaturthi with bhav’ was drawn by me in the meditation room, and at that time I experienced that it is the consequence of Ashram’s Chaitanya (Divine consciousness).

The Ashram is filled with so much Chaitanya that on the advice of Shriguru, a seeker will not only wipe the bathroom tile with a cloth, but will also sit there and have meals. In the Holy text ‘Madhurashtakam’, Shrikrushna has been described as the one who’s every part of the body is filled with sweetness. Similarly, Ramnathi Ashram too is replete with Chaitanya.

Drawing a picture with the inspiration of collective awakening of bhav of seekers in the Ashram; when Shriguru saw the picture, He jocularly said, ‘The seekers will be jealous of the young girl in the picture’; however, upon seeing the pictures, instead of feeling jealous, bhav of seekers was awakened and they experienced Anand

On 14.9.2012, I drew a picture depicting Shrikrushna being massaged. I perceived that I drew the picture with the inspiration of collective awakening of bhav of seekers in the Ashram. This picture is nothing but the collective awakening of bhav of all seekers in the Ashram. Upon seeing the picture, Shriguru jocularly said, “The gopis in the Ashram and I will be jealous of the small girl you have drawn”. It was only later that I realised why He said so. I realised that He expected me to contemplate over this and learn something from it.

Normally, a little jealousy about someone is natural; however, I realised that just the opposite has happened here. Instead of becoming jealous upon seeing the picture, every seeker’s bhav awakened and they experienced Anand. They became curious about how to remain in a state of constant bhav. The seekers were asking me many questions in this regard; but I did not know the answers. I had the inspiration of drawing this picture from the collective bhav of the seekers. Later, I realised that the seekers in the Ashram are no ordinary human beings; they are an army of Gods, Sages and Seers who have taken birth on the earth along with the Incarnation of Bhagawan Shrikrushna.

Due to Shriguru’s question, I became introverted and was encouraged to contemplate

On 9.10.2012, Ms Priyanka Lotlikar narrated to me the words of Shriguru when He looked at the picture of ‘Bhagawan Shrikrushna consecrating Deity Muruga (Kartikswami) with milk’. The question was ‘How do the ‘Raginis’ (name of the child) in the picture of consecration of Deity Muruga and Uma in other pictures look similar ? Are they twins ?” This question made me introverted and I was encouraged to contemplate. I could learn some aspects. Shriguru’s methods and medium of teaching are all unique and extraordinary.

Place where Sitamata had undergone Agni-pariskha for proving her chastity !