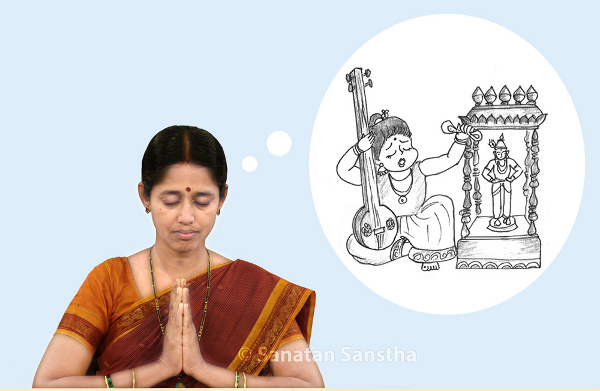 1. Qualities essential for vyashti sadhana
(Individual spiritual practice that benefits only the seeker undertaking it)

A. Steadfast faith in Shriguru and Shrikrushna

There are very few Sanatan’s seekers in Chennai and the city is also very big. Yet, Mrs. Uma Ravichandran and other seekers always make efforts to carry on the Guru’s mission with enthusiasm and earnestness. Sanatan’s Almanac in Tamil is also receiving good response from the society. In Chennai, three satsangs (Company of the God Principle) are conducted every week. Many activities of the Sanstha are regularly implemented there. When asked, how she can take up so many activities despite less number of seekers, Mrs. Uma replied, “We are not doing anything. It is Shrikrushna and Shriguru who provide us with the energy and get everything done through us”. These words made us realise her steadfast faith in Shriguru and Shrikrushna.

B. Intense yearning for the Guru’s mission
keeps Mrs. Uma busy with many sevas (Service unto Absolute Truth)

Mrs. Uma is busy with not just spreading Spirituality, but various other sevas too, such as contacting devout Hindus, getting advertisements and getting sponsors for other activities.

Despite being rich, Mrs. Uma leads a simple life; for example, travelling in a non-AC car, a simple diet etc. Many a times, she is prepared to travel for seva on a two-wheeler even in the scorching sun.

Mrs Uma is talented and versatile. She displays her proficiency in every act, such as spiritual discourse, drawing, singing, playing Veena (A musical instrument), driving a two-wheeler or a four-wheeler etc. Yet, she has no ego about her skills. Though selected as a speaker (for a discourse) for important celebrations such as Gurupournima (Full moon day of the month of Hindu lunar month of Ashaḍha), she has performed other sevas too, such as cleaning and decorating the hall.

E. Always being in a state of awakened bhav

Mrs Uma performs every seva with bhav. Once, while she was speaking about balakbhav (childlike emotion), bhav of every seeker present at the venue awakened. She is always in a state of bhav. Whenever she speaks about Shrikrushna or Shriguru, her bhav awakens. – All seekers in Chennai.

F. Asking her daughters residing overseas
to have faith in Shriguru and inspiring them to perform Spiritual practice

Mrs Uma has two daughters. One works in USA, while the other studies in Singapore. When they face some difficulty, she guides them with love and reminds them about spiritual practice each time. She inspires them by saying, “Have faith in Shriguru. He is with you. He will take care of everything”.

G. Not taking credit for her achievements
and saying that everything is going to happen as per God’s wish

Once I said to her, “Mrs Uma, I feel we will soon get the good news (about her attaining spiritual level of 60%) from Chennai”. She replied, “Everything as per God’s wish! I am not doing anything. I do only whatever is possible for me. Everything will be done by Shriguru”. While saying this, she became teary-eyed. Seeing her bhav towards Shriguru, my bhav also awakened.’ – Mrs Smita Navalkar, Sanatan Ashram, Panvel. (September 2012)

(Mrs Uma attained the spiritual level of 61% on 3.9.2012 and was thus liberated from the cycles of birth and death. – Compilers)

A. Leadership quality and kshatratej

An entirely different form of Mrs Uma as ‘Rani of Jhansi from Chennai’, who otherwise effortlessly draws pictures displaying balakbhav that depicts devotion unto Shrikrushna.

‘Her skill of getting satseva performed from seekers through appropriate coordination is admirable. She guides seekers new to spiritual practice well. She has also bonded well with activists of various Hindu organisations and devout Hindus, and has maintained the bonds.

2. Kshatratej (Radiance of a Kshatriya [Warrior]) and kshatravrutti (Fighting spirit)

Mrs Uma has plenty of kshatratej. Her voice also reflects a lot of kshatravrutti. She expresses spiritual perspectives fearlessly. She was not afraid when the shadow of a ban was over Sanatan Sanstha. Similarly, the words ‘ban’ and ‘Police’ have no effect on her. Be it driving a two-wheeler at night or visiting a remote village to spread Spirituality, she is always at ease. She is always very enthusiastic. For us, she is like ‘Rani of Jhansi’. After attending the ‘All India Hindu Convention’ (for establishment of the ‘Hindu Nation’) at Ramnathi, Goa, she encouraged us to perform sevas of ‘Hindu Organisations’ at Chennai and obtain the Guru’s grace.

Her speech always demonstrates her kshatravrutti. During protests, even when the presence of men in the crowd is more, she speaks fearlessly. Whenever and wherever there are protests concerning the Nation and Dharma under the aegis of ‘Hindu Janajagruti Samiti’, she is prepared to lead the protest. She expresses her opinions fearlessly.

Mrs Uma cares a lot about all the seekers. If a seeker comes to Chennai, she is ever ready to make the boarding arrangements at her house. If she wishes to refuse doing something, she is skilful enough to explain it to the individual without hurting him in a gentle manner and smilingly. She has a bhav that ‘Everyone should progress spiritually’ and encourages the seekers to do so. She bonds with the family members, seekers or devout Hindus. She balances household responsibilities and spiritual practice very well.

– All seekers in Chennai

3. Mrs Uma – A fine blend of a good lady-seeker and a seeker in a childlike state

I saw the pictures of Shrikrushna displaying balakbhav drawn by Mrs Uma in July 2012. I realised the innocent balakbhav in her. My earlier experience of Mrs Uma was that she was a lady-seeker with seekership qualities; but now, upon looking at the pictures drawn by her and reading the article about her balakbhav in ‘Dainik Sanatan Prabhat’, Shrikrushna showed me a new facet of another unique lady-seeker of Sanatan. I realized that Mrs Uma was a fine blend of a good lady-seeker (Useful for the samashti mission) and a seeker in a childlike state (Who is in balakbhav at the individual level). – Mr Suyog Athavale, Sanatan Ashram, Ramnathi, Goa. (11.9.2012)

Since Mrs Uma has all types of bhav such as kshatrabhav (Spiritual emotion of a warrior), balakbhav, vatsalyabhav (Spiritual emotion of maternal love), my worry about establishing the Divine Kingdom is over, says Shriguru: Mrs Uma was to leave for Chennai on 16.9.2012. Before that she met Shriguru. While narrating the spiritual experience of another lady-seeker to her, Shriguru said, “You have balakbhav; another lady-seeker too has kshatrabhav”. At this Mrs Uma said, “My daughter calls me Lady Bhagat Singh”. Hearing this, Shriguru said, “I was worried how the Divine Kingdom will be established if all seekers have gopibhav (Spiritual emotion of the gopis who were supreme devotees of Shrikrushna) and balakbhav ! Now my worry is over; because you have all types of bhav – kshatrabhav, balakbhav, vatsalyabhav. God has taught me through your medium how one individual can have various types of bhav”. – Ms Priyanka Lotlikar, Sanatan Ashram, Goa. (18.9.2012)

A. Mrs Uma Ravichandran has drawn bhav-enriched pictures of Shrikrushna despite the fact that she does not have a formal education of the art of drawing. As sadhana (Spiritual practice) progresses, the proportion of bhav unto God in a seeker also increases. God creates in the seeker the art in which he can express his bhav intensely. Then the art bestows Bliss upon others and their bhav is also awakened. The pictures of balakbhav drawn by Mrs Uma Ravichandran also have this quality. Several charming pictures depicting her engrossment in devotion unto Shrikrushna like a girl-child playing with Him, worshipping Him, dancing with Him etc. are given in these articles.

B. Mrs Uma Ravichandran’s pictures are the one and only example of expressing balakbhav in an indescribable manner through the medium of pictures in the history.

C. The characteristic of Mrs Uma is that she is in balakbhav only at the time of drawing a picture. Later, while carrying out the familial and prasar (Spread of Spirituality) responsibilities she is in a different bhav. As a result, she can perform both the vyashti sadhana and samashti sadhana equally well and hence, she is progressing fast.

seva
Service unto the Absolute Truth, that is, God Principle
Samashti sadhana
Spiritual practice for the spread of Spirituality
Dharma
Righteousness
Ashram
A place where a seeker can remain engrossed in spiritual practice through spiritual discipline