1. Name imparted by the Guru

A. We can not understand which Name is best suited for our spiritual progress. Only the Guru is capable of guiding on this.

B. Chanting the Name of our favourite Deity helps only in increasing the Sattvacomponent, while the Gurumantra helps us realise the attributeless, meaning – reach the state beyond the three components) .

C. The Gurumantra does not consist of mere letters. It contains Divine knowledge, Chaitanya and the Guru’s blessings, and therefore spiritual progress is faster. This Name containing Chaitanya is called a sabij (With the seed) Name or a Divine mantra. To obtain the fruit from the ‘seed’, it is mandatory to perform spiritual practice.

D. It is because of faith in the Guru, that we chant the Gurumantra with greater faith than any other mantra. Besides, remembering the Guru, reminds us to chant and thus the chanting increases.

This will be clear from the following points :

A. No Saint has recommended chanting of His own Name or that of another Saint.

B. History records no instance where a temple has been built in the name of a Saint or a Sage. Temples have been built only of Deities. Now-a-days however, a trend has set in, that of building temples in the memory of Saints.

C. Since the law of creation, sustenance and dissolution is applicable to Saints as well, their Shakti (Divine Energy) exists only for a limited period of a few hundred years. Thereafter, they do not respond to the devotee’s call. As against this, Deities are eternally present, from the creation of the universe to its dissolution.

D. Saints beyond 70% spiritual level are born for a specific mission, for which they possess the required manifest energy. Someone chanting the Name of such Saints may experience distress due to the manifest energy. A Deity usually has more of unmanifest energy and therefore, chanting the Name of Deities does not cause any distress. Besides, a seeker does not aspire for Shakti; he yearns for Anand and Shanti (Peace). (Because of Saints with a spiritual level of 80 and 90 percent one can get the spiritual experience of Anand and Shanti.)

3. Chanting the Name of Ishtadevata

The Kuladevata whose Name is conducive for spiritual progress or the Deity whose Name is given by the Guru as Gurumantra for chanting, is known as the Ishtadevata. In Spirituality, benevolence is in regard to spiritual progress. However, an average person considers the Deity bestowing worldly benefits or the favourite Deity to be the Ishtadevata. If we are not aware of the Name of the Kuladevata, we should chant the Name of the favourite Devta/Deity or chant ‘Shri Kuladevatayai Namaha’.

Once chanting of the Ishtadevata’s Name is completed, the seeker meets a Saint who tells him the Name of the Kuladevata or the Guru Himself comes into the seeker’s life and blesses him with a Gurumantra.

4. Name of a Deity which is essential for further spiritual progress 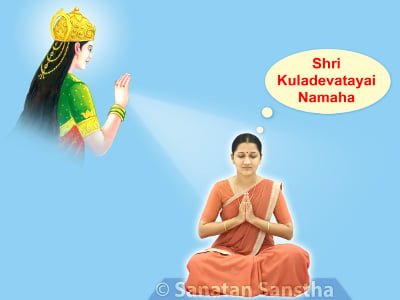 4A. Worship of the family deity (kuladevata)

The Deity chooses each individual to be born in that kula (particular family) whose family deity he needs to worship so as to make spiritual progress. Worship of the family deity also alleviates the intensity of the destiny which accompanies each one till the last breath. Due to these two main reasons, instead of any other spiritual practice, one should worship the kuladevata (family deity) in order to be blessed by a Guru. To achieve this end, one should perform its puja (ritualistic worship), chant stotras (verses) in its praise, parayans (recite holy books periodically), darshan (visit the temple) as often as possible, etc.

5. Those performing samashti sadhana should chant the
Name of superior Deities to eliminate distress due to negative energies

The efforts for individual spiritual practice are called ‘Vyashti sadhana’ and the efforts for the spiritual upliftment of the society are called ‘Samashti sadhana’. Vyashti sadhana means chanting the Deity’s Name, attending satsangs, meditation etc. Samashti sadhana means efforts for the spread of Spirituality, protection of the Nation, awakening of Dharma etc. In Kaliyug, samashti sadhana and vyashti sadhana have 70 percent and 30 percent importance respectively. War between Deities and demons (Righteousness-unrighteousness) has been going on from times immemorial. When a seeker becomes Sattva-predominant after performing samashti sadhana for 2 years, he begins to suffer from distress due to negative energies (Ghosts, pishachha etc.). The reason is, if someone attains Moksha (Final Liberation) while performing vyashti sadhana, the demoniacal energies are not much bothered about it; however, if the seekers perform samashti sadhana, the Raja-Tamacomponent in the atmosphere decreases and the Sattvacomponent increases. Angry due to the distress caused by this change, the demoniacal energies attack the seekers. (Seekers of Sanatan Sanstha are performing samashti sadhana with a lot of devotion for over 15 years now and are facing opposition from negative energies the most).

To conclude, after performing samashti sadhana for 2 years, a seeker starts facing attacks from negative energies. The easy way to eliminate this distress forever is to chant God’s Name. From amongst the seven superior Deities – Ganapati, Shriram, Maruti, Shiva, Datta, Shrikrushna and Shri Durgadevi – chanting the Name of any of these Deities proves beneficial in eliminating the distress due to negative energies. It is important to have the ability to learn the Name of the precise Deity, whose Name will eliminate the distress. How to identify the precise Name through an experiment is taught in Sanatan’s free satsangs. For a seeker to be able to conduct the experiment, he should have at least some ability to perceive the subtle dimension. After performing spiritual practice for some years, a seeker develops the ability to perceive the subtle dimension; hence, the experiments are beneficial for such seekers only.

seva
Service unto the Absolute Truth, that is, God Principle
Samashti sadhana
Spiritual practice for the spread of Spirituality
Kaliyug
Era of strife (The present era, amongst the four eras)
Dharma
Righteousness
Anand
Bliss
Sattva
One of the three components in the universe, signified by purity and knowledge
mantra
A syllable or words representing spiritual reality or an aspect of God uttered to protect oneself or to achieve a specific goal