The Shrikshetra Kunkeshwar at Devgad in Sindhudurg district is referred to as Kashi of Konkan. Kashi has 108 Shivalingas while Kunkeshwar has 107. This article gives a concise information on this place of pilgrimage. 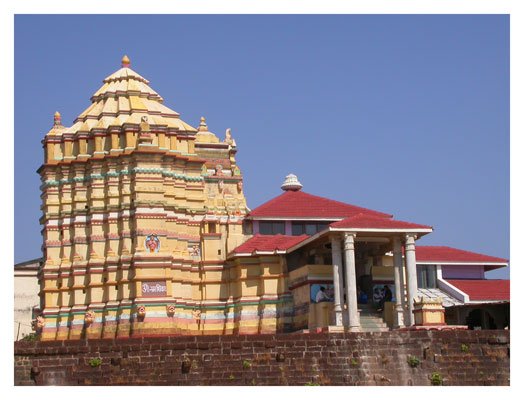 The Shrikshetra Kunkeshwar temple is situated at the seaside in the village of Kunkeshwar. It is located at a height near the foothill of a mountain. The temple is 70 feet tall. This is included in the famous seats of worship of Deity Shiva in the Konkan region. ‘Kunak’ is derived from the word ‘kanak (a flowering tree which grows along forested stream banks)’. It is said that there was a grove of kanak (Bayur) trees at this place.

The legend underlying this place of pilgrimage

Every day a cow belonging to a priest would come to graze in the vicinity of the present day Kunkeshwar temple. It would never give milk at home. To unravel the mystery underlying this, one day the priest followed it. He saw that the cow had released its milk onto a self-manifested stone. He struck the stone with a stick after which it broke, and a small piece flung from it and began to bleed. The stunned priest surrendered unto the stone. Thereafter every day he would offer obeisance to it by lighting a lamp there. The greatness of this place spread far and wide. This is the Shri Kshetra Kunkeshwar of today.

The Shri Dev Kunkeshwar temple came into light before the 11th century B.C. In the context of this temple there is a reference in the Nagdev copper inscription plate as ‘A priest named Devsharma came to the spacious village of Indul (the present day Hindul). The local king honoured him. Thereafter the king acquired abundant wealth and with the grace of Deity Shiva in the form of Shri Kunkeshwar he was blessed with a son’.

The construction of the Shri Dev Kunkeshwar is in Dravidian (Southern) architecture. There is a small temple of Shri Jogeshwari, temple of Deity Shiva in the form of Shri Dev Mandalik and temples of Shri Narayan, Shri Ganesh and Shri Bhairav in the vicinity of this temple.

The cave from Kunkeshwar

In 1920 A.D. some people were digging the land close to the temple at the eastern slope of the mountain at Kunkeshwar when the door to a hidden cave opened. Among the carved marble idols found there are idols in the attire of a warrior wearing jewellery on the head. In the centre is a Shivalinga and Nandi. They are surrounded by statues of their devotees.

There is a temple of Shri Hanuman towards the south of the temple adjoining a lake. When Shriman Labde Maharaj was performing austerities here he saw a vision of this lake. When excavation was carried out at this place a lake with sweet water was found. 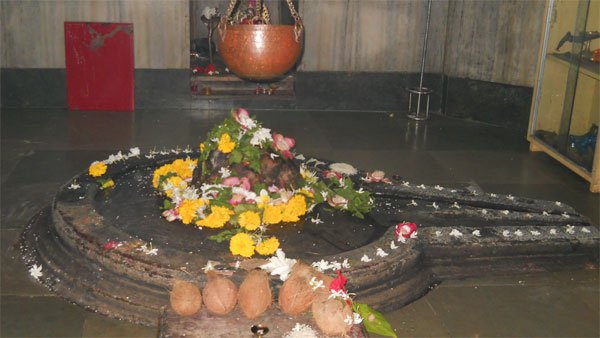 The Shivalingas resembling those from Shri Kashi Kshetra

It is due to the Shivalingas behind this temple that this place is known as ‘Kokan chi Kashi’ (in Marathi). For several years the sea waves have been striking these lingas all year round. Despite this they are intact; have not undergone disintegration. Only 5 to 6 Shivalingas are visible here during low tide. Similar Shivalingas are found on rocks in Kashi too.

Nature of the celebration

Shri Dev Kunkeshwar is believed to be the presiding Deity among the Deities of 72 neighbouring villages. As per tradition, Deities from these 72 villages visit this seat of energy on Shivaratri, to increase their own Divinity. Devotees enjoy this beautiful union of Deities. These Deities reside here till amavasya (No moon day). Devotees of these Deities bathe in the sea and then perform ritualistic worship of Shri Dev Kunkeshwar.