1. What metal should the
implements used in puja be made of ?

1 A. In puja, why is it preferable
to use implements made of copper and brass ?

Stainless steel has the least capacity to absorb the sattvikta and possibility of black energy getting attracted is high.

1 A1. Copper and brass have better capacity to absorb sattvikta

In the earlier times, implements used in worship of Deities were made of copper and brass.

2. Why should we use old implements in puja ?

2 A1. Proximity to Deity’s Idol

Since these implements are always placed in front of the Deity, they can absorb Chaitanya and the sattvikta emitted by the Deity in larger quantities.

These reasons prove that repeated use of same implements benefit the worshipper. Use of such implements charged with sattvikta help ‘awaken’ an Idol or an image of a Deity faster.

2 A2. Principle of only one Deity descending into the implements

At the time of churning of the ocean (known as samudramanthan), Shrivishnu carried the kalash with amrut (Divine nectar of eternal life). All Deities dwell in the kalash. Hence, a kalash is always a part of puja.

‘The platter used for placing niranjan (A peculiar metal lamp-dish with an attached conical stand placed before an Idol) represents Panchapran (Five vital energies) in our body.’

2 D1. Importance of sound from the bell (and the conch)

‘The peculiar shape of the bell and its clapper attract earth waves which accumulate in the peculiar shape. When the bell is rung, these accumulated waves from the atmosphere begin to vibrate and the resultant sound energy attracts the Shiva Principle from the universe. That is, ringing of the bell leads to activation of the Shiva Principle in the universe.’

2 E1. Importance of a conch

The conch is sounded before commencing puja and Arati.

3. Substances used in puja
and arrangement of implements

A. First level – Leaf on which
Naivedya is offered and the platter used for Arati

Leaf on which Naivedya [Food offered to the Deity as part of puja] is offered and the platter used for Arati. 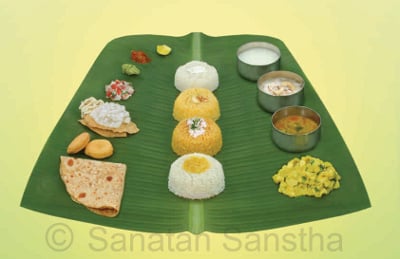 B. Second level – Implements associated
with water – a kalash, a tumbler and a ritualistic spoon

Place these implements in the centre. Water being pure, it is able to absorb nirgun waves of Deity the most. This is referred to as ‘the central channel’ in sagun of the arrangement of implements(Sushumna-nadi), for water in the kalash maintains the appropriate balance of Panchatattvas. Place the platter in the centre and in it to the left of the individual, place the kalash (the functional Energy of the Deity); to the right, place implements like the tumbler, ritualistic spoon that are used in the rituals.

C 1. Niranjan and incense-sticks : Place them to the right of the individual.

C 2. The ghee lamp : Place to the left of the individual.

C 3. The camphor Arati : Place it next to the ghee lamp. The marak fragrance waves emitted by the camphor purify the atmosphere. Hence, the camphor Arati is placed to the left of the individual, that is, to the right side (of maraktattva) of the Deity.

C 4. The coconut : Place the coconut in the centre in close proximity to the Deity. By placing the coconut with its tuft facing upwards, Divine waves from the universe activated by the worship are attracted to it and are emitted into the atmosphere like a fountain, thus purifying it.

D 1. The conch (the functional marak energy of the Deity, the right channel of the Deity)

Place the conch to the left of the individual.

Place the bell to the right of the individual.

Samai (A metal lamp on a pedestal with several wicks)

Place two samais of equal height, one on each side of the temple at home. Preferably use sesame-seed oil to light the wicks in these lamps. Compared with ghee, the Raja component in sesame-seed oil is higher and is an indicator of the activated kriya-shakti of a Deity. The two lamps symbolise the Chandranadi (Moon channel) and Suryanadi (Sun channel) of the Deity. The Deities are mostly affiliated to the Tejtattva. To symbolise this, these lamps are placed on both sides of the temple at home.

4. Advantages of arranging
the implements and other constituents
of a puja according to the levels of Panchatattvas

‘The Panchatattvas are appropriately balanced and controlled and it helps the individual in maximising the advantage of the sagun and nirgun waves emanating from the Deity.

The appeal made to the Deities along with prayers before puja helps the active waves of the respective Deity in the universe to take a sagun form. Depending on the constituent of the Panchatattvas present in them, these Divine waves get attracted to the respective implements in the puja and charge them. It is because of these charged implements, that even the atmosphere surrounding the place of worship gets purified. Further, the physical body of the individual standing within the boundary of this purified environment also becomes sattvik. The combined effect of the sattvik body and sattvik implements helps the individual derive maximum benefit from the Divine waves emitted by the Deity.’

Reference : Sanatan’s Holy Text ‘Temple at home and implements used in the worship of God’