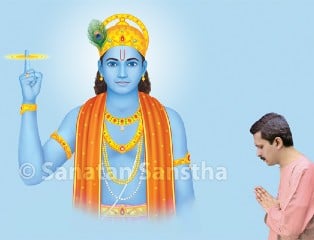 Krutadnyata (Gratitude) is an expression of thanks giving to God. When this expression is maintained all the time, it is called krutadnyatabhav (Spiritual emotion of gratitude). When bhav grows, gratitude gets expressed spontaneously in appropriate words. Before, during and after any action there is continuous underlying awareness that ‘everything happens as per God’s wish and He alone does everything’.

The bhav that ‘I am not performing this action’ and surrendering at the physical and subtle levels is called as Sharanagatbhav (Spiritual emotion of surrender). The seeker who has this bhav does not realise he has it. He thinks only of God every moment. He does not think of himself at all. His actions and thoughts are automatically offered unto the Holy feet of God. The law of the karmaphalanyaya (Cause and effect of our karma) is not applicable to him. Every karma becomes an akarma-karma (An act which does not give rise to destiny). Bhav for God or the Guru gets awakened in any seeker who looks at such a seeker or analyses his actions and that seeker experiences Anand (Bliss).

When a seeker has krutadnyatabhav, his ego does not increase at all. Since a seeker in krutadnyatabhav gives all credit to the Guru or God, the emotion of doership does not get created in him. The less the feeling of doership in a seeker, the more it helps him reduce his ego. Hence, no matter how much spiritual progress a seeker makes, he should not give up krutadnyatabhav unto the Guru. This not only helps him reduce his ego, but also makes it easier for him to attain the egoless state. In other words, the egoless state is ‘Final Liberation’. This is precisely why some Saints write articles or compose hymns and poetry dedicated to their Guru or refer to the Guru in such articles, hymns and poetry. This is also why those studying this matter glorify the Guru of that Saint more than the Saint and feel gratitude towards His Guru.

A. Bhav also grows with surrender in daily incidents
and God gives such a seeker whatever he needs without a prayer

By offering gratitude continuously, the ego of a seeker starts reducing and his krutadnyatabhav starts getting awakened. As the awareness that ‘God alone is the doer and the One who gets things done from me, I am nobody’ takes place consistently in the jiva, the subtle ego starts reducing. The jiva starts becoming aware of its limitations and deficiencies. Hence, in any difficult situation the jiva surrenders unto God with humility and then performs an action. This itself is called ‘surrender unto God’. When a jiva surrenders unto God even in minor situations in day-to-day incidents, its sharanagatbhav grows further. When a jiva prays to God thus – ’O God ! You suggest what I should do, please protect me or You alone can guide me’ due to its sharanagatbhav, God at once responds to the prayer. A seeker who has krutadnyatabhav and sharanagatbhav is never separate from God. God gives such a seeker whatever he needs, that is, spiritual experiences, guidance and knowledge without a prayer.

B. Ego gets destroyed completely in sharanagatbhav

Bhav is of various types. Sharanagatbhav is one of these and is the greatest among all. In other forms of bhav, there is a likelihood of ego increasing, but in this bhav, it gets destroyed completely. That is why, such a seeker makes rapid spiritual progress and attains Sainthood.

C. A jiva that has sharanagatbhav receives the Guru’s
grace and reaches the nirgun (Non-materialised) state in a short time

The ego in sharanagatbhav is low, but it is not always low in unexpressed bhav. Sharanagatbhav functions at the expressed or unexpressed evels as per the need. Sharanagatbhav has a greater ability to attract waves associated with the nirguntattva; hence, the duration for which Chaitanya (Divine consciousness) remains in the physical body is also more. Guru’s grace is showered greatly on a jiva who has sharanagatbhav, and the jiva reaches God, that is, the nirgun in a short time.

The best example of this is Deity Hanuman, the devotee of Shriram. Along with all virtues essential for an excellent disciple, He had yearning and sharanagatbhav. Besides this, He was devoid of ego. Hence, Shriram perpetually showered His grace on Deity Hanuman and He was His favourite devotee.

D. Sharanagatbhav is essential for samashṭi sadhana (Spiritual practice for spread of Spirituality)

When serving society, there is a high possibility of intense opposition from society as well as negative energies. Hence, a seeker should surrender unto God completely and perform samashṭi seva. Due to sharanagatbhav, a seeker is able to perform a very difficult task with ease since it is God Himself who functions through the seeker who has sharanagatbhav. So, from the perspective of a seeker, to detach himself from Maya (The Great Illusion) he needs to develop sakshibhav first, and then to make samashṭi sadhana effective, he should develop sharanagatbhav.

E. At the time of death, sharanagatbhav is more important than chanting

If at the time of death a jiva has surrendered unto the Holy feet of the Guru, then the journey of this jiva in the other regions will take place faster, because it has already imbibed the sanskar (Subconscious impression) of sharanagatbhav on earth, and it hardly has any fear of increase in ego. Contrary to this, when a jiva is chanting at the time of death, it has subtle ego that ‘I am chanting’. So, when traversing to the other regions, there is a likelihood of its ego increasing. Hence, sharanagatbhav along with chanting is absolutely important. In the state of sharanagatbhav, the jiva is beyond chanting, and along with its journey in the Bhuvarlok (Earth region), the Guru takes responsibility for every moment of its journey in the further regions. This is true ‘Gurukrupayoga’ in the sadhana of a jiva. In this Path, Guru’s grace is showered on the jiva before as well as after death.

3. Guru likes a disciple who has
sharanagatbhav more than one who has krutadnyatabhav

seva
Service unto the Absolute Truth, that is, God Principle
Karma
An act that becomes destiny, meaning, leads to a give and take account that has to be settled
Jiva
Embodied soul
Gurukrupayoga
Path of Guru's grace, which incorporates eight steps
Akarma-karma
Non-act; act in which doership is dispelled
Anand
Bliss