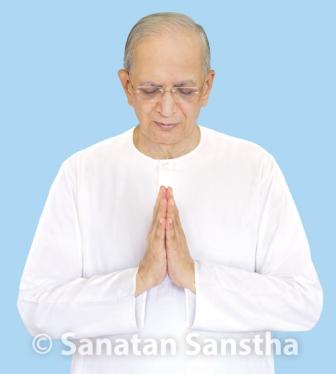 Bha+va = bhav (Spiritual emotion). Here ‘bha’ means Tej (Radiance) and ‘va’ means that which enhances. So ‘bhav’ is that by awakening of which the Tejtattva is enhanced within us. (Here Tejtattva is used synonymously for Parmeshwar [Supreme God] Principle). Bhav means a constant awareness of God’s existence. Bhav is an intense yearning in the jiva (Embodied soul) to realise God.

Praying is important for awakening of bhav. Since through a prayer the atma-shakti (Energy of the soul) of a jiva is awakened and its manomaya-kosha (Mental sheath) gets purified. When the jiva begins to perform sadhana (Spiritual practice), the manaha-shakti (Energy of the mind) in its physical body gets activated & moves towards the Anahat-chakra where it gets converted to atma-shakti. This is referred to as bhav. Finally, it is this very bhav that gives the jiva the true Anand (Bliss) of Spirituality.

1. Bhav means making efforts to
progress towards the state of Sat-Chit-Anand

God does not look at the physical action but at the bhav behind it. That is why, Shriram ate the berries offered to Him by Shabri (an aged ardent devotee) after she had tasted them for their sweetness, and Shrikrushṇa ate the puffed rice brought for Him by Sudama (His poor childhood friend).

3. Devotion and bhav in seekers is
more important than the number of seekers

God does not come to the rescue seeing the number of seekers, He comes running because of bhav. God manifests even when one seeker remembers Him with devotion and bhav. However, He does not manifest even when many people call out to Him for selfish reasons but rewards them based on the fruits of their merits. It is neither easy nor difficult to realise God, because God is always close to His devotee, and just by remembering Him, He creates a seat for Himself in the heart of the devotee.

A seeker who has bhav feels remorse about the mistakes he commits because of his personality defects and remains vigilant about not repeating them.

A. The mind becomes sattvik because of bhav, thus increasing its positivity

Awakening of bhav makes the mind sattvik, that is, increases its positivity.

B. Reduction in ego makes the intellect
sattvik, subsequently keeping it in a learning mode

With reduction in ego, that is, through gratitude, the intellect becomes sattvik and such an intellect always remains in a learning, that is, in a listening mode.

6. Bhav is more important than
the sankalpa while performing a Yadnya

The greater the bhav with which a Yadnya (Ritual of sacrificial fires) is performed, the more pleased Deities and Saints are, and bestow their grace in the form of Chaitanya (Divine consciousness). The more the bhav, the more is the grace’ is the spiritual equation. Thus, bhav has more importance than a sankalpa. Due to bhav, the Sattva component, Chaitanya, result and area of activity of a Yadnya increase quantitatively as well as qualitatively. That is why, a Yadnya performed with bhav on earth encompasses the Saptalok (Seven higher cosmic regions) and Saptapatal (Seven regions of hell). Due to faith and bhav, the effect of one Yadnya is extended to the entire universe. Thus, one Yadnya performed completely with bhav, is an action related to the Saptalok and Saptapatal and due to the Yadnya the Saptalok and Saptapatal try to influence each other with their energy and presence.