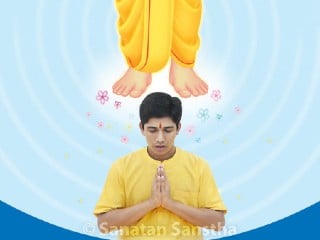 Expressed bhav (Spiritual emotion) means bhav gets awakened in us and manifests in the form of an emotion, thought or action. Bhav gets expressed in eight modes such as becoming still, sweating, goose-flesh, choking of voice, tremors, paleness of complexion, tears or fainting.

When bhav is activated within us; however, it does not manifest with an emotion, thought or action. It exists within the subconscious mind. This is called unexpressed bhav.

Given ahead are some examples of how to speak to God –

A. While cooking, say to God, ‘O God ! I am preparing this Naivedya (Food offered to the Deity in ritualistic worship) for You. Please guide me on how to prepare it so that You like it.’

B. While studying, say to God, ‘O God ! I am studying but my mind is getting diverted. Please make me aware whenever this happens !’

C. In your office (at your workplace), if you feel angry while speaking to someone with personality defects, say to God, ‘O God ! I am losing my temper with this man. Please teach me how to speak to him and get it done from me’.

2. Features of expressed and unexpressed bhav

A. When performing any action Anand (Bliss)
is obtained very easily due to unexpressed bhav

‘Sagun worship generates manifest (Expressed) bhav. When the seeker has greater faith in the capacity of God to carry out tasks in the subtle, he begins to worship nirgun God and unexpressed bhav develops in him. Due to expressed bhav for God, the seeker gets entangled in the sagun form of God. On the other hand, unexpressed bhav leads a seeker to the formless nature of God, that is, nirgun.

C. Depending upon expressed and unexpressed bhav, Chaitanya
(Divine consciousness) is absorbed and emitted by the physical and subtle bodies

D. Output and effectiveness of a seeker performing samashti sadhana is greater

E. Unexpressed bhav is superior to the expressed bhav, because when
bhav is expressed, energy from the kunḍalini is wasted in expressing it,
and since this lasts for only some time, it is not of much use in increasing bhav

The kunḍalini gets awakened along with bhav. Energy from it is utilised to awaken bhav. This energy is not used for increasing sadhana. Besides, since expressed bhav is short-lasting (for a few seconds), it is not of much use in increasing bhav. This is precisely why, unexpressed bhav (that is permanent) is superior to expressed bhav.

B. Going from expressed to unexpressed
bhav means going from duality to non-duality

The more wholeheartedly a seeker chants and performs seva, the more introverted his attitude becomes. His sadhana takes place subtly and he is drawn from the sagun to the nirgun state of God. His journey is from duality to non-duality and the expressed bhav in him gets transformed into unexpressed bhav.

C. Stages in the journey from sagun to
nirgun, that is, from expressed to unexpressed bhav

4. Some factors essential for the creation of unexpressed bhav

seva
Service unto the Absolute Truth, that is, God Principle
Naivedya
Food offered to the Deity as a part of ritualistic worship
Jiva
Embodied soul
Dharma
Righteousness
Anand
Bliss