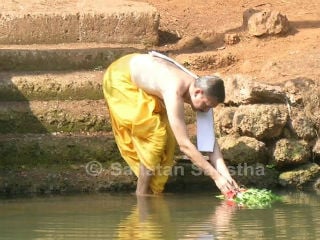 The superior-most Principles being emitted consistently by the Deity cannot be imbibed by an average worshipper; but they can be imbibed through the medium of the flower and then from the nirmalya easily.

This example highlights the fact that there is some underlying science for every action in Hindu Dharma. If the action of lifting the nirmalya is performed with all the fingers, it does not generate much bhav in the worshipper; however, if it is lifted with the thumb and the ring finger, bhav is generated instantly.

A flower not offered to a Deity does not attract Sattva-predominant Principles. Hence, when they are lifted with the thumb and the ring finger, we do not feel the vibrations. Depending on the purpose for which the flower is used, the flower attracts specific vibrations; for example, if the flower is used by women to adorn their hair, the quality in the woman will be attracted to the flower.

1. Why should nirmalya be
removed using the thumb and the ring finger ?

B. With the help of waves of the Akash-tattva (Absolute Ether Principle) emitted by the thumb, the waves of Chaitanya in the nirmalya are emitted into the atmosphere. This helps in destroying the Raja-Tama covering around the body of the individual.

2. Why should the individual smell the nirmalya after removing it ?

Since the nirmalya has been worn by the Deity on the body, it is charged with the Deity’s Chaitanya. In Sanskrut language, ‘nirmalya’ means the grime removed by the Deity from its body along with its nirgun (Non-materialised) Chaitanya. This grime is a Divine fragrance emanating from the body of the Deity. Since flowers are associated with the Pruthvi-tattva (Absolute Earth Principle) and Apa-tattva, the fragrant waves emanating from the flowers on the strength of the two Principles imbibe the Chaitanya in the form of Divine fragrance emanating from the Deity. Smelling the nirmalya helps spread this Chaitanya into the body of the individual and as a result, the panchapran (Five vital energies) located in the navel region of the individual are activated. It is because of the activity or the flow of the panchapran, that the Chaitanya generated in the puja spreads all over the body and the individual is able to imbibe sattvikta from the puja through the medium of the nirmalya. Hence, smelling the nirmalya is beneficial for the individual. Any object that is offered at the Divine feet of the Deity or worn by the Deity gets charged with the Deity’s Chaitanya; hence, an individual should take advantage of the Chaitanya from these objects.

3. Why should the nirmalya removed from the
Deity be kept to individual’s left side after smelling it ?

Chaitanya emitting from the nirmalya is largely associated with the tarak (Saviour) Principle of the Deity. When it is placed to the left side, the atmosphere on that side is enriched with Chaitanya and the chandra-naḍi of the individual is activated. Through the medium of chandra-naḍi, the individual is able to imbibe the Chaitanya of God’s tarak form from the atmosphere in a shorter period. (Normally, when substances associated with the Tej-tattva (Absolute Fire Principle) such as frankincense, lamp etc. are kept to the right, the individual’s surya-naḍi is activated.)