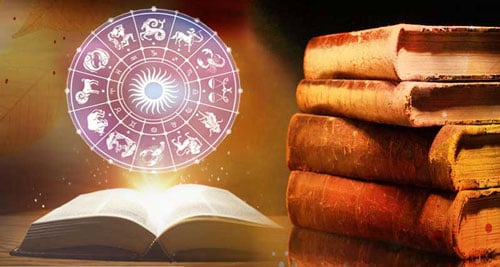 ‘ज्योतिषामयनं चक्षुः’ means astrology is part and parcel of the Vedas.

The word ‘jyotish’ is derived from two words ‘jyot’ meaning radiance and ‘ish’ meaning God, thus it is a science which is enriched with Divine radiance.

4. The science created by Deity Brahma

Meaning : Deity Brahma created the science of astrology in the ancient times for the welfare of the world in the form of knowledge with regard to the time period as without it श्रौतस्मार्त acts cannot be accomplished.

‘चतुर्लक्षं तु ज्यौतिषम्’ means this science is one with four lakh Holy verses. Majority of devotees make use of this science at some juncture in their lives and several have had spiritual experiences from it.

Meaning : Astrology is a great science and is a sacred part of the Vedas. It comprises of three skand (chapters), siddhant (set of rules), sanhita (text) and hora (Vedic system of time division).

‘Astrology not only predicts what is destined to happen but also gives remedies to overcome them, that is explains which action has to be performed willfully to overcome that destiny.’

Labelling astrology as fake amounts to calling the Vedas fake !

Astrology is one out of the six parts of the Vedas. The Rugveda has 36 Holy verses, the Yajurveda 44 and the Atharvaveda 162 Holy verses pertaining to astrology. This explains the deep seated connection of astrology with the Vedas. Hence labelling it as fake amounts to calling the Vedas fake. Also using law to ban astrology would amount to imposing a ban on the Vedas. Due to religious freedom given by democracy no law can be framed against Hindu Holy texts. So rejecting astrology is like rejecting the religious freedom that Hindus enjoy. Consequently opposing astrology is opposing the Hindu Dharma. (Compiled from collected matter)

Had it been fake would astrology have
survived ? – Vedic Scholar Yogesh Kaleguruji, Solapur

If an astrologer predicts an event in the future of the life of an individual and it comes true then why should that individual not believe in astrology ? Lakhs of people have experienced this. Those thinking of astrology as a farce should ponder on this as well. No one can be fooled each and every time. Millions of people consult astrologers so there must be some truth in it. Though several things have been destroyed with passage of time, astrology is still persisting for thousands of years, that alone is proof of the truth in it. (March 2007)

After 35 years of research I can emphatically say that astrology too is a Scripture, it is not a mere science which has limitations. I feel proud that every great scientist that I tried to convince about the subject has accepted it. I spoke to 12 Nobel prize winners and asked them how they were selected for the prize. They said that at that time they saw some vision or heard something which they experimented upon in a laboratory, that experiment succeeded and they won the Nobel prize.

Mention of science of astrology in the Constitution

Just because a few scientists oppose astrology it does not mean that in this scientific age astrology is a farce. This verdict has been given by the Supreme Court as well. Now even our Constitution refers to it as the ‘science of astrology’. Hence no one in any state of Bharat will be able to defame astrology as farcical.

A science of experiences which reduces the intensity of destiny

In a way astrology is performing the mission of administration of time. It assists man in future planning. Despite that an attempt is being made to defame and attack astrology continuously. Combating this there is a need to protect our ancient Scriptures and knowledge which has been passed down by authorities in the subject. Scriptures are the eternal truth. How deep is our knowledge on it ? How much can we study the expanse of these Scriptures ? Astrology is not mere mathematics; it is also a science of experiences. Astrologers advice religious rituals to reduce the intensity of unhappiness caused due to sins committed in previous births, in this birth, based on the horoscope. As a result its intensity is reduced to an extent which can be faced as destiny. (Compiled from collected matter)

Labelling astrology as a farce
without studying it is extremely unscientific

‘When modern sciences have not studied astrology and it is not their subject, why to drag scientists into it ? Let scientists claim that it is their subject. If they want to study astrology they are free to do so. Is vastushastra (science pertaining to premises) a part of architecture ? They should study it as a science and only then pass a judgement. Labelling astrology as a farce without studying it does not fit in the rules of science.’

A science displaying the planetary influence

Astrology is a pillar supporting Dharma (righteousness) and Spirituality. However today some so-called scholars of the Scriptures are labelling astrology as ‘blind faith’. A science is superior to both, knowledge and the modern sciences. According to the Vedas other sciences may be opposed but medicine, science of mantras and astrology are the three sciences which are worthy of being believed time and again. ‘यत् ब्रह्माण्डे तत् पिण्डे ।’ means whatever is in the universe is also in the embodied soul. Planetary influences affect not only man but all Nature, for example earthquakes occur, lunar changes affect tides in the sea. Universal energy gets activated as positive or negative through planets and has an impact on the human mind and brain. This energy itself serves as the cause for success or failure. This very planetary influence is depicted by astrology.

To decide the auspicious time there is no alternative to astrology

When performing any auspicious act every devotee uses astrology. If not used events such as starting a new home, entering a new home, installing Deities in the home, marriage ceremony, thread ceremony, naming ceremony and such other rites will occur at the wrong time (on inauspicious moments, out to ignorance). That if a rite is performed on an auspicious day at the appropriate moment or if performed at the opportune moment then the benefit derived is good, is a concept prevalent in Bharat since the Vedic period. Between auspicious and inauspicious days those following the Vedas have some hypothesis. In fact there is a mantra which states during the reign of which planet the rite of Kanyadan (giving away the bride to the groom) is auspicious. Which planet is auspicious and which part of the day is to be considered meritorious is also mentioned in the Vedas.’

Between 2004 and 2006 public interest litigations were filed in several High Courts and then in the Supreme Court in Bharat that astrology, vastushastra (science of premises), gemology etc should be declared as non-scientific, but all were dismissed by the Supreme Court. The Government of Bharat has accepted all these sciences and Scriptures as ancient sciences. This has been notified in an affidavit filed by the Government in response to a public interest petition filed in Bombay High Court against all these sciences. Thereafter this public interest litigation was also dismissed. (Compiled from collected matter)

If man is unable to prove a science due to
his ignorance then the science cannot be called faulty !

‘Astrology is like a lifeline in the mission of protecting Dharma because all events from birth to death fall in its purview. In the modern era materialism has reached its zenith and even world parameters are changing. It may take long for projection of the truth but people are not prepared to wait for proof of a science. Astrology is based on the momentum of planets and it symbolises action. Then how can science which considers an action as superior represent blind faith ? A person cannot see an object kept at a distance of a kilometre from him so can he say it is non-existent ? Man has very little knowledge because of which he cannot challenge the earnestness in this science. The ignorance of an individual cannot reduce the importance of any science from the Hindu Dharma.’

Vedas
The most sacred Hindu scriptures, revealed directly by God
Shraddha
Ritual performed on the death anniversary according to Hindu Almanac, to appease departed ancestors? subtle bodies
Dharma
Righteousness
mantra
A syllable or words representing spiritual reality or an aspect of God uttered to protect oneself or to achieve a specific goal