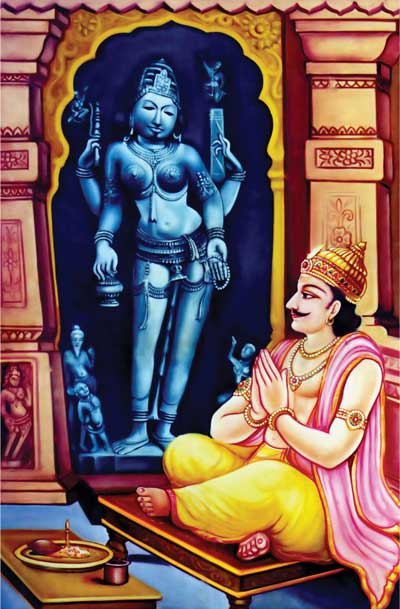 1. In 1034, King Bhoj established a Bhojshala at Dhar with the objective of worship of Shri Saraswatidevi, propagating the Hindu way of life and spreading awareness of Sanskrut language.

2. In 1305, Allauddin Khilji attacked the Malwa region and denigrated the Idol of Devi Saraswati in Bhojshala.

3. In 1514, Mehmoodshah Khilji encroached into the surroundings of Bhojshala and erected a tomb of Kamal Maulana there.

4. In the pre-independence era, the British Viceroy Lord Curzon stole the Idol of Deity Saraswati from Bhojshala and sent it to Britain. Even today it lies in a museum in London.

5. In the post-independence period of Bharat the centuries old history of attacks on the Bhojshala took a new turn. On 15.5.1997 the then Chief Minister Digvijay Singh of Congress Party gave orders to remove all Idols and pictures from Bhojshala and declared it a masjid. Hindus were thereafter permitted to enter it only once a year under strict restrictions, during the festival of Vasant Panchami.

6. On 18.2.2003, the day of Vasant Panchami, the Congress Government in power, imposed curfew without prior notice and lathi charged devotees who had gathered at Bhojshala for the ritualistic worship. Hundreds of Hindus including children and 40 women were arrested. False charges of murder or attempted murder were slapped on 1,234 Hindus.14 innocent volunteers were given punishment of life imprisonment.

7. Due to the extreme atrocities inflicted by Congress government on the Bhojshala liberation struggle, in 2003 the agitated Hindus elected Bharatiya Janata Party to power. But even after BJP came to power, nothing really changed with respect to liberation of the Bhojshala.

8. As in they year 2006, Vasant Panchami occurred on a Friday, Hindus sought permission from the State Government to allow performing puja only and to disallow namaz. The State Goverment with Shivraj Singh Chauhan as the Chief Minister rejected this request and committed atrocities on agitating Hindus, charging 164 Hindus with attempt to murder.

9. Once again in 2011 A.D. the Hindu hater nature of the State government was exposed. The State Government confiscated the new idol of Shri Saraswatidevi and kept it in the prison. After Hindus agitated the idol was reinstalled in the Bhojshala.

10. In 2012 once again just before Vasant Panchami, the State Government kept the idol of Shri Saraswatidevi in prison and banned celebration of the birth anniversary of Deity Saraswati.

11. In 2013 on the day of Vasant Panchami the State Government repeated its inhuman act of torturing Hindus gathered for the puja with lathi charge. Due to this Hindus were compelled to give a warning of a final agitation.

12. On Vasant Panchami celebrated on February 13, 2016, the appeal made by Hindus seeking permission to be allowed to perform puja of Deity Saraswati throughout the day was thrown into the waste basket. In order to allow 25 Muslims to perform namaz, thousands of Hindus were kept waiting outside the Bhojshala with puja material by the Madhya Pradesh Bharatiya Janata Party Government which was finally opposed by the Hindus. Hindus boycotted entry into the Bhojshala and performed fire sacrifices and puja outside it.