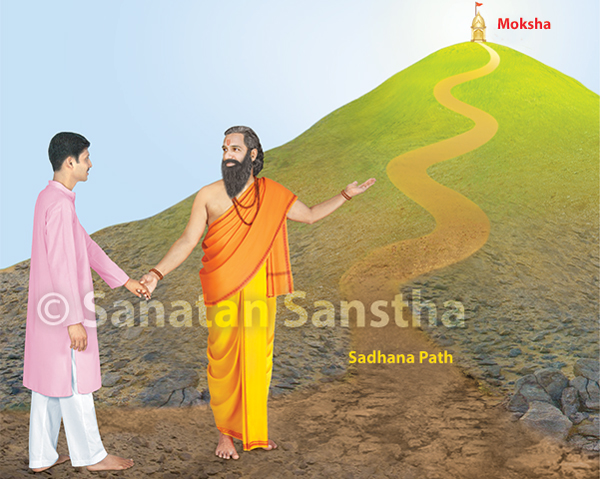 1 A. One experiencing self-realisation.

2. Qualities of Guru – The yearning
to impart spiritual knowledge to a disciple

The Guru earnestly wishes to generously impart to His disciple the spiritual knowledge He has obtained from His Guru and other Saints.

Shri Gurumaharaj used to have long conversations with His devotees. Even this would exhaust Him. Hence, sometimes His disciples would request Shri Gurumaharaj to speak less. Shri Gurumaharaj would then give answers with such intense yearning that it would stun the speaker. He would say that the disciples of Shri Ramkrushna Paramhansa would also tell Him not to speak excessively and that Ramkrushna would then respond, “If even one individual is emancipated by my talk, I will be happy no matter what the consequences with respect to my health are. It is really a punishment for me if I am prohibited from conversing with those who love me so much and travel great distances to meet me. If I do not speak to them, meet them, then how will I remain in good health ?”

3.Qualities of Guru –
Teaching only that disciple who will obey

In Gurucharitra (Adhyaya 47, Ovi 14) it is said that, ‘One who follows devotedly something told just once, only to such individual will I preach and he should perform it with the same devotion’.

4. Qualities of Guru – Teaching
step-by-step based on the spiritual level

4 A. Finally, a disciple has to surrender everything – body, mind and wealth to the Guru. Despite this being so, a seeker in the initial stage finds it difficult to even listen to such words. Hence, during the 1993 Gurupournima celebrations in Goa, Baba said, “Just as one eats to heart’s content and then does not bother about the leftovers in a plate, a seeker too should enjoy worldly pleasures to the maximum and sacrifice as much as the leftovers, but then not think about it anymore.”

This is meant only for a seeker in the primary stage. Someone misinterpreted it and thought that Baba advises only sacrificing that little and not surrender everything.

5.Qualities of Guru – Examining the homework

If spiritual practice is not taking place appropriately, then just as a good teacher asks his students to do homework, corrects it, takes tests, etc., a Guru should be able to ask His disciples about it. Hence, some Gurus ask their disciples to write down God’s Name and check it regularly; while some Gurus tell seekers to speak about their thoughts and spiritual experiences with them.

6.Qualities of Guru – Teaching with a positive attitude

His Holiness Baba teaches with a positive attitude. He says, “Sing devotional songs, chant God’s Name, perform service etc.” He never preaches negative things such as ‘Do not drink alcohol, do not behave in this way etc.’

7. Qualities of Guru – Equality for all disciples

It is natural for a Guru’s love for a disciple to vary according to the disciple’s bhav (Spiritual emotion) towards Him. This is akin to parent’s variable affection for their children. However, just as good parents do not display it, so is the case with the Guru.

Though the clouds shower rains equally everywhere, the water accumulates only in craters, while the raised mountains remain dry. Similarly, Saints do not discriminate. The bestowal of their grace on all is the same; however, the one with a pure antahkaran who humbly surrenders to them gets deserving benefit in keeping with his faith.

8. Qualities of Guru – Protecting the disciple

If a disciple is desirous of Moksha (Final Liberation), then even if he commits mistakes, the Guru protects him. No matter how impulsive, stubborn, illiterate or incompetent the disciple may be, the real skill of the Guru lies in His taking care of that disciple. Even if a disciple is terribly annoyed with the Guru, the Guru Himself takes care of him. Once, a disciple of His Holiness Baba placed a pair of slippers on His photograph. Despite this, Baba did not get angry with him; instead, He continued to love him as before.

9.Qualities of Guru – Appreciating the disciple

A Guru expresses appreciation for His disciple off and on either in words or by bestowing him with spiritual experiences.

10. Qualities of Guru – The one without
any expectationof receiving Gurudakshina (An offering)

Ashram
A place where a seeker can remain engrossed in spiritual practice through spiritual discipline
Gurucharitra
Composition on the life of Shripad Shrivallabh and Nrusinh Saraswati, the Incarnations of Datta - the Guru of all Gurus)