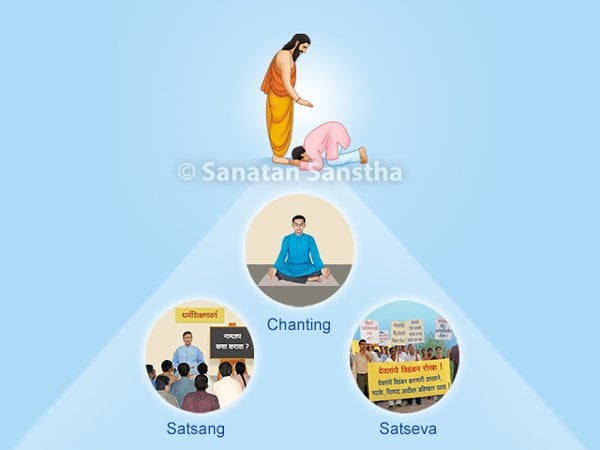 In order to be blessed by a Guru, it is necessary to follow few steps for the constant bestowal of His grace, as only by the grace of the Guru can the disciple attain his ultimate benefaction which is spiritual progress. Let us study this article that lists various criteria which we can follow in order to be worthy of a Guru in our lives.

The sequence of following eight-fold spiritual practice depends entirely on the quality of the seeker.

Stage 1 – Seeker who has many personality defects and ego : Such a seeker should make efforts in eight-fold spiritual practice as per the following sequence.

7. Sacrifice for sat (Absolute Truth) and

Stage 2 – Seeker who has devotion : A seeker who is devotion-predominant by nature should make efforts in eight-fold spiritual practice as per the following sequence.

2. Efforts to awaken devotion of the subsequent stage,

7. Sacrifice for sat and

This is spiritual practice to bring about spiritual progress of the entire society. We exist in a period which is unfavourable for vyashti sadhana, with Raja-Tama pollution, deterioration of Dharma, anarchy etc. as contributory factors. In this period, God-realisation only through vyashti sadhana is extremely difficult and has to be supplemented with Samashti sadhana.

2A. Efforts to overcome personality defects

2B. Efforts to destroy ego

A person with even a fraction of ego cannot realise God. Hence, while performing spiritual practice we have to make wilful efforts to dissolve the ego. Acts like praying, expressing gratitude, physical
seva etc. help in reducing the ego.

Chanting refers to the continuous remembrance of The Deity’s Name. Of all the Names of The Deity, chanting the Name of the kuladevata (family deity) is the most useful. In fact it is the foundation of all the spiritual practice incorporated in the Gurukrupayoga (Path of Guru’s Grace). As one does chanting gradually one’s spiritual level reaches 40%. Then chanting occurs automatically off and on and one is also able to perceive a little in the subtle dimension. Also due to chanting one forgets about other things and begins to experience Bliss off and on.

The Bliss obtained through chanting of The Deity’s Name is experienced automatically despite not chanting, at a satsang (spiritual meeting). Such an experience is obtained at a spiritual level of 50%. Due to the cumulative Sattva component of all the seekers at the satsang, each one who attends it is benefitted by it, that is the raja and tama attitudes in each one gradually begin to decrease. It is much easier to obtain the experience of Bliss by attending a satsang rather than increasing one’s own sattva component by chanting. Hence a seeker diligently attends satsangs more often. If a satsang is conducted by an evolved seeker then attending it proves to be even more beneficial. Since the sattva component of an evolved person is substantial, the amount of frequencies of Bliss emanating from him is greater and as a result a seeker experiences more Bliss. The importance of satsang will be illustrated by the story below. Once an argument took place between the Sages Vasishtha and Vishvamitra on the relative superiority of satsang and penance. Sage Vasishtha proclaimed satsang to be superior whereas Vishvamitra was in favour of penance. To decide the winner of the debate, They went to God. The Deity said, “Only the serpent Shesh will be able to settle the dispute”. Then the duo went to the serpent Shesh. When They asked Shesh the question, He replied, “Please lighten the load of the earth on My head. Then I will think it over and answer your query”. So, Vishvamitra made the following resolve, ‘I offer the benefit acquired as a result of a thousand years of my penance. May the earth above Shesh’s head shift a little’. Yet, the earth did not stir. Then Sage Vasishtha expressed His resolve, ‘I now offer the benefit gained as a result of being in satsang (holy company) for half a ghatka (twelve minutes). May the earth lighten the load.’ The earth immediately moved upwards. Another benefit of remaining in satsang is that one develops the feeling that the other seekers attending it are one’s own. Hence, even the younger generation starts living amicably forgetting the animosity present for generations together. From this very feeling the concept that ‘the entire universe is my home’ develops in due course of time.

After attending satsang for a while a seeker realizes that the ones who are active participants at or those who conduct a satsang (spiritual meeting), so also if the satsang is being conducted by an evolved seeker, then they all experience much more Bliss than himself. So, the seeker who wishes to experience Bliss like them instead of merely being a passive listener starts participating in the activities at the satsang. Thus he participates in organizing the satsang, for instance by distributing pamphlets giving information about the satsang, by pasting posters and putting up banners, giving information by personally contacting people, by tidying the venue of the satsang, spreading out mats or arranging chairs for the audience, etc. At a later stage he studies the matter himself and conducts satsangs. One should take special note of the following points with regard to service of the Absolute Truth.

2F. Sacrifice unto the Absolute Truth

Once the spiritual level of 60% is attained, sacrifice in the real sense commences. We need to sacrifice our body, mind and wealth in order to progress spiritually. Of these, sacrifice of wealth is the easiest from the perspective of
physics as we can give away all the wealth.

However, the body and mind cannot be given away easily. Even then, these can be sacrificed before giving up the wealth. This can be achieved by rendering service physically and chanting God’s Name mentally. Only when a
seeker progresses to 70% spiritual level can he actually sacrifice wealth to some extent. This is like a trapeze artist in a circus. So long as one artist does not let go of the swing he is holding onto, the artist swinging on the other side cannot hold him. Similarly, so long as a seeker does not sacrifice everything, God does not take care of him.

2G. Priti (Spiritual love) for others

One feels spiritual love for others only after attaining a spiritual level of 70%. Spiritual love means love without any expectations. In worldly love, there are expectations. By practicing spirituality the percentage of the sattva component in oneself increases and one tends to satisfy the visible and invisible creation in one’s surroundings. There is an expansion of love and one develops spiritual love towards others. One is able to perceive the presence of The Supreme God in each and every object and the whole world becomes one loving family. In order to achieve this, in the beginning, one has to make efforts to love others. For this, it is important to remain in satsang.. At first, one begins to feel spiritual love for other seekers attending the satsang then for seekers from other sects, still later for non-seekers and finally for all living creatures.

Intense attraction for God is ‘bhav for God’. The earlier the development of this bhav and the longer it remains awakened the faster can we reach God. Consistent attempts to increase bhav at the level of the mind and intellect definitely help. Actions like praying, expressing gratitude, Arati, obeisance etc. help in enhancing bhav.

3A. Best satseva : The spread of Spirituality

Doing whatever one can according to one’s potential for the Guru’s mission is the simplest and the most important path. This point will be highlighted with the following example; Suppose preparations are going on for a programme and everybody is busy doing different chores like cleaning or decorating the place, cooking or cleaning utensils. If one is busy in cleaning the place and at this juncture if another person steps in and joins the group busy with the cooking then one does not feel any closeness towards him. On the contrary if he comes forward to assist in the cleaning then one definitely feels drawn to him. The same is true for the Guru. The mission of Gurus and saints is to inculcate a liking for Dharma (Righteousness) and spiritual practice among the masses; to inspire them to practice Spirituality and to spread Spirituality. If one performs this task according to one’s potential then the Guru feels, ‘He is mine’. Such a thought in the Guru’s mind itself is the heralding of gurukrupa (His grace).

3A2. The spread of Spirituality is more important than the samadhi (superconscious state)

The Guru is pleased to see that the disciple has attained the superconscious state. He wishes to awaken him for the sake of the masses. He fondles him gently, embraces him lovingly, O dearest disciple return to the waking state. –
You have crossed the illusion of worldly life but if you remain in the superconscious state, The spiritual knowledge will remain obscured in you, Then how will the masses attain salvation? – 52:7 -Shri Gurucharitra

The following table gives the amount of (gurukrupa) that a disciple can acquire by performing a particular action.

* To spread Spirituality effectively one needs to have all the virtues of a disciple. It is not sufficient to preach like a politician or a social reformer.

Tama
One of the three components in the Universe denoting inertia and ignorance
seva
Service unto the Absolute Truth, that is, God Principle
Satyayug
The first in the cycle of four eras since the origin of the Universe
Satsang
Company of the God Principle
Samashti sadhana
Spiritual practice for the spread of Spirituality
Kaliyug
Era of strife (The present era, amongst the four eras)
Gurukrupayoga
Path of Guru's grace, which incorporates eight steps
Dharma
Righteousness
Ashram
A place where a seeker can remain engrossed in spiritual practice through spiritual discipline
Gurucharitra
Composition on the life of Shripad Shrivallabh and Nrusinh Saraswati, the Incarnations of Datta - the Guru of all Gurus)
Sattva
One of the three components in the universe, signified by purity and knowledge