Every seeker in the primary stage has read that, in Spirituality, the ultimate means of salvation is a Guru, whereas a seeker in the advanced stage actually experiences it. Most seekers are unaware of what they should do to acquire a Guru. As a result, not only the present, but several future births are wasted. To be accepted as a disciple by a Guru, one needs to gain the grace of a Saint. However, for bestowal of the Guru’s continuous grace, one has to constantly earn His blessings. An easy solution to this is to do what Saints and Gurus expect, that is, practice of Spirituality. This article provides practical information on spiritual disciplines and how a disciple should behave in the society and have an ideal lifestyle. 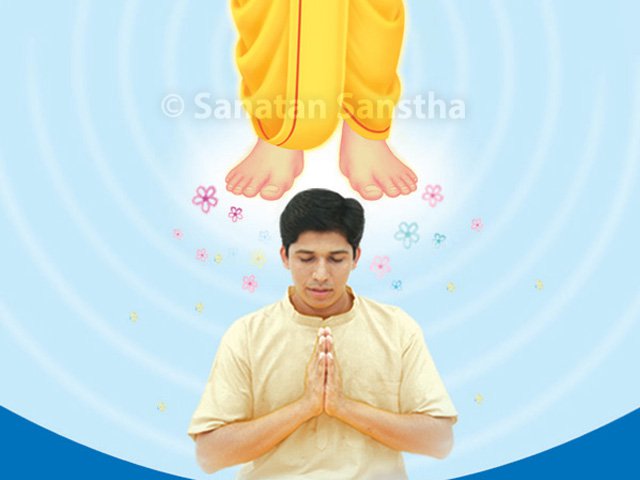 In society, a disciple should be well behaved. Otherwise people will criticize the Guru saying, ‘Is this the way the Guru has taught him to behave ?’ Every physical, verbal and psychological action of the disciple should be approved of by the Guru. For instance, he should avoid criticizing others, behaving immorally, etc.

2. One should take treatment during an illness

If one is not supposed to take medicines in an illness, then the Ayurveda referred to as the fifth Veda would never have been written. Besides, it is said that the physical body is the medium for practicing Spirituality. One cannot avoid taking medical treatment with inconsideration that he is completing his destiny by undergoing it, since one does not know whether the illness is due to destiny or wilful action.

A disciple eats with the belief that he is eating the leftovers of the Guru, hence he does not offer chitrahuti.

Question : Why does one eat the Guru’s leftovers ?

Answer : The Guru constantly chants God’s Name. One eats His leftovers so that one may be able to chant similarly. If one’s motive is otherwise, then one should not eat it.

The only real relationship is that of the jiva (Embodied soul) and Shiv (The Supreme God), that is the disciple and the Guru. All other relationships from the Great Illusion such as those of parents, spouses, children, etc. are untrue.

5. The name given by the
parents and that imparted by the Guru

A. The name given by the parents pertains to the physical body, that is Prakruti whereas that given by the Guru (The God’s Name) is in accordance with the God principle.

B. Impressions made on oneself make one feel that the name given by one’s parents is one’s own. Similarly, one should make oneself feel that The God’s Name imparted by the Guru is one’s own, through impressions of the Name (by chanting). The Name given by the Guru indicates that one belongs to someone (the Guru principle). Later, forgetting the name imparted by one’s parents, one should feel The God’s Name to be one’s own.

C. The son carries forth the name of his parents, while a disciple carries forward the one given by his Guru.

6. How should one live in the Ashram and follow ?

A. One should not live in the Ashram as if living in a dharmashala (Traveller’s inn).

B. One should not take away the Guru’s belongings such as slippers, blankets, etc. from the Ashram, as the Guru’s Prasad (Holy sacrament) without anyone’s knowledge!

C. One should live in the Ashram without being a burden to anyone there. One should see to it that other inmates of the Ashram are neither overburdened with work nor undergo mental tension by one’s presence. One should also not be a financial strain on the Ashram. Arrangements for bedding should be made by oneself.

D. In all aspects – physical, psychological and financial, one’s stay in the Ashram should prove useful to the Ashram. One should do any sort of work allotted in the Ashram as part of service to the Guru.

E. One should meticulously follow the rules and regulations of the Ashram.

F. The importance of living in an Ashram : Living in the Ashram is very important to reduce the attachment to one’s home, to eliminate dehabuddhi (Body-awareness), to consider others as a part of one’s own family and to reduce one’s ego.

7. Behaviour with other Gurus and Saints

A. One should certainly be loyal to one’s Guru, but one should not harbour duality about other Gurus. The feeling that ‘My Guru is superior to others’ is an indication of ignorance.

C. Two individuals differ in their basic temperaments, but share a common principle.

The implied meaning : The temperament of every individual differs according to the variation in the three components – Sattva, Raja and Tama in him. However, the principle which is common to all individuals is the soul or Brahman principle.