Every seeker in the primary stage has read that in Spirituality, the ultimate means of salvation is a Guru, whereas a seeker in the advanced stage actually experiences it. Most seekers are unaware of what they should do to acquire a Guru. As a result, not only the present, but several future births are wasted. To be accepted as a disciple by a Guru, one needs to gain the grace of a Saint. However, for bestowal of the Guru’s continuous grace, one has to constantly earn His blessings. An easy solution to this is to do what Saints and Gurus expect and that is, practice of Spirituality, alone. This article provides practical information on Guru Shishya relationship and how a disciple should behave with the Guru. 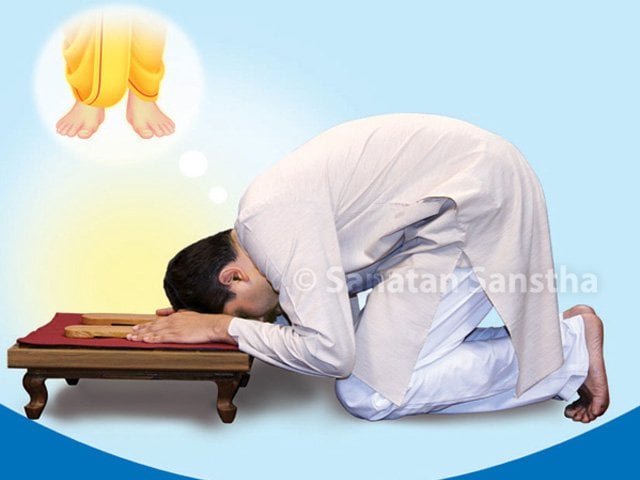 1. How should one approach the Guru ?

Placing the head on someone’s feet denotes the surrender of the intellect. Whether one meets the Guru at one’s home, in His Ashram, on the road or elsewhere one should place one’s head on His feet. At that time, a saint often touches one’s back or head. This bestows an even greater benefit. When one places one’s head on the feet of a saint, Energy or Bliss frequencies enter one’s body through the Brahmarandhra in greater quantities.

Instead of offering sweets, garlands, coconuts, etc. it is better to offer some favourite dish of His made at home or money, etc. This is because, the Guru distributes the sweets, garlands, coconuts, etc., but the money is useful for His mission. However, the most valuable thing that one can offer to the Guru is bhav (Spiritual emotion) which is the most important in Guru Shishya relationship.

A. One should chant The God’s Name continuously so as to purify oneself in order to be able to serve the Guru.

B. Chanting occurs easily and automatically in the Guru’s presence and when doing His service. One should take advantage of this phenomenon.

5. The Name imparted by the Guru is
more important than the Guru’s speech

While paying attention to chanting the Name, one need not pay attention to anything else; because all these things are from the gross dimension; whereas the Name is associated with the God principle.

6. What should one do when
the Guru reprimands, abuses or beats ?

Question : When accompanying the Guru, if the disciple walks ahead of the Guru, He shouts, “How dare you walk ahead of Me ?” If he remains behind, the Guru yells, “Why are you lagging behind when you are My disciple ?” and if one walks alongside Him, He rebukes, “Are you trying to compete with Me ?” Then how should the disciple behave? And what is the Guru’s intention behind it ?

His Holiness Bhaktaraj Maharaj (Baba) : In fact not much importance should be attached to the Guru’s rebuke, as the Guru’s motive is to teach the disciple to continue chanting God’s Name; so one should not feel aggrieved by the Guru’s rebuking.

In short, instead of analysing the reason why saints or the Guru reprimand, one should continue chanting God’s Name and perform Their service, because eventually, comprehending the real reason is beyond one’s intellect.

7. One should not force the Guru to eat

One should not force Guru to eat due to the following reasons.

8. One should keep only one thought in mind,that
‘the Guru should not experience any discomfort’

Once a lady disciple of Baba (His Holiness Bhaktaraj Maharaj) came to stay with Him for Diwali. Her intention was not to celebrate Diwali joyously with Baba, instead her attention was fixed on whether Baba was following dietary restrictions like not eating oily foods. Another lady disciple of His wept after Baba scolded her because she felt upset that it must have caused Him trouble to yell at her. Once at Indore at the construction site of the Ashram, Baba standing on broken bricks was beating up a disciple. The disciple however instead of paying attention to the beating was worried lest Baba lost His balance and fell injuring Himself.

9. Inviting the Guru to one’s home

Guru feels like visiting only those who visit Him despite of all obstacles. Besides when one says “come over to our place” the emotion that “this house is mine” is in the mind. The Guru does not like that. One should harbour the bhav that “this is the Guru’s home. He will come whenever He wishes.”, and that ‘I am living in the Guru’s house’. If one maintains this bhav, then the Guru Himself visits one without an invitation and even moves freely in and around the house.

10. One should not make the Guru an invalid

Bringing the car to the doorstep, keeping a toothbrush and water for brushing teeth by the bedside, fetching water to wash hands after a meal, lifting His luggage, etc. make the Guru become physically inactive and weak. The disciple should see that the Guru gets at least some exercise. Thus, He remains healthy and there are less chances of His falling ill. Though the Guru is unaffected by His illness, if He remains in good health it proves beneficial to the disciple itself.

11. The behaviour of a disciple staying at
tirthakshetra (Place of pilgrimage) along with the Guru

Never embark on a pilgrimage to a holy place like Kashi or visit a temple without serving the Guru. – 2:203.

Do not go on a pilgrimage, to a temple, care for the physical body or pay a visit to someone. Serve none other than the Guru as The Supreme Brahman, incessantly. – 2:204. – Shri Gurucharitra

The real tirthakshetra from the disciple’s viewpoint

When an average person who has incidentally realised the importance of fulfilment of human life acquires the satsang of a devotee of The God and thus undertakes spiritual practice he progresses from the gross dimension to the subtle study of Spirituality and acquires pure spiritual intellect. At such a moment he develops an intense yearning for Liberation and realizing that without the acquisition of a Sadguru there is no salvation, he sacrifices everything and goes in search of the Guru. During this process there comes a moment when the seeker gets very exhausted in his search and The God fearing that he will die if he does not meet the Guru assumes the form of his Sadguru and appears before him. On seeing the much desired Guru he feels gratified, that is he achieves quiescence. Feeling gratified is the very nature of the mind. His embodied soul disappears and his life gets transformed. Such a disciple himself becomes a holy place.

12. One should not advise the Guru

A disciple should listen to the Guru and not advise Him to do anything. If one expects the Guru to listen to oneself, then it is as if one feels one is superior to Him. One should not tell the Guru anything regarding his food, medicines, rest, etc.

If there is some function like a wedding, etc. in the Guru’s home, one should consider it to be one’s own.

14. The Guru’s illness and renunciation of His body

A. Treatment during the Guru’s illness

If a Guru is in a coma during an illness, one should give Him the treatment prescribed by doctors. However, if He is conscious and refuses to take treatment or refuses to follow the dietary restrictions, one should listen to Him (the Guru).

B. The inability of the disciple to do anything

Once when Baba suffered a heart attack, disciples of His who were doctors made three attempts to record His electrocardiogram (E.C.G.), against His (Baba’s) wishes. The machine failed all the three times. Thus, Baba taught that none of His disciples could do anything against His wishes.

C. Going to pay obeisance to the Guru when He is ill

When the Guru falls ill, going to pay respects to Him in the Ashram or waiting outside the hospital, are both meaningless.

D. The Guru’s renunciation of His body

After getting the news that the Guru has renounced His body, the disciple should leave aside all his chores and as an expression of his gratitude should go to pay his last respects to the Guru. This is akin to a son who goes for the last rites of his father.

15. One should not sit on the Guru’s seat

Baba used to occasionally sit on a swing when He stayed at Kandli. Few years ago when His Holiness Dr. Jayant Aṭhavale (Baba’s disciple) visited Kandli, He felt like sitting on the swing. Two to three minutes after doing so, He felt nausea. The next time, no sooner did He sit on the swing (without swinging it) than He developed heaviness in the head and slipped into meditation. Then He asked seven to eight seekers attending His spiritual workshops to “describe their experience after sitting on the swing”. Each one experienced some sort of distress. From that spiritual experience, all were convinced, that if a swing that the Guru uses so rarely can have so much energy that a seeker with the ability to perceive sensations of the subtle dimension is unable to tolerate, then how great the one who can ascend the seat which is constantly used by the Guru will have to be!

16. Behaviour with the Guru after
the disciple has attained Absoluteness

It is benevolent rather than malevolent for a disciple to ritualistically worship His Guru after he (the disciple) has attained Absoluteness, because this itself is a feature of Absoluteness. The Guru and disciple are merged into the state of Shivdasha. So, there is no question of worshipping the Guru. On the other hand, when the disciple is in the state of the embodied soul the spiritual emotion is that of a disciple; so he worships the Guru.

Satsang
Company of the God Principle
Brahmarandhra
Opening in the spiritual energy system, located in the crown of the head
Ashram
A place where a seeker can remain engrossed in spiritual practice through spiritual discipline
Gurucharitra
Composition on the life of Shripad Shrivallabh and Nrusinh Saraswati, the Incarnations of Datta - the Guru of all Gurus)