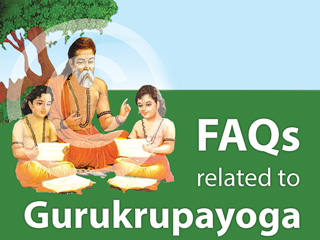 1. What is the mechanism
of action of Guru’s grace (Gurukrupa)?

The success of any activity depends upon the functioning of the various components constituting that activity. Just as the hydrogen bomb is more powerful than the atom bomb, so also is the subtle in comparison to the gross. This point will be illustrated by the example of the various methods employed to destroy the enemy, given below. The more progressive the step, the more effective it is:

Perceiving the whereabouts of the enemy with the five senses, for instance sensing the enemy or his movements, one can shoot with a gun. However, if he hides behind a structure, motionless then the gunman will not be able to shoot him and therefore cannot kill him. Here, only a physical weapon is employed to kill. Different substances are used for different functions, for example different tablets are used as medicine for different disease causing germs, etc. Therefore if mere physical means do not help then they should be combined with subtle means as described below.

1 B. A combination of physical means and a mantra [subtle]

In the ancient times, arrows were shot from a bow only after chanting a mantra. Due to the mantra, the name of the enemy would get recorded on the arrow and no matter where the enemy hid in the trilokas [Three regions- that is the earth (bhu), nether region (bhuv) and heaven (swarga)] the arrow would certainly kill him. This was due to the energy of the subtle means (mantra) which accompanied the weapon (arrow). The motive behind chanting mantras while preparing medicines in the ayurveda is the same. Similarly when removing a spirit responsible for possession blackgram (urid), marking nut (bibba), lime, needles, etc. are used to the accompaniment of mantras. Nevertheless, at times inspite of both the physical and subtle being present, one does not achieve much success. At such times a more subtle means, that is more powerful mantras should be used as given below.

In the next step an enemy can be vanquished without using physical weapons like guns, bows and arrows, etc. In order to achieve certain things, for instance marriage, riches, etc. various mantras are prescribed. At times, however, even mantras do not yield results. In such cases the next step has to be implemented.

Even a mere thought like ‘May it occur’ in the mind of an evolved person (saint) is sufficient for the occurrence of an event. Nothing else is required. However, this is possible only in the case of a saint whose spiritual level exceeds 80%. Only when a Guru makes a resolve ‘May this disciple progress spiritually’ does the disciple make real spiritual progress. This itself is termed as Gurukrupa (the Guru’s grace). A disciple cannot make spiritual progress without it as otherwise the adi (one with a beginning) illusion persists.

1 E. The presence (astitva) [most subtle]

In this final step one does not even have to make a resolve. Mere presence, proximity or company of the Guru is sufficient for a disciple’s spiritual practice and progress to occur automatically. A beautiful example to illustrate this is the sun which awakens everyone and makes the flowers bloom, when it rises. This happens simply with its existence. The sun does not ask anyone to wake up or the flowers to bloom. The mission of a Guru of a spiritual level of more than 90% is of this nature. The Guru’s grace operates based on points sankalpa (The resolve) and His presence.

2. What should one do for
Guruprapti (being blessed with a Guru) and His grace?

The only virtue responsible for being blessed by a Guru quickly and the constant bestowal of His grace thereafter, is mumukshutva (Desire for God-realization) or intense yearning for a Guru. A youth strives to win a girl’s heart by constantly contemplating on what he should do to please her. Similarly, one should make all efforts to acquire the Guru’s grace so that the Guru calls one His own. One should constantly strive day and night to do whatever one can to please Him. In the Kaliyug (Era of strife, being blessed by a Guru or His grace is not as difficult as it was in the previous three yugs (eras). A salient point to be noted here is that one cannot be blessed by a Guru without bestowal of His grace. A Guru is already aware of who His future disciple will be.

3. What is the difference between a saint and a Guru ?

Every Guru is a saint, but the reverse is not always true. Inspite of this being so, majority of the characteristics of saints also apply to Gurus. The following table grossly compares a saint and a Guru both with a spiritual level of 80 %.

Both saints and Gurus have a spiritual level of atleast 70%. After crossing 70%, spiritual progress is faster in Gurus than in other saints. They attain the level of a Sadguru (80%) and a Paratpar Guru (90%) faster than other saints attaining the same spiritual levels. This is because they are constantly engrossed in the mission of spiritually uplifting a disciple, while saints at times perform tasks from the

Great Illusion, for the sake of their devotees.

4. What are the similarities
and differences between God and the Guru

The following table clearly shows the externally visible differences in God and a Guru.

4 C. The disciple follows the advice of the Guru; hence he acquires spiritual knowledge of the unmanifest. God complies with what the devotee tells him, that is, He attains the manifest form and appears before the devotee.

4 D. The Guru’s prayer to The Lord when the Guru is in jivadasha (State of the embodied soul ) Lord grant Me a disciple who has the knowledge of Brahman, One who is supreme in spiritual emotion, an icon of devotion and love. Detachment will occur in the one who has these qualities. If I find such a disciple, I will be the happiest person. I will shield the dear one from evil eyes. Lord with Your grace grant Me a disciple Who will carry on My work (of spread of Spirituality) May he become Omniscient in the knowledge of Brahman and be upheld in glory in all the three worlds. Tuka is calling out to You, My Lord Vithoba. He is knocking at Your door.

Kaliyug
Era of strife (The present era, amongst the four eras)
Gurukrupayoga
Path of Guru's grace, which incorporates eight steps
mantra
A syllable or words representing spiritual reality or an aspect of God uttered to protect oneself or to achieve a specific goal