The full moon day in the bright fortnight of the month of Vaishakh Shak 1258 i.e. 28 th April 1336 was the day when Vijayanagar Empire was founded. The two brothers Harihar and Bukka laid the foundation of the empire under the guidance of Vidyaranyaswami. They had selected this place after a careful thought. This place was acceptable to Vidyaranyaswami and Harihar named this place as ‘Vidyanagar’ as a note of respect for his Guru. Later Bukka fought and defeated the Muslim invaders and ‘Vidyanagar’ was then renamed as ‘Vijayanagar’. 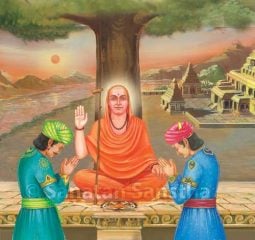 1A. Vidyaranyaswami was a disciple of Shankaracharya
Vidyateerth Swami of Shringeri Peeth!

Let us know more about Vidyaranyaswami. The atrocities of Muslim invaders at those times were at such a peak that the Hindu culture, independence and Dharma was almost on the verge of extinction. It was in these times that Vidyaranyaswami came to rise. Shankaracharya had established four Peeths in the four directions for reinstating Dharma. ‘Inflicting injustice, atrocities in the name of religion or forcing people belonging to other religion to convert into one’s religion’ was completely new to southern part of India. Yadav, Hoysala, Pandya and Kaktiya Hindu kings were falling easy prey to the attack of Muslim invaders. It was then that the Hindu Dharma Gurus realized that the Dharma cannot be protected without the backing of radiance of a warrior. At that time Vidyateertha Swami was Shankaracharya of Shringeri Peeth. Vidyaranyaswami was His disciple. Vidyaranyaswami brought in a blend of radiance of a brahman and radiance of a warrior and established the kingdom of Vijayanagar.

1B. Vidyaranyaswami’s acts were more risky than Arya Chanakya

Vidyaranyaswami’s deeds were indeed historic. One cannot imagine what would have happened if He was not there. In Indian history only two Dharma Gurus have directly participated in establishment of a kingdom, first one being Arya Chanakya and second Vidyaranyaswami. Even between them, Vidyaranyaswami’s deeds were more risky than Arya Chanakya! Arya Chanakya demolished the atrocious Nanda dynasty and instated Chandragupta Mourya as the Emperor. One Hindu king was displaced by another Hindu king. Vidyaranyaswami however, established a completely new kingdom. Due to Muslim invasion, entire country had fallen prey to Islam. Hindu kings were surrendering to the Muslim invaders and the sultans were creating havoc. Atrocities were committed against the civilians. Hindu temples were being destroyed. Situations were such worse that Hindu Dharma and culture itself were on the verge of getting eliminated. Vidyaranyaswami rose to save Hindu Dharma in such conditions. Arya Chanakya instated Chandragupta as a king, however He never participated in the ruling. Vidyaranyaswami however, became a minister in the kingdom.

He shouldered the responsibility of administration and conducted it aptly. Arya Chanakya’s book ‘Koutilya Economics’ is quite famous. Books authored by Vidyaranyaswami, ‘Critics on Parshuram’s code of conduct’ and ‘Discretion on liberation’ are also famous. Deeds performed by Arya Chanakya are well-known, however in spite of Vidyaranyaswami’s accomplishments being superior, He is still unknown to many. This is our ill-fate. Probably because Vijaynagar Empire has been lost in the history, so is Vidyaranyaswami.

2. Vidyashankar Swami (Vidyateertha Swami) seated on Shringeri
Gurupeeth was an expert in Brahmavidya(knowledge of the mantra/absolute)

The Gurupeeth of Shringeri was commanded by a great ascetic named Vidyashankar. Vidyaranya was His disciple. Vidyashankar’s father originally prevailed from Bilvaranya. At the time when
Shringeri Peeth’s influence over the society was diminishing, Vidyashankar took efforts to reinstate its radiance and prowess. In His efforts to rejuvenate its radiance, Madhavacharya (Vidyaranya), Harihar and Bukka assisted Him. Vidyashankar presided over the Peeth for 73 years. Within this period He groomed 8 disciple ascetics. These 8 disciples were highly capable and they established Peeths all over the country and resided there. Vidyashankar spent last 15 years of His life in Himalayas performing penances. He had a liking for Lambika Yoga and He was expert in Brahmavidya. Vidyaranya was His favourite disciple. Vidyaranyaswami and Madhavacharya are the names of the same person.

Vidyaranyaswami was born on 1296 AD. His name by birth was Madhav, His mother’s name was Shrimati and father’s name was Mayan. His brothers names were Sayan and Bhognath and they all were from Bharadwaj lineage and were Yajushastriya. Madhav was renamed as Vidyaranya by Shankaracharya and made the chief of Virupaksha Mutt. In the year 1331, He became an ascetic. He died in the year 1381. As mentioned by Dr. P. G. Sahasrabuddhe, a great thinker, ‘The Muslim invasion had not only made Hindus lose their independence, even the Hindu Dharma and culture
were at stake. In such adverse times Vidyaranyaswami rose to the situation. He revived spiritual and political science. He put an end to the dangerous custom banning reconversion to Hindu Dharma. He kindled pride towards Dharma and through the medium of Shringeri Peeth, He wiped out feeling of cessation of participation in worldly affairs and political disinterest from the minds of the subjects. He could do it and gather all the courage required to do so because He had a firm belief that it is essential to take decisions regarding Dharma based on the state of the country and prevailing time.

In those days, preaching of Vedas were considered as supreme and Hindus had a mind-set of following them blindly without questioning them. Therefore Hindu society had become blind-folded
and strict on following customs. They had lost the ability to scrutinize if their acts were appropriate or not. Such lethargic and distraught society was an easy prey to Muslim invasion. Madhavacharya, in His critics of Vedas has proclaimed to use intellect and has given importance to taking decisions for well-being of Dharma post proper thought process.

3A. Vidyaranyaswami, a great politician
heading the responsibility of Vijaynagar Empire

Hoysala, Ballal, Harihar and Bukka had close relation with Gurupeeth of Shringeri. They used to donate huge sums annually to the Mutt. The royal men of Vijaynagar used to seek blessings of heads of the Mutt and used to yearn for their guidance. Vidyaranyaswami was not just a Dharma Guru, He was also a great politician shouldering the responsibility of Vijaynagar Empire. He was a Chancellor of the Empire and advisor to Harihar and Bukka.

5. Vidyaranyaswami brought Harihar and Bukka back into
Hindu Dharma and saved South India from becoming Islamic

Harihar and Bukka were the two out of five sons of Sangam. Kampanna, Muddappa, Marappa were the names of other three sons. Sangam and his sons were at the important post in the service of one of Kakatiya, Hoysala and Kampili kings of Varangal or at times at service of two or three them based on changing circumstances. While the Hindu kingdoms in South India were collapsing, Harihar and Bukka were captured and taken to Delhi by the Sultan and were converted to Islam. They returned to the South along with the Muslim army. They both met Vidyaranyaswami at some place. Where the meeting happened and how was the plan for establishing a kingdom laid out is unknown in the history. Although they were converted to Islam, Harihar and Bukka had no affiliation towards that religion. They still had devotion towards Hindu Dharma deep within their minds. Fortunately they both met Vidyaranyaswami and He brought them back into Hindu Dharma. He also obtained permission from His Guru Shankaracharya Vidyateertha Swami for this. In those times, Vidyaranyaswami displayed extreme courage in converting both the brothers back to Hindu Dharma, due to which South India was saved from becoming Islamic. People then opposed to this conversion, however Vidyaranyaswami declared that Harihar is not going to be the king, Deity Virupaksha is going to rule the kingdom. In the beginning even the royal symbol was made in the name of the Deity in order to satisfy the people.

6. In absence of Vijaynagar Empire, entire
South India would have been in control of Muslim invaders

In Indian history, there were two instances when there was a possibility of India becoming an Islamic state, in 1330 before the rise of Vijaynagar Empire and then in 1689. Vidyaranyaswami, Harihar and Bukka established Vijaynagar Empire and freed southern part of India from river Tungabhadra to Kanyakumari from Islamic control. After Chhatrapati Sambhaji’s death, Rajaram Maharaj became Chhatrapati and the capital of Maratha kingdom was moved from Raigad to Jinji. He gave a bolt to Aurangazeb’s dream of becoming an Emperor. Later Santaji and Dhanaji created a history which is known to everyone. We are highly indebted to Vijaynagar, Vidyaranyaswami, Harihar and Bukka.

Vijaynagar Empire dwelled in prosperity from 1336 till 1565 and later till 1666 it survived like the moon in a dark fortnight. In these 330 years, the honour of keeping Hindu culture alive goes to the four lineages of this Empire. Almost all the kings of this Empire were valorous and loyal to Dharma. By the virtue of the magnificent temples built by them, Hindu philosophy and culture survived and grew further. Harihar, Bukka and Vidyaranyaswami blocked the Muslim invasion. If this was not done then entire southern part of India would have been engulfed by Muslim invasion. Vijaynagar Empire had an effect on Maratha kingdom too. The flame of Hindutva kept lit by Vijaynagar Empire was about to get extinguished and then King Shahaji arrived in Bengaluru. He took over the charge of the flame from the last king of Vijaynagar Empire, Shrirang Raylu and later handed it over to Chhatrapati Shivaji Maharaj. Shahaji Raje owned the region up to Tanjavur. Chhatrapati Shivaji Maharaj brought the Jinji region under the purview of Swarajya during His win in South India.

Vedas
The most sacred Hindu scriptures, revealed directly by God
Dharma
Righteousness
mantra
A syllable or words representing spiritual reality or an aspect of God uttered to protect oneself or to achieve a specific goal