Deepavali – A festival that drives away darkness and lavishly sprinkles Tej (Absolute Fire) ! The tradition of lighting lamps (Here, lamp means an oil lamp of a specific shape made of clay) in every household during the festival of Deepavali started long ago, meaning, during the Tretayuga. When Prabhu Shriram returned to Ayodhya after defeating the King of Lanka Ravan, the subjects welcomed Him with a Deepotsav (Festival of lights). In the present times, when there is a predominance of Raja-Tama (Raja -One of the three basic components in the universe, signified by activity & passion, Tama – One of the three basic components in the universe signified by inertia & ignorance) in the environment, we find the markets flooded with China-made plastic lamps that have an electric bulb. People are also seen having the mentality of lighting wax lamps. However, the old and the knowledgeable still light the conventional lamps made of clay using sesame oil and a wick made of cotton. The clay lamps that are lit using sesame oil and a cotton wick are important from the perspective of sattvikata. The purpose of conducting this experiment was to scientifically study the effect on the environment of the waves emitted when a plastic China-made lamp having an electric bulb is lit, a wax lamp is lit and a traditional clay lamp that has a cotton wick and sesame oil is lit. A UTS (Universal Thermo Scanner) was used for the experiment.

1. The nature of the experiment

In this experiment, UTS readings of a China-made plastic lamp having an electric bulb, a wax lamp and a traditional clay lamp having a cotton wick and sesame oil were taken. A comparative study of all these readings was done.

2. Information on the objects used in the experiment 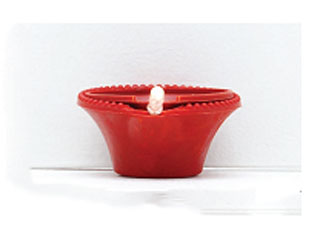 2A. A China-made plastic lamp having an electric bulb

This lamp is made of plastic and has an electric bulb. These lamps are attractive and are mostly manufactured in China. 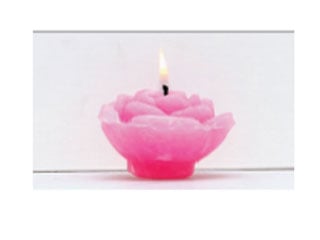 This is actually a wax candle made in the shape of a lamp. 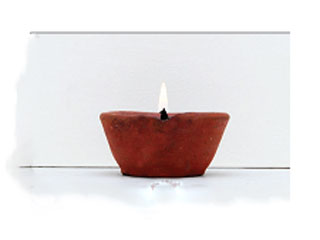 This is an ordinary lamp made of clay and easily available in the market. It is filled with sesame oil and lit using a cotton wick.

Note for readers : Due to shortage of space we have given the common features of UTS on goo.gl/f2n2JW(Please note that some letters are in Caps) – Introduction to UTS, Various components of the scientific experiment conducted with the instrument and description, Measuring the aura of an object using the UTS, Procedure and precautions taken for consistency in the readings, Tabulated observations etc.

3. Analysis of the observations

3A. Finding negative energy in the electric lamp and the lamp made of wax

3B. Finding small amount of positive energy in the traditional lamp lit using sesame oil and a cotton wick; however, not finding it in the other two lamps

It is not necessary that every individual, object or premises will have positive energy. In the observation made for the clay lamp, the arms of the scanner opened 900, indicating that this lamp had positive energy to a small extent. In the electric lamp and the wax lamp, however, there was absolutely no positive energy.

3C. When compared with the electric lamp and the wax lamp, the aura of the clay lamp was more

Generally, the aura of an individual or an object is 1 meter. The auras of the electric lamp, wax lamp and the clay lamp were 1.06 meters, 1.29 meters and 2.17 meters respectively.

The spiritual analysis of these aspects is given in Point 6.

In this experiment, electricity, plastic and wax are all man-made objects; whereas clay, sesame oil and cotton are natural objects. Generally, the Sattva component is predominant in natural objects and Tama component is predominant in artificial objects. An object emits vibrations in the environment that are predominant in it. Due to the sattvik objects, sattvik (Positive) vibrations were found in the clay lamp. Conversely, due to the man-made Tama-predominant objects, non-sattvik (Negative) vibrations were found in the electric lamp and the wax lamp. Due to the Tama-predominant constituents in these, distressing vibrations spread into the environment. From these observations we realise that the clay lamp with sesame oil and lit using a cotton wick is spiritually beneficial.

5. An appeal to brethren on the occasion of Deepavali

Dear brothers and sisters ! Reject the China-made plastic lamps during this Deepavali, light a traditional clay lamp with sesame oil and a cotton wick to avail of spiritual benefits !

Reject the China-made plastic lamps, light a traditional clay lamp with sesame oil and a cotton wick to avail of spiritual benefits !