There are several ways to worship Shri Saraswati Devi. But since She is a deity of knowledge, mere outward rituals are not sufficient to attract Her benevolence. To know how to worship Her, it is absolutely necessary to understand Her Swaroop (subtle appearance of Her idol) by getting to know the Science underlying Shri Saraswati Devi’s Idol. A good devotee of Shri Saraswati Devi is one who tries to grasp Her Divine Functions, and also strives to imbibe the qualities necessary to become Her devotee.

1. The qualities and components necessary
in the devotee for the worship of Shri Saraswati Devi

1A. Curiosity and learning attitude

‘Since knowledge is limitless, for the devotee to be able to imbibe all the knowledge, it is extremely necessary that the devotee has constant curiosity and a learning attitude. Due to these qualities, despite a low spiritual level, a jiva can get knowledge of higher stages of knowledge, talent and art.

1B. Intense yearning (to learn)

When a jiva has intense yearning, it can imbibe knowledge even though its spiritual level is low.

It is extremely necessary that the devotee (along with worshipping the Deity), obtains guidance from a Guru. As a result of continuous guidance, mistakes and shortcomings of the devotee can be realised and corrected immediately. This helps in preventing many years of his life from getting wasted.

If a devotee has concentration, he can worship Shri Saraswati Devi properly and can imbibe greater knowledge in shorter time.

1F. Having righteous and good behaviour

1I. Having a spiritual level above 50%

Shri Saraswati Devi prefers a devotee who has an expansive attitude, when compared with those who have a guarded or narrow minded attitude. Knowledge given to such devotees does not stay limited to them alone as they share that knowledge with all the other jiva as well.

2. What is achieved through the worship

Upanishads accept the relationship between Shri Saraswati Devi and speech. A prayer is made to Her to increase the intellect and for acquiring a sweet tone.

2A. Acquiring the art

Deity Shiva, ShriGanapati and Shri Saraswati Devi are the primary Deities of art and knowledge. To acquire art, the jivashould have concentration, intense yearning and preparedness for hard work; along with this, it should have an inborn spiritual knowledge to acquire the art. On worshipping the above Deities or any Deity for that matter, the jiva can easily imbibe any of the arts. ShriGanapati’s worship destroys the black covering on the subtle-body of the devotee and he can easily imbibe the subtle finer points of that art form. Similarly, worship of  Deity Shiva prevents the wastage of mental energy and helps in the concentration of the mind. The benediction of Shri Saraswati Devi helps in achieving extraordinary intellect.

It is necessary for the jiva to worship Shri Saraswati Devi to acquire the 18  main vidyas and upa-vidyas and also the various subjects or knowledge required in the worldly aspects of our life.

Shri Saraswati Devi holds the Vedas in Her hands. This indicates that She is the Deity of worship for knowledge and She has supreme knowledge. Hence, Her worship helps the jiva easily imbibe the most complicated of knowledge.

Worship of Shri Saraswati Devi makes the devotee’s intellect sattvik. He starts paying minute attention to every action of his and the proportion of mistakes committed by him reduces. Just as the swan separates the milk from the water and drinks it, the evolved devotee‘s intellect becomes so sattvik that God begins to guide him from within. He can then differentiate between Maya and Brahman and look at the Brahman only. Thus, he gets the spiritual experience of Brahman and and reaches the state of Brahman.’

3. Shri Saraswati Devi’s worship
does not enable every devotee to acquire all talents

2. Not worshipping with spiritual emotion

3. Lack of continuity in worship

4. A devotee being rewarded as per his ability : It is not appropriate to expect too much.

5. Devotee has only intense desire for acquiring spiritual knowledge

It is not enough for the devotee to have only intense desire to acquire spiritual knowledge. It is also necessary that he have more than 50% of the qualities mentioned above as well.

When a devotee is attempting to acquire spiritual knowledge or arts under the guidance of a Guru, then with the grace of the Guru, he can acquire a difficult art in a very short time.

(From this, the importance of a Guru can be understood. – Compiler)

Arjun had worshipped Deity Shiva; but along with this, he took guidance from Dronacharya because of which he became the superiormost archer.

4. The importance of Saraswati yantra (A device or
shape which represents a Deity), drawing it on a slate and its worship 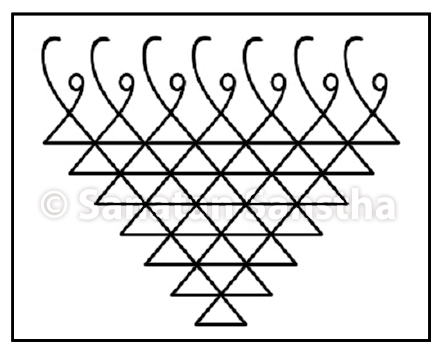 4B. Giving of ‘Saraswati-yantra’ by Shri Saraswati Devi

In Satyayug, some Seers began worshipping Brahmadev. At that time, they had a vision of a Goddess. There was an akashvani (Divine message) that ‘She is Shri Saraswati Devi’. Some of the Seers had already understood this from within (at the subtle level). This pleased Shri Saraswati Devi and She gave them the ‘Saraswati yantra’. – God (Through the medium of Ms. Madhura Bhosale, 11.3.2005, 8.20 p.m. to 9.58 p.m.)

4C. Shri Saraswati yantra and its meaning as narrated by ‘A Scholar’

‘Through this yantra, according to the bhav of the devotee, the sagun and nirgun Principle manifests through all the hands of Shri Saraswati Devi, takes form and works for the devotee in a short period.

The figure with rounded lines made in the middle of the yantra is symbolic of the veena held in Shri Saraswati Devi’s hand which represents Her kriyashakti (Energy of action). 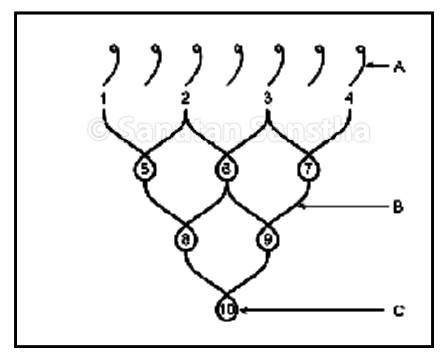 A – Emission of and absorption of Shakti

B – Kriyashakti (The fl ow of energy)

This is the symbol of dnyanshakti in the form of Veda and the japamala in Her hands.

4C 3. The circle within the lines

This is a symbol of Her vehicle, the peacock, and is related to ichhashakti

In this way, the Saraswati-yantra is the actual representation of Her sagun form, and works at a subtler level than the actual Idol.

4C 4. Numbers that go from many to one

The level of the first four numbers in the yantrarepresent the nirgun energy of the four Vedas. Thereafter, through the medium of three numbers, on the basis of ichha, kriya and dnyanshakti, the same energy manifests at the sagun level. Then, at the level of two numbers, it assumes a dvait form and performs the task.

After performing the task, at the level of one number, it attains oneness, meaning merges into advait. Hence, the fl ow of energy from the yantra begins from above, that is, the nirgunlevel, gathers momentum and direction and then, after completing the work, returns to oneness; and thus helps in attaining advait.

4C 5. Rounded lines as in the Marathi numeral 1

The pattern of the rounded lines, like in the Marathi numeral 1, in the upper levels of the yantra denotes absorption and emission of Shakti as per the requirement through the yantra at the universal level.

Shri Saraswati Devi’s work at three levels is clearly understood in the form of the number yantra. In the number yantra, sankhyabrahma is dnyanshakti. The rounded lines joining the numbers, and clearly showing the direction of the movement of energies in the middle level, is kriyashakti. The circular and rounded lines represent the concentration of the Shakti, which symbolises grossness and is thus related to actual ichhashakti.’ – A Scholar (Through the medium of Mrs. Anjali Gadgil, 14.12.2005, 11.47 a.m.)

4D. The main function of the yantra

‘The main function of the yantra is to attract a particular Deity’s Principle and then emit tarak and marak Shakti that are necessary for the devotee in the worship of the Deity.’ – God (Through the medium of Ms. Madhura Bhosale, 11.3.2005)

4F. The necessary element for effective functioning of the yantras

4G. The importance and benefits of the Saraswati yantra

1. There is 3% Saraswati Principle in the Saraswati-yantra. This is benefi cial to the worshipper.

2. Shri Saraswatidevi’s 60% tarak and 40% marak Shakti is emitted by the yantra. Due to this, even though the worshipper’s spiritual level may be as less as 30-40%, he still gets Shri Saraswati Devi’s Shakti and can easily benefi t from Saraswati Principle.

3. The Saraswati-yantra does not work only at the level of Shakti. It also works at the levels of Anand (Bliss) and Shanti (Peace).

4. The yantra contains the tarak and marak Principles of Shri Saraswati Devi along with some special qualities of Mahasaraswatidevi as well.

5. When the worshipper’s spiritual level is above 60%, he can get the spiritual experience of Anand and Shanti from the yantra.

6. The yantra prevents the formation of a black sheath around the mind of the worshipper. The worshipper’s intellect and speech are purified and become sattvik by performing sadhana such as chanting of mantra etc. while looking at the yantra.

7. Shri Saraswati Devi is pleased with and graces the person who worships the yantra regularly with bhav. He is able to grasp difficult subjects in a very short period.

It is because of this importance and benefi t of the Saraswati-yantra that it has become customary to draw it on a slate (like the one used by children) and worship it on the day of Gudhipadva. This is an integral part of the worship of Shri Saraswati Devi.’ – God (Through the medium of Ms. Madhura Bhosale, 11.3.2005, 8.20 to 9.58 p.m.)

4H. The Saraswati-yantra that is usually
drawn,and the one which has been told by ‘A Scholar’

Note 1 – A. The line waves radiating from the pinnacle of the triangle in the yantra are related to desire and spread in the downward direction in the atmosphere. Since there is a greater proportion of Pruthvitattva in these waves, they create a strip of Chaitanya adjacent to Patal(Hell region).

B. A limited amount of other waves coming out of the frontal portion of the rounded shapes spread the desire waves in an upward direction to a limited extent.

Note 2 – The waves drawn out of the frontal portion of the circular drawing showed that the waves are very effi cient in the process of emitting and imbibing at a superior level in an upward direction. – A Scholar (Through the medium of Mrs. Anjali Gadgil, 7.3.2006, 11.53 a.m.)

4I. The importance of worshipping Shri Saraswati Devi
on Gudhipadva and drawing Her yantra on a slate and then worshipping it

‘Gudhipadva is one of the three and half auspicious days. On this day, along with Brahmatattva, Shri Saraswati Principle also descends onto earth 30% more than on other days. On this auspicious day, many begin to imbibe knowledge. For this reason, Her puja (Worship) as well as the puja of Her yantra and Her worship are necessarily performed.’ – God (Through the medium of Ms. Madhura Bhosale)

5. On Gudhipadva, Shri Saraswati Devi’s tarak form and
on Dushehra, Mahasaraswatidevi’s marak form should be worshipped

Shri Saraswati Devi is a Deity who gives direction to kriyashakti; hence, in the beginning of the New Year She is invoked and worshipped so that She blesses us for the entire year. Shri Saraswati Devi’s worship activates the jiva’s Brahmatej (Radiance of a Brahman). Every action performed on the strength of Brahmatej is conducive to the jiva’s spiritual progress. Worshipping Saraswati Devi on Gudhipadva activates the Shaktitattva in the waves related to Brahmatattva that are active in the universe, and they work for the jiva. The jiva’s mind becomes pure and sattvik as it comes in contact with waves, and its Shaktitattva helps make its intellect sattvik. This makes it possible for the jiva to combine good thoughts with good actions.

The jiva’s Kshatratej (Radiance of a warrior) is activated by the worship of Shri Saraswati Devi’s maraktattva on Dushehra.’ – A Scholar (Through the medium of Mrs. Anjali Gadgil)

During Navaratri, worship of Shri Saraswati, Shri Lakshmi and Parvati is performed. Three night’s fast is kept thrice, which is called triratri-vrat.