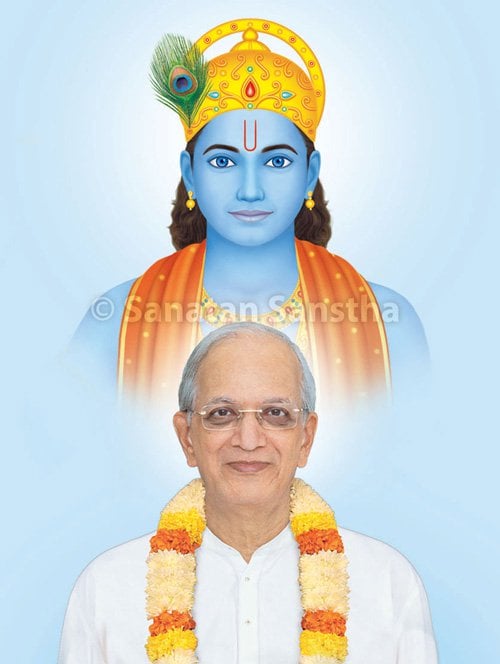 Lifespan of a common man is limited and hence, his birthday is celebrated till his death. On the other hand, God is Anadi (Without beginning) and Anant (Without end); and hence, the birthday of God’s Incarnations (For example, on Ramnavami, Janmashtami) will be celebrated by the devotees till the Dissolution of the universe. Paratpar Guru (Dr.) Athavale has merged with God and hence, despite being in a physical body, He is as good as not being in the body. In nutshell, He is Anant-form and therefore, His birthday will be celebrated by the seekers till the Dissolution of the universe.

2. Seekers getting the experience that
the mission of Dharma is going on merely by
Paratpar Guru (Dr.) Athavale’s resolve, just as in case of God !

God manifested the Creation through His resolve. Today, Sanatan’s mission pertaining to the Nation and Dharma is fast spreading throughout the world. Seekers have firm faith that this mission is going on due to the resolve of Paratpar Guru (Dr.) Athavale. Paratpar Guru (Dr.) Athavale’s mission is going-on on many fronts and publishing of Holy texts is one of the fronts. The examples mentioned ahead pertaining to compilation of Holy texts, support the seekers’ firm faith.

In the year 2001, Paratpar Guru (Dr.) Athavale once asked me to write the points about who is a ‘Kshatriya (Who belongs to the warrior class)’ The very next minute I was able to pen them down one after the other, as if they occurred to me automatically. Later, I began to realise that, though Paratpar Guru (Dr.) Athavale has not actually said something specific, His unexpressed resolve by itself becomes the inspiration to write; because, most of the times, things get written automatically. Other seekers doing the seva of compiling Holy texts get similar spiritual experiences. Not just these seekers, but many other seekers of Sanatan too realise that the write ups about the Nation and Dharma occur to them automatically.

2B. Due to Paratpar Guru (Dr.) Athavale’s resolve a seeker-vaidya
(Ayurvedic doctor) being able to learn the ‘Varma-chikitsa’ mentioned
in Ayurveda and being able to compile a Holy text about the treatment method

Once Paratpar Guru (Dr.) Athavale told a seeker-vaidya from Karnataka (while he was studying medicine), “We have to find the bhut-nadi. If we find it, we will be able to treat seekers through its medium and this will reduce the distress of seekers to a large extent”. The seeker-vaidya took inspiration from this sentence and commenced the search for the bhut-nadi. It is then that he was introduced to ‘Varma-chikitsa’ – a therapy prevalent in the south Bharat since ancient times and known to limited people. The peculiarity of this therapy is that it is not taught to everybody. It is taught only under a Guru-disciple tradition and the Guru teaches a disciple only when he attains a specific level; so also, the training is only in Tamil. With the thought that ‘This therapy will be useful to seekers during the coming adverse times, the seeker-vaidya first learnt Tamil and then learnt ‘Varma-chikitsa’ in just 14 days and also reached the level of a ‘teacher’. Then, he found a book on bhut-nadi in old Tamil language. Presently, he is treating patients using ‘Varma-chikitsa’ and also making notes to compile a Holy text so that this knowledge becomes available to all. He says, “It is only because of Paratpar Guru (Dr.) Athavale’s resolve that I could learn ‘Varma-chikitsa’ in such a short period. Due to His grace I am able to treat patients and also make notes for compilation of the Holy text”.

Seekers express gratitude a million times unto the Holy
feet of Paratpar Guru (Dr.) Athavale for His grace on them !

When Deities wear ornaments, meaning, accept those ornaments, it adds on to the elegance of the ornaments

Likewise, upon Paratpar Guru (Dr.) Athavale’s acceptance of the seekers, meaning, owning them, has added to the grace of the seekers. In other words, they are making rapid spiritual progress. Seekers are expressing gratitude a million times unto His Holy feet for this grace.