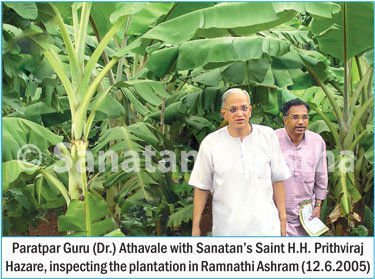 A simple look at Paratpar Guru (Dr.) Athavale’s life and it will be crystal clear that He is a perfectionist. Everything He does is essentially ideal.

He yearns that seekers follow suit and get moulded in the same pattern, that they study every aspect of seva minutely and perform it to perfection in all respects as expected by God. Hence, for Him, guidance through words is just the beginning; He goes far beyond this and moulds seekers through practical action, and this is just one aspect of His remarkable qualities.

Be it planting trees, preparation of the ground during Dharmajagruti Sabhas, sevas associated with Arts or music-dance … name the field and He simply excels in each. All this proves but one thing – that He is an Incarnation !
Many a time, when we hear the word ‘Guru’, we visualise someone sitting on a pedestal and guiding a whole lot of followers.

On the other hand, Paratpar Guru (Dr.) Athavale personifies ‘Leading from the front’. He participates in every seva with the seekers and guides them on God-realisation through that seva. Blessed are Sanatan’s seekers !

He has even taught seekers aspects such as ‘How to pluck flowers’, ‘How to fold and keep the the doormat aside while sweeping’ etc. These small but precious acts that run into thousands, are deeply engraved in the memory of the seekers. Given ahead are a few selected examples.

We express our infinite gratitude to Him for these teachings !

Since Year 2008, Paratpar Guru (Dr.) Athavale has united people and organisations extensively through the medium of Sarvasampradaya satsangs, Public meetings and later through Hindu Dharmajagruti Sabhas. The preparations for these meetings were done by the seekers themselves under His guidance.

Guiding Seeekers on ‘Art for God-realisation’

Sanatan’s studio that has been fitted with most modern equipment

Paratpar Guru (Dr.) Athavale participates in every seva with the seekers and guides them on God-realisation through that seva. Blessed are Sanatan’s seekers !

seva
Service unto the Absolute Truth, that is, God Principle