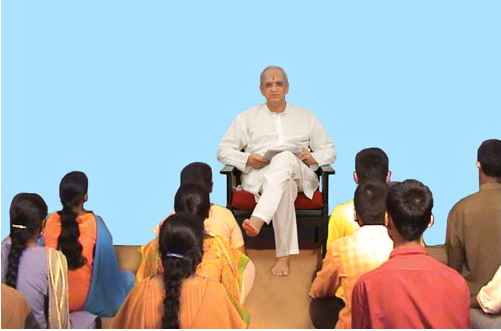 1. Participation in Gurupournima festival in Mumbai

1A. Setting up an exhibition in the Gurupournima festival
to spread Spirituality and teaching how to propagate Spirituality

Gurupournima festival has large attendance. To avail of the opportunity to propagate Spirituality, Paratpar Guru (Dr.) Athavale asked us to set up an exhibition. The seekers in Mumbai performed sevas of preparing boards for this. We set up a stall for the exhibition during Gurupournima. Paratpar Guru (Dr.) Athavale would minutely oversee various preparations of the exhibition such as sketches, placement of boards, deciding on their sequence, how the placement would look better and appropriate, about dissemination of information on Spirituality etc., and He would also suggest necessary changes to make the exhibition more effective. Viewers would automatically get information on the programmes of Sanatan; this would save time in explaining to every individual separately, and the propagation of Spirituality would not take much time. Thus, He taught us how to perform seva (Service unto Absolute Truth) in the best manner by studying all finer points of the seva.

1B. Encouraging seekers to perform sadhana
by giving an example of the progress made by a seeker
who was performing seva during the Gurupournima festival in Mumbai

After the Gurupournima festival in Mumbai, Paratpar Guru (Dr.) Athavale told us that the spiritual level of one seeker, Mr. Satyavan Kadam (now, Sadguru Satyavan Kadam) increased by 3% just by performing seva in the Gurupournima festival in Mumbai day and night for 3 months. This encouraged all seekers, who decided to increase their sadhana (Spiritual practice) and progress spiritually.

‘Introduction to Spirituality’, a Holy text based on knowledge received by Paratpar Guru (Dr.) Athavale from Saints, was released during the Gurupournima festival in Mumbai. The practice of releasing new Holy texts at the hands of Saints during every Gurupournima festival is continuing. He taught the seekers the Principle that Gurus or Saints have no interest in the material world; they like spreading Spirituality.

1D.Organising programmes of H.H. Bhaktaraj Maharaj (Baba)
in Goa and experiencing that Saints are aware of every activity going around them

To mould seekers, seva should be made available to them; similarly, they should benefit in the subtle too. To achieve these objectives, Paratpar Guru (Dr.) Athavale organised two programmes of Baba in Goa from 1992 to 1995. On these occasions, the seekers were fortunate enough to perform sevas such as putting up an exhibition, managing footwear, serving Saints, distributing Prasad (Holy sacrament) etc. Seekers used to express their preferences while performing sevas. Some would be disappointed for not getting the seva of serving Saints, getting introduced to Saints etc. Paratpar Guru (Dr.) Athavale would tell them that in Spirituality personal likes and dislikes do not matter. Saints know about every seeker. Seekers would also experience accordingly.

Once Baba was to address seekers in Sawantwadi while returning from Goa. After the guidance in Goa, all seekers gathered to see Him off. Everyone wished that Baba just glance at them. However, Baba called one seeker who was standing far from Him. In fact, this seeker used to perform a lot of seva during His stay, but was seeing Him off from a distance as he could not reach earlier due to some urgent seva.

Thus, all seekers learnt that Saints are aware of every activity going around them. Such practical experiences could mould the seekers in a better way.

2A. Follow up by Paratpar Guru (Dr.) Athavale to ensure
that every seva takes place as planned and encouraging seekers to perform it

After the Gurupournima festival in Mumbai, Paratpar Guru (Dr.) Athavale decided to celebrate Gurupournima festival in Goa. By that time, the number of seekers in Goa had increased substantially, and they also realised the importance of seva. Hence, seekers in Goa performed all the tasks of Gurupournima with the help of seekers from Mumbai. At that time, Paratpar Guru (Dr.) Athavale took all seekers into confidence and planned the seva of each seeker. He would follow up continuously to ensure that every seva takes place as planned. On the eve of Gurupournima, He visited every place and ensured that everything was as planned. He suggested changes wherever required. He encouraged seekers to perform seva.

2B. Paratpar Guru (Dr.) Athavale pointed out
mistakes of seekers and taught how to rectify them

Just 2 days before Gurupournima, a food item (Khichari) remained somewhat uncooked. He asked us to find out what had gone wrong. He said that such a mistake would be very serious in nature if repeated the next 3 days. At that time, cooks were hired from outside since there was a shortage of seekers. As an alternative, He then deputed one seeker with the cooks, and every food item was cooked perfectly after that with His grace.

All seekers performed seva enriched with bhav (Spiritual emotion) during the Goa Gurupournima. Baba was very pleased with the sevas and blessed that Goa would become a beacon for the whole world. Sanatan’s Ashram at Ramnathi was built after some years. This demonstrated the omniscience of Saints.

3. Ensuring that seekers progress in seva

3A. Propagating Spirituality in Goa

After the Gurupournima in Goa, Paratpar Guru (Dr.) Athavale asked seekers to organise lectures on Spirituality in Goa. For this purpose, He told them to narrate the basic Principles in Spirituality, the importance of sadhana and chanting the Name of the Kuladevata (Family Deity) in the lectures. After those lectures, He planned to invite the spiritually curious people who were attending these lectures for workshops in Goa on Spirituality.

3B. Along with vyashti sadhana, teaching seekers
how to perform samashti sadhana through lectures

Seekers went to various places in Goa to deliver lectures. They used to meet all types of people in the society. Seekers used to receive guidance on how to explain sadhana which would suit the variety of people. When some attendees of lectures came for workshops, Paratpar Guru (Dr.) Athavale would ask us to interact with them. When we would tell Him the obstacles faced in spreading Spirituality, He would promptly guide us on how to overcome the obstacles.

3C. Some voluntarily deciding to become full-time seekers upon comprehending the next stage of sadhana, and Paratpar Guru (Dr.) Athavale guiding them on how to behave from the perspective of sadhana

As the spread of Spirituality gathered momentum and seekers realised the importance of samashti sadhana, some of them decided to become full-time seekers of their own volition.

When such a decision was taken by them, their family members and people in the society started debating about the pros and cons of their decision. Some seekers faced opposition at that time. Paratpar Guru (Dr.) Athavale used to guide them time and again on how to behave in such situations. Gradually, many seekers became ready to devote themselves full-time to spread Spirituality. These seekers were certain that Paratpar Guru (Dr.) Athavale would take care of them. He would pay full attention to every seeker who had taken this decision. He used to guide them regularly on aspects they needed to follow regarding their sadhana.

3D. Organising public meetings for the progress of seekers

4. Telling seekers their mistakes so as to mould them

4A. Seekers used to perform seva of organising public meetings and commit certain mistakes in the process. After the meeting, Paratpar Guru (Dr.) Athavale would Himself review the efforts made and guide on how to avoid mistakes that were committed while organising meetings. If He did not notice improvement even after pointing out mistakes, He would even rebuke seekers before others.

4B. Review of mistakes by seekers in the meeting itself : Once during a meeting in Ratnagiri, Paratpar Guru (Dr.) Athavale called seekers onto the dais and reviewed the mistakes committed by them. All this happened in the presence of people attending the meeting. This was a new experience for us. However, through this incident He showed us how important it is to mould seekers in this manner.

seva
Service unto the Absolute Truth, that is, God Principle
Samashti sadhana
Spiritual practice for the spread of Spirituality
Prasad
Offering made to God and then distributed to devotees
Ashram
A place where a seeker can remain engrossed in spiritual practice through spiritual discipline