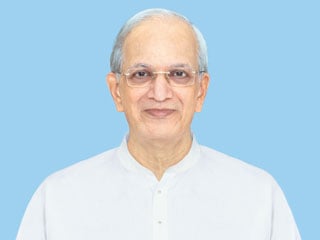 2A 1. The Gurutattva (The Guru Principle) educating on various aspects of Dnyan (Knowledge), Bhakti (Devotion) and Karma (Action which gives rise to destiny)

Due to Paratpar Guru (Dr) Athavale’s yearning, the Gurutattva imparted Him knowledge on Dnyanyoga, Bhaktiyoga, Karmayoga and the other practical aspects of spiritual practice.

2A 2. The Paths of Yoga and subjects taught by various Saints to Paratpar Guru (Dr.) Athavale 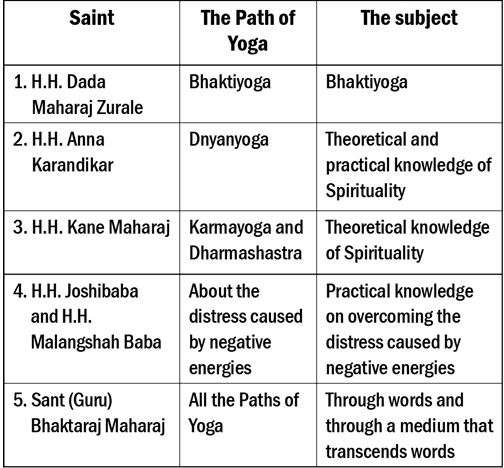 2A 3. Presenting the teachings of Saints in scientific terminology : Paratpar Guru (Dr) Athavale compiled the knowledge He obtained from various Saints and presented it in a spiritual terminology. In 1987, Paratpar Guru (Dr) Athavale published His first cyclostyled Holy text titled ‘Spirituality’. After publishing this Holy text, He commenced His march towards samashti Dnyanyoga.

2B 1. Sant Bhaktaraj Maharaj made Paratpar Guru (Dr) Athavale perform sadhana that strikes a balance between Dnyan, Bhakti and Karma, due to which He became a Saint in just 1½ years

2B 3B. Spiritual experience : A lady-devotee of Sant (Guru) Bhaktaraj Maharaj was in distress and she fell asleep praying to Him. In the night, Sant Bhaktaraj Maharaj came in her dreams and said to her, “Do not pray to me now. Pray instead to my disciple (Paratpar Guru [Dr] Athavale)”. (Reference of the premonition and the spiritual experience : Sanatan’s Holy text – ‘Gurukrupayoga’, 1st Edition.)

2B 4. Reason for referring to Paratpar Guru (Dr) Athavale as He is Vishwaguru in the Dnyan obtained

One who performs a mission which affects the universe that has countless worlds : God created the universe. There are innumerable creations within this Creation. Our earth is one such Creation. Each Creation has a different time period in operation at any given time. Some are being created, whereas, some other are in the process of Dissolution. A Guru who takes up a mission that is conducive to all the Creations is called a ‘Vishwaguru’ or ‘Jagadguru’.

2B 4B. Since the mission of other Gurus who exist in body-form is at the sagun level, it has limitations

Gurus who exist in the body-form, carry their mission as per the guidance of the Gurutattva. As a result, their mission is at the sagun level and is limited to the current period of one Creation and the gross as well as the subtle world associated with that Creation. Their mission does not have any effect on the existence of the infinite world. As a result, they are not able to guide their devotees after a few thousand years; so also, the knowledge they impart is associated with the current time and the devotees associated with this time. Hence, it is not beneficial to the jivas (Embodied souls) for their spiritual progress in future.

2B 4C. Unique features of the mission of Vishwaguru or Jagadguru

The mission of Vishwaguru or Jagadguru is not bound by the limitations of place. Hence, the knowledge that materialises from the nirgun as a result of their mission, impacts the world. It is because of Vishwaguru that knowledge conducive to the samashti manifests from the nirgun into the sagun. Therefore, when the jivas that have taken birth in the current Creation, take birth in another Creation as per the prevailing times, they teach the other jivas samashti knowledge. Guidance provided by Vishwaguru or Jagadguru is the guiding force to the jivas in this infinite Creation, such as the guidance of Shrikrushna through the medium of Shrimadbhagwadgeeta.

2B 4D. The mission of Paratpar Guru (Dr) Athavale is impacting the entire universe

In the form of Gurukrupayoga, Paratpar Guru (Dr) Athavale has performed the mission of providing the society with knowledge pertaining to samashti sadhana – sadhana as per the prakruti (Basic nature) and changing the prakruti. This mission has impacted the entire world, and hence, Paratpar Guru (Dr.) Athavale is called a Vishwaguru of the respective times in the knowledge obtained.’

2B 4E. Difference between Vishwaguru or Jagadguru

One who guides the whole world is a Vishwaguru. The mission of a Vishwaguru is for a specified period. Conversely, one who takes up a mission that transcends place and time, is helpful to the samashti for a long time or is beneficial for sadhana of the jiva of subsequent births and also provides guidance is a Paratpar Guru.

2B 4F. God creating Gurukrupayoga through the medium of Paratpar Guru (Dr) Athavale since He is a Vishwaguru and has authority over Dnyan, Bhakti and Karma

2C. The stages in the process of Paratpar Guru (Dr)
Athavale propounding the concept of Gurukrupayoga

Even in a natural state of communion with God, Paratpar Guru (Dr) Athavale’s mind and body would merge with the Universal mind and Universal intellect because of His samashti sadhana (Spiritual practice for the welfare of the society). In this period, His mind and intellect would be in a thoughtless state. In this state, He would obtain subtle knowledge pertaining to Gurukrupayoga.

2C 2. Upon examining the state of many jivas, the mind and intellect comprehending knowledge in the subconscious mind in the form of thoughts

During the propagation of Spirituality in the society, as per the law of image and reflection Paratpar Guru (Dr) Athavale would be able to understand the state of sadhana of a jiva who was stagnating in sadhana. His mind and intellect would then comprehend the solution in the form of thoughts to the difficulty being faced by the seeker in his sadhana from the knowledge in his subconscious mind. These thoughts are about the laws, principles and the mistakes to be avoided as per sadhana according to Gurukrupayoga.

2C 3. A jiva getting proof upon being guided as per the laws, principles and the mistakes to be avoided

2C 4. Paratpar Guru (Dr) Athavale is a research-oriented individual by nature, and hence, Gurukrupayoga was created in a scientific manner and will help crores of jivas till the end of Kaliyug

Every behaviour, action, law and principle created by God is spiritually perfect from the physical, psychological and spiritual perspective. The capability of a jiva has reduced as per the significance of time, and as a result, the perfection in behaviour too is declining. Paratpar Guru (Dr) Athavale is a research-oriented individual by nature, and hence, crores of jivas will benefit from Gurukrupayoga till the end of Kaliyug

4. The individual brilliance of Paratpar Guru
(Dr) Athavale as the reason for God making him the medium 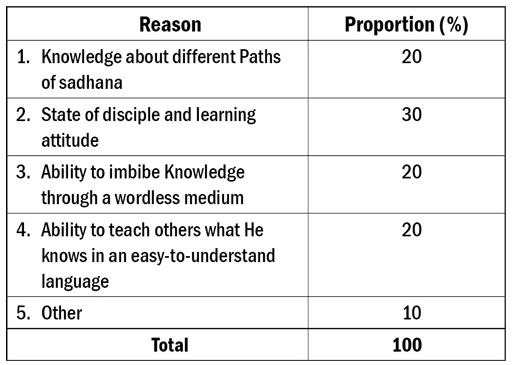 5. The importance of Gurukrupayoga when
compared with other Paths of Yoga and its unique features

Most jivas that get attracted to sadhana have a subtle sanskar (Subconscious impression) of sadhana according to some or the other Path of Yoga on their minds. Other Paths of Yoga pursue only one aspect of sadhana. Conversely, Gurukrupayoga incorporates all the Paths of Yoga. Therefore, irrespective of the Path of Yoga according to which a jiva is performing sadhana, it can still accept very easily the laws, principles and practical aspects of Gurukrupayoga and perform sadhana.

5B. Balancing of pravrutti and nivrutti

Other Paths of Yoga are either pravrutti-predominant (Inclination towards participation in worldly affairs) or nivrutti-predominant (Inclination towards cessation of participation in worldly affairs). As a result, a jiva has to take birth in the bhog-yoni (Species that assumes a gross body for undergoing destiny or worldly pleasures) or there is a possibility of it getting trapped in the cycles of birth-and-death because of its give-and-take account. Contrary to this, there is a balance of pravrutti and nivrutti in Gurukrupayoga. Hence, even if a jiva is treading the Path of nivrutti, since it fulfils its duty-related karma, which does not get transformed into accumulated prarabdha or samashti prarabdha. Besides, though it appears physically that the jiva is treading the Path of pravrutti, it treads the Path of nivrutti mentally. As a result, whatever karma it does in worldly life is performed as sadhana, due to which no new give-and-take account is created.

In other Paths of Yoga, jivas are first asked to complete their vyashti sadhana and only then their samashti sadhana commences. A jiva has to take many births in this process. Conversely, vyashti as well as samashti sadhana is taught in Gurukrupayoga. This saves the jiva’s invaluable time and makes it progress faster spiritually.

In other Paths of Yoga, there is more of theoretical knowledge, which is associated with Dnyanshakti (Energy of knowledge). As a result, jivas that have less sattvikta fail to understand the principle in the Path of Yoga. When jivas perform sadhana for long periods with faith, their sattvikta increases. Thus, they understand the theoretical aspect of the Path of Yoga and are able to act accordingly.

5E. Creating the sanskar of sadhana on the subconscious mind of the jiva

The constitution of other Paths of Yoga is not conducive to the prakruti (Basic nature) of a jiva. As a result, while performing sadhana according to other Paths of Yoga a jiva has to make changes in its prakruti. In this process, the jiva faces a lot of resistance and as a result, the sanskars of sadhana are not created adequately on the subconscious mind of the jiva. Conversely, in Gurukrupayoga, the sadhana is conducive to the prakruti of the jiva and results in creation of a strong sanskar of sadhana on its subconscious mind. Due to the strong sanskar of sadhana on its subconscious mind, the jiva’s sadhana continues in superior regions after its death.

5F. Getting sadhana performed through the sufferings due to prarabdha

5G. Teaching sadhana as one progresses

To attain Moksha (The Final Liberation) a jiva has to perform sadhana according to each of the three Paths – Dnyanyoga, Bhaktiyoga and Karmayoga. Most of the jivas complete vyashti sadhana by treading one Path of Yoga, and to complete their sadhana, they perform sadhana according to other Paths as they progress spiritually. As they tread one Path of Yoga, they complete their sadhana treading the same Path, such as a jiva treading the Path of Dnyanyoga for vyashti sadhana performing Dnyanottar-bhakti (Devotion upon obtaining knowledge) and Dnyanottar-karma (Karma upon obtaining knowledge). Conversely, Gurukrupayoga strikes a balance between Dnyan, Bhakti and Karma. As a result, a jiva treading the Path of Gurukrupayoga is not required to perform different types of sadhana upon progressing spiritually. Besides, jivas whose sadhana upon progressing spiritually is due, perform sadhana according to Path of Gurukrupayoga, they progress faster spiritually.

5H. A faster path of sadhana

A faster path of sadhana is predominantly Vayutattava-related. Hence, it enables significant emission-related activity with the help of energy of bhav (Spiritual emotion) from the Anahat-chakra. Gurukrupayoga primarily incorporates samashti, and hence, one can progress faster spiritually. (Sanatan Sanstha teaches sadhana as per Gurukrupayoga. – Compiler)’

5I. Merging the jiva with the Guru Principle

Conversely, in Gurukrupayoga, a jiva performs eightfold sadhana, and hence, merges directly with the Guru Principle. The Guru Principle incorporates all the Principles, and hence, the jiva attains Moksha. Consequently, it has no more births; for example Sant Bhaktaraj Maharaj.

Subtle : That which is beyond the visible five sense organs, mind and intellect is ‘subtle’. Individuals who have progressed spiritually are able to comprehend the ‘subtle’ vibrations. There is a mention of ‘subtle’ knowledge in various Scriptures.

In Gurukrupayoga, a jiva performs eightfold sadhana, and hence, merges directly with the Guru Principle !

Kundalini
Dormant spiritual energy in the subtle-body. It is coiled like a serpent and consists of one central channel and two channels on its sides
Sanskars
Subconscious impressions
Samashti sadhana
Spiritual practice for the spread of Spirituality
Karma
An act that becomes destiny, meaning, leads to a give and take account that has to be settled
Kaliyug
Era of strife (The present era, amongst the four eras)
Jiva
Embodied soul
Gurukrupayoga
Path of Guru's grace, which incorporates eight steps
Ashram
A place where a seeker can remain engrossed in spiritual practice through spiritual discipline