During spiritual practice, chanting, performing nyas and making a mudra while chanting are very beneficial. There is a saying in Marathi which means – A good quality seed produces sweet and beautiful fruits – in other words, good thoughts produce good deeds.

The sanskars performed by the parents on their children do reflect in the behaviour of the children. There are many examples in history that prove this aspect. While Pralhad was still in his mother’s womb, she was taught Bhaktiyoga (Path of Devotion unto God) by Naradmuni. As a result, Pralhad imbibed knowledge about devotion while still in his mother’s womb. Though born in a demon family, by chanting the Name of Narayan (Shri Vishnu), he came to be known as ‘Bhakta Pralhad’ (Bhakta means devotee; however, here it is a title and means ‘The most superior amongst devotees’.)

Scholars of Spirituality have said that if a pregnant woman performs spiritual practice, it has a positive impact on her womb; and if the child (to be born) is Sattva-predominant, the mother-to-be also benefits.

We conducted scientific a experiment using PIP (Poly-contrast Interference Photography) technology to study the effect of chanting and performing nyas & making a mudra while chanting on the environment around a pregnant woman. Related observations are given ahead.

Note 1 : Since this experiment has been conducted for testing auras in the environment,
while comparing the aura (in PIP photos 2 & 3) with the Baseline aura (in PIP photo 1) the colours of the bench and the woman have not been considered.

1. Intention of the scientific experiment

To understand the extent of positive vibrations in a sample (an object, a premises, an animal or an individual), whether a sample is sattvik (Spiritually pure) or not and whether it is spiritually beneficial, it is necessary to have the ability to understand the subtle dimension. Saints who are at a high spiritual level have this ability and hence, can correctly identify the vibrations in every object. Devotees and seekers have faith in every word of Saints; they consider their words to be final testimony. However, rationalists do not have faith in words; they ask for proof. Only when any aspect is proved through scientific analysis, meaning, proved using some equipment, they believe in it.

In this experiment we have chosen PIP photos of a pregnant woman in three stages – 1. Before commencing to chant, 2. While chanting and 3. While making a mudra and using it to perform nyas while chanting.

Through the experiment, we were able to ascertain the effects of chanting, mudra and nyas on the environment around the pregnant woman.

3. Information on constituents of the experiment

A. Lady-seeker participating in the experiment

The experiment was conducted on a lady-seeker on 8.9.2014 using PIP technology while she was 6-months pregnant. She was 29-years-old at the time of the experiment. The lady-seeker, her husband and other family members have been performing spiritual practice under the guidance of Sanatan Sanstha since 2008.

When the lady-seeker was asked to perform nyas during the experiment, she made a mudra by bringing together the tips of the thumb and the fingers of the right hand and performed nyas by holding the hand 1-2 cms. away from the Manipurchakra (at the navel).

4. Precautions taken during the experiment

A. During the experiment, a special room was used to take the PIP photos. For the colour of the walls and roof to not affect the colours in the aura of the lady-seeker, the walls, roof were painted white. 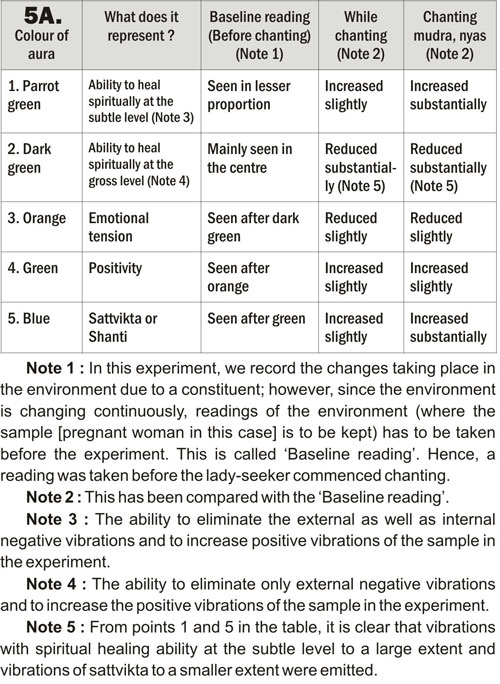 A. Colours of the aura seen in PIP photos, what they signify and the increase and reduction in their proportion (PIP photos 1 to 3)

When compared with the reading taken before commencing to chant (Baseline reading), upon chanting, making a mudra and performing nyas, there is increase or reduction in the colours of the aura around the individual. This increase or reduction is according to the vibrations associated with the colours emitted by the indivi-dual; for example, if after chanting there is a significant rise in the emission of vibrations of sattvikta, the proportion of blue in the aura increases; if the vibrations of sattvikta are not emitted or if the emission is less when compared with the emission of other vibrations, the proportion of blue in the aura reduces. Remember this while reading Table 5A.

B. Proportion of spiritually beneficial vibrations according to the
proportion of various colours in the PIP photos (Table 5B). 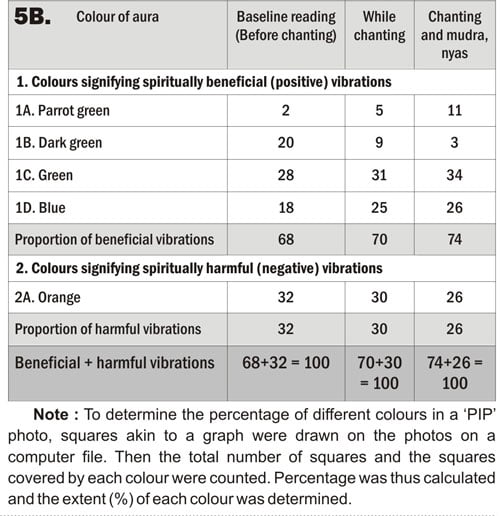 C. Analysis of observations and the conclusions

C 1. Sattvik environment in Sanatan Ashram and the individual being a seeker (performing spiritual practice) resulting in higher proportion of positive vibrations in the Baseline reading

C 2. The fact that the sattvik vibrations are towards the stom-ach of the lady-seeker making it clear that the child is sattvik

The Baseline reading of the lady-seeker shows a flow of blue (representing sattvikta) and the reading taken while she makes a mudra and performs nyas while chanting shows the flow of green (representing positivity); however, these flows are not seen on her back. This indicates that the baby in her womb is sattvik.

C 3. That the baby in the womb is sattvik is one reason for the greater extent of positive vibrations recorded during the Baseline reading

Though the lady-seeker who participated in the experiment had complications during her pregnancy, she delivered a baby girl on 4.12.2014. The new-born was at a spiritual level of 61%, meaning, she was sattvik. This was one reason for recording greater extent of positive vibrations during the Baseline reading.

C 4. More than merely chant-ing, making a mudra and using it for nyas while chanting is helpful in increasing positive vibrations in the individual

Chanting, mudra and nyas during spiritual practice helps an individual spiritually. Generally, it increases the extent of positive vibrations emitted by the individual.