A study tour of South-east Asian countries by a group of students from the Maharshi Adhyatma Vishwavidyalay under the guidance of Sadguru (Mrs.) Anajli Gadgil

The Kambhoj desh referred to in the Mahabharat is the Cambodia of today. Hindus have been inhabiting it since the 17th century. It is believed that the Khmer Hindu empire existed there from 802 to 1421 B.C. Actually Kambhoj desh was the territory of Sage Kaundinya; it is also Naglok (region of serpents). A reference is also found of the King of Kambhoj desh participating in the Mahabharat war. As it is Naglok it is also the territory of Deity Shiva. It is said that the vehicle of Shri Vishnu, Garud lies on Mahendraparvat so it is also the territory of Deity Vishnu. To summarise, it is the territory of Harihar (Hari is Vishnu and Har is Shiva). Here are some highlights of the tour of Sadguru (Mrs.) Anjali Gadgil of Adhyatma Vishwavidyalay and four student seekers accompanying her. 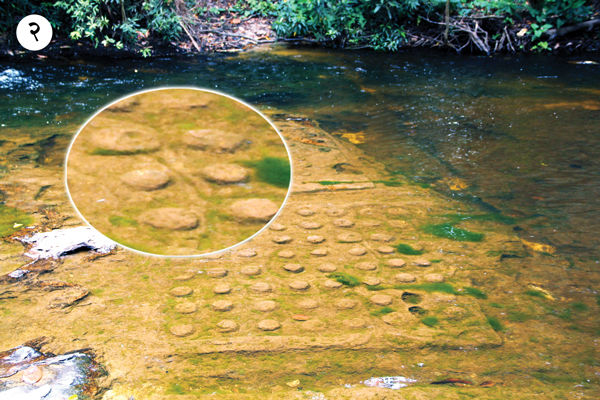 Mahendraparvat lies to the north of Kumbhoj mountain and the river Mekang flows southwards from the north with the sea in the south. Mahendraparvat was the capital of the vast Kumbhoj desh locally now called Kulen mountain. The ruins of the city built here by the Hindu kings is being discovered in excavations. Till the 10th century Hindu kings ran the royal administration from there. They bestowed river Kulen originating from Mahendraparvat with the status of a sacred river like the Ganga.

2. To make river Kulen pure like the Ganga King Jaivarman II blocking its flow, creating more than 1000 Shivalingas and sculptures of Sheshashayi Vishnu and Shri Mahalakshmi in the river bed and then redirecting the water flow. The Shivalingas and other sculptures of the 8th century can be spotted even today

In the 8th century King Jaivarman II contemplating on how to make river Kulen pure like the Ganga devised a plan. Thinking that river Ganga is pure because it arises from the matted hairlocks on the head of Deity Shiva so if river Kulen flows from the head of Deity Shiva, that is if it is touched by Him then it too will become pure. Besides wherever it flows the soil too will become fertile. The king wished that His subjects get water purified by the touch of Deity Shiva hence he first blocked its water. After sculpting more than 1000 Shivalingas in its bed and some small and one large sculpture of Sheshashayi Vishnu (Shrivishnu reclining on Sheshnag with Shri Mahalakshmidevi seated at His Holy feet) he redirected the flow of water. These lingas sculpted in the 8th century exist even today but no one can pay homage to them, they are visible in the river bed if you walk for upto 200 metres towards its north. When the river flows very slowly the sight is a wonder to the eyes.

2. Rock from Mahendraparvat appears to have been
used in building most temples and premises in the Khmer empire

Mahendraparvat is formed from sandstone so it appears from accounts of historians that most temples and premises constructed here used sandstone. This mountain has one small and one large waterfall which are a tourist attraction.