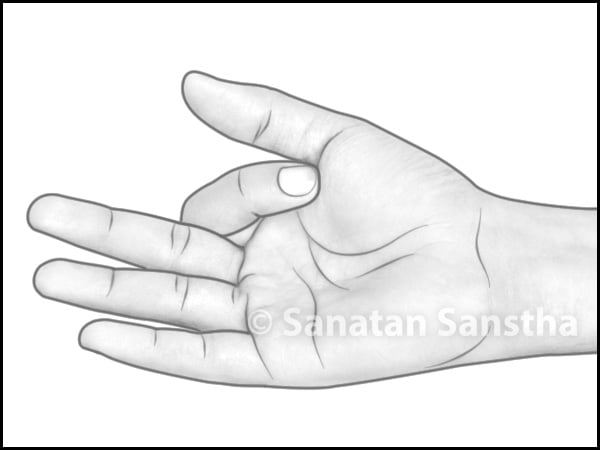 After locating the obstruction in the flow of Pranashakti, so also in finding the mudra and Namjap through the experiment, the upays have to be performed while chanting. Hence, it is necessary to understand how to perform the nyas. Upon making the mudra, perform the nyas as mentioned in Table A below.

B. Method of performing upay

1. Performing upay by moving fingers in the region of nyas

A. Principle : Decide the direction of upay by moving the fingers from bottom to top or from top to bottom and perform upay accordingly.

3. At times, in the region identified for nyas, breathlessness is experienced while moving the fingers upward as well as downward. At such times –

4. Move the fingers from the Sahasrar-chakra backwards in a straight line to the point where the hairline ends and back to the chakra. While moving the fingers both ways, the direction in which greater distress is experienced is to be taken as the direction of upay; perform upay accordingly.

2.    Performing upay by moving the fingers over the affected organ

A. Principle : Depending on the ailment, deciding direction of moving the fingers over the organ and performing upay accordingly.

Some examples of upay in specific instances are given ahead.

1. If there is swelling of legs, move the fingers very slowly over the legs from the bottom to top.

2. If urine is blocked, move the fingers from a spot 2-3 cms. below the navel upto the Swadhishthan-chakra repeatedly.

3. If there is constipation, commence from the direction of the big intestine, meaning, commence moving the fingers from the right side bottom of the stomach and move them upto the ribcage. Then, move them horizontally to the left side, and then down towards the anus. Keep repeating the process.

3. Performing nyas at the Kundalini-chakra or the organ associated with the ailment

4. Performing nyas at the Sahasrar-chakra by joining all fingers or by using the palm

A. Those suffering from distress due to negative energies

If nyas is performed at the Sahasrar-chakra by those suffering from distress by joining all fingers or by holding the palm 1-2 cms. away from the chakra, they will be subjected to upay.

B. Those not suffering from distress due to negative energies

If those who do not suffer from distress perform nyas at their Sahasrar-chakra by joining all fingers and hold them 1-2 cms. away from the chakra, they will experience awakening of their bhav (Spiritual emotion). The extent to which bhav will awaken is more when the palm is used near the Sahasrar-chakra instead of the fingers.

Instructions to be followed during upay

Aspects to pay attention to while performing upay

1. Everyone and those who suffer from severe distress due to negative energies, should perform upay with Namjap.

A. Distressing energy is emitted by the fingers of those who suffer from severe distress due to negative energies. If these fingers are used for upay, the distressing energy will be transmitted to the body (on which upays are being performed). As a result, if upays are not accompanied by Namjap, it will increase the distress. If due to distress an individual is unable to chant, he should not perform upay on himself.

He should instead go for Ayurvedic treatment or upays of empty boxes etc. Those who suffer from mild to moderate distress can chant, and hence, they can treat themselves.

B. In the present Kaliyug (Era of strife), the predominance of negative energies has increased to such an extent that almost every individual suffers from distress due to negative energies to varying extents. Therefore, it is best that everyone perform upays along with Namjap.

1. As far as possible, use the right hand for upays

It is best that we use the right hand (since it is associated with the Suryanadi for upays which are directed at elimination of obstructions in the Pranashakti flow system. Normally, upays go on for a few hours, due to which the hand begins to pain. When this happens, switch to the other hand.

2. If you find obstructions at two different spots, use both the hands for upay simultaneously at both the spots. If only one spot is located, use one hand for upay at the spot and make a mudra with the other.

3. If obstructions are at the Kundalini-chakra as well as at different parts of the body, perform upay at two spots, where the intensity of the obstruction is more.

4. While performing upay, intermittently find the new spot of the obstruction and perform upay over that spot

After finding the spot for nyas the first time and commencing upay at that spot, every 20 to 40 minutes, find out if new obstructions have developed; for, the location of the obstructions changes due to the upay or at times it is changed by the negative energies themselves. Perform upay on these new spots.

5. Rules to follow if you are unable to find the precise mudra or Namjap through the experiment

At times, during the experiment to decide on a suitable mudra, the feeling during two different mudras is identical. At such times, make the two mudras a few times to notice the difference and then decide on the precise mudra. If you still cannot decide, then make mudra of the higher tattva (Principle) from amongst the Panchatattvas. Follow this rule while conducting the experiment for finding the Namjap mentioned in ‘Point B. Namjap and mudras associated with superior Deities and the nirgun’, published in the second Part of this series (1-15 December).

6. Perform upay at the spot of the obstruction by holding the fingers 1-2 cms. from the body

While moving the fingers for performing upay, hold them 1-2 cms. from the body. The aged as well as sick might find the need for support (for the hand) during nyas. In this case, they can touch the body and perform nyas.

D. Prefixing the Namjap with ‘Om’ or ‘Maha’

1. Prefixing and suffixing Namjap with ‘Om’ during the upay

B. For one who performs spiritual practice

2. Prefixing ‘Maha’ to a Namjap

Prefixing ‘Maha’ to some prevalent Namjaps (Examples – Ganapati, Lakshmi, Vishnu, Rudra) just as ‘Om’, is also beneficial. It gives greater benefit of the nirguntattva and helps reduce the distress faster.

1. The individual should perform the upay for a minimum of two hours a day till the distress is eliminated

Sometimes, the distress can get cured before two hours are completed. If this happens, stop the upay.

2. If with the upay (decided through the experiment) there is some reduction in distress after 1 hour, continue with the upay.

3. If even after one hour of the upay there is no improvement at all, experiment once again to find the correct upay and perform it.

F. Upon completion of the upay
express gratitude unto your Deity of worship.

G. No harm in continuing with
other treatments simultaneously with the upays

While continuing with these upays, one need not stop other treatments such as upays using empty boxes, medicines, magneto therapy etc.

Who should not try to find the upay ?

Those who suffer from severe distress due to negative energies should not try to find the upay themselves; for, the negative energies interfere and make sure that the findings of the experiment are incorrect. Such individuals should select one of the following options.

If those suffering from severe distress due to negative energies have bhav (Spiritual emotion), they can try to find the correct upay for such individuals and get it checked from someone else. They should also study if the upay are having a positive effect on them. If they observe a positive change as a result of the upay, then continue with them.

Note : Which upay to perform if you are unable to find the spot for performing nyas, mudra and the Namjap as given in the text above, is also given in the Holy text under reference.

Readers should preserve all the 3 Parts of this series for their reference.

For complete understanding of the subject, get your copy of Sanatan’s Holy text.

Kundalini
Dormant spiritual energy in the subtle-body. It is coiled like a serpent and consists of one central channel and two channels on its sides
Sahasrar-chakra
Notional opening situated at the crown of the head, which leads to realisation of Brahman and Shiv
Kaliyug
Era of strife (The present era, amongst the four eras)