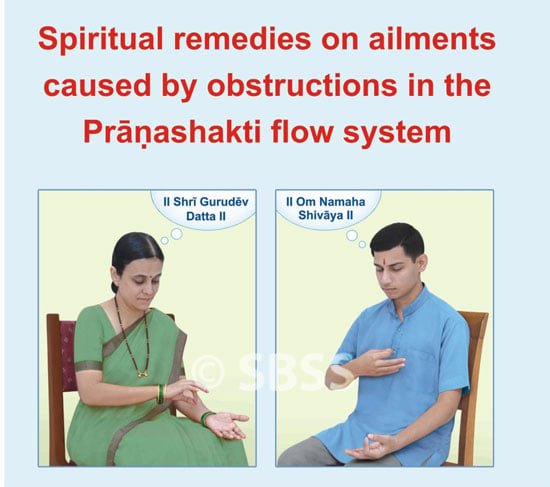 To mankind, Pranashakti (Chetana) is a life-imparting Shakti (Energy). It is used in therapies such as ‘Pyramid therapy’, ‘Reiki treatment’ etc.

In this Holy text too, the science of curing diseases using Pranashakti in specific ways has been elaborated. In this therapy, mudra (A posture for directing the flow of spiritual energy) formed with the fingers and chanting God’s Name are key factors.

Each finger of the human hand represents a Panchamahabhuta – Pruthvi (Absolute Earth), Apa (Absolute Water), Tej (Absolute Fire), Vayu (Absolute Air) and Akash (Absolute Ether). Inform-ation on the fingers and the associated Mahabhuta is taken from the Holy text ‘Sharadatilak’ (Analysis on Chapter 23, Shloka 106) and ‘Swaravidnyan’.

Making a mudra and using it to perform nyas at various Kundalini-chakras (Centres of dormant spiritual energy in the subtle-body) or on different organs, is a part of Prannashakti (Chetana) flow therapy. From ancient times, we have been asked to perform the matruka nyas in Mantrayoga. This involves performing nyas at different organs of the body using the fingers and the palm.

Spirituality is a practical science, that has experimentation as well as creation. Whenever I used the knowledge available in Hindu Dharma, I made it a point to study these aspects curiously. I conducted experiments on the ways of finding obstructions in the flow of Pranashakti, different mudras, nyas and Namjap and had associated experiences. Many  seekers experimented with this therapy. Upon realising its benefits, this was compiled in the form of a Holy text.

We request readers to inform us about their special experiences pertaining to this therapy. God Himself has got this task accomplished; hence, I express gratitude unto His Holy feet.

Essence of the therapy

Various systems such as the circulatory system, respiratory system, digestive system, nervous system function in the human body. Energy required for the functioning of these systems as well as the mind is provided by the flow of Pranashakti. Whenever there are obstructions in the flow of Pranashakti, the ability of the associated organ to function reduces and leads to some ailment of that organ. At such times any amount of medicines from various types of treatment such as Ayurveda, Allopathy will not help much. In such cases, the only remedy is to eliminate the obstr-uction in the flow of Pranashakti, which is discharged through the finger tips. Using this energy to cure our ailments is the essence of this therapy.

Negatives energies that cause distress to individuals frequently change the point of origin of an ailment. At such times, it is not possible to provide accurate treatment to the patient by methods such as Acupressure, in which the pressure point associated with the ailment needs to be pressed. In the Pranashakti flow therapy, the location of the obstruction is identified easily and hence, it is possible to provide accurate treatment.

Methods of treatment such as Acupressure therapy, Reflexology, Pyramid therapy, Magnet therapy will be important for curing diseases, especially during the coming adverse times, when there will be scarcity of normal medical aid. In treatments such as Acupressure, Reflexology advice of experts from these fields is essential. In Pyramid therapy, Magnet therapy special instruments are required. In contrast, Pranashakti flow therapy is self-sufficient to a large extent; for, it needs neither any external help nor any instrument. 1. Finding the obstructions in the flow of
Pranashakti (Finding the spot for the nyas)

1C. Whether there are obstructions at the Kundalini-chakras or not, there could still be obstructions in various nadis (Energy channels). As a result, the associated organs experience distress; for example – feeling breathless. At such times, to find the obstructions in the nadis, move away from the region of the chakras and move the fingers over all the organs such as the head, throat, chest, stomach, ADVThands and feet.

1D. Sometimes upays (Healing) takes place while finding the spot. Due to the upays, there are symptoms of distress (Such as yawning, belching, experiencing distressing sensation on the skin etc.). In such cases, that spot too should be considered suitable for performing nyas.

1E. If you are unable to find the spot using the fingers of the right hand, use the left hand.

Kundalini
Dormant spiritual energy in the subtle-body. It is coiled like a serpent and consists of one central channel and two channels on its sides
Dharma
Righteousness
Chetana
Vitality