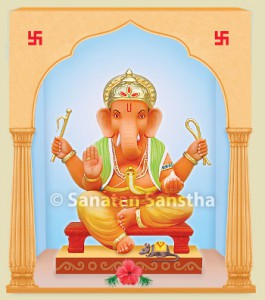 In 1893, Lokmanya Tilak transformed the annual domestic Shri Ganesh festival into a large, well-organised public event to build a new unity between people and generate nationalistic fervour against the British colonial rule.

It is believed that Shri Ganesh bestows His presence on earth to all His devotees during the festival of Shri Ganesh Chaturthi. Shri Ganesh is widely worshipped as the Deity of wisdom, prosperity and good fortune, and traditionally invoked at the beginning of any new venture or at the start of travel.

The destructive and Tama-predominant Yama waves reach the earth in greater proportion during the 120 days from Ashadha Pournima till Kartik Pournima. Their intensity is greater during this period. However, during this period of greater intensity (meaning, from Bhadrapad Shukla Chaturthi to Bhadrapad Shukla Chaturdashi), Ganesh waves too reach the earth in greater proportion. This helps reduce the intensity of the Yama waves.

On Shri Ganesh Chaturthi, as also during the days of Ganeshotsav, Ganesh Principle is 1000 times more active on earth. Worship of Shri Ganesh in this period bestows greater benefits.

In a family, who should celebrate Ganesh Chaturthi ?

The Vrat (Vowed religious observance) undertaken during Shri Ganesh Chaturthi is known as the ‘Siddhivinayak Vrat’. Our scriptures say that ideally it should be performed in all the families.

If all the brothers in a family live together, that is, they have a common treasury and kitchen, they can all worship one Idol. However, if for some reason, the treasury and kitchen are separate, then each should worship Shri Ganesh independently in his own section of the house.