5. Prevent malpractices taking place in the name of Dahikala

6. Significance of the celebration 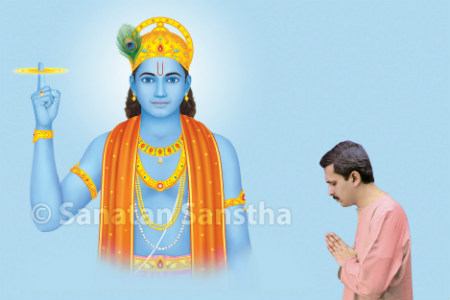 According to the Hindu lunar calendar, Shrikrushna was born on Shravan Krushna paksha Ashtami (Eighth day of the dark fortnight in the month of Shravan) at midnight, when the moon was in Vrushabh formation with the lunar asterism, Rohini.

Five thousand years ago, He incarnated at the end of the third cosmic era, ‘Dwaparyug’ and the beginning of the present era, ‘Kaliyug’.

On this day, also known as Janmashtami (Gokulashtami), the Shrikrushna’s Principle is thousand times more active as compared to other days. On this day, chanting ll Om Namo Bhagavate Vasudevaya ll and worshipping Shrikrushna with bhav (Spiritual emotion) helps in obtaining maximum benefit of His principle. Chanting of His Name invokes His presence within oneself since God and His Name are one. All the qualities that are in Shrikrushna are there in His Name. Thus, repeating His Name will surely herald His presence and blessings in life.

At midnight, the ritual of waving lit lamps is performed. Krushna Jayanti is especially significant from the viewpoint of establishing Righteousness, and surrendering unto Shrikrushna.

Fasting on gokulashtami, as well as doing vrat (Vowed religious observance) on Rushipanchami, reduces the effects of menses, impurity resulting from birth/death in the family and touch, on women. The effects on men are reduced by taking atonement such as tonsuring, and those on premises (vastu) are reduced by performing the ritual of Udakshanti.

Fasting the whole day through, the birth of bal (Infant) Krushna is celebrated at midnight on Shrikrushna Jayanti. At midnight, Arti (the ritual of waving lit lamps) is performed.

His statue is placed on a swing and with devotion, it is offered many sumptuous dishes, in particular kheer (A sweet dish made from milk, sugar and rice or vermicelli) or halva/sheera (A sweet dish made from semolina, ghee and sugar). The fast is also ended by parting this Prasad (Holy sacrament) at midnight or by partaking dahikala (A preparation from curds) the next morning of Gokulashtami.

Temples are decorated for the occasion. Kirtans are sung, bells are rung, the conch is blown, and Sanskrit hymns are recited in praise of Shrikrushna. At Mathura (a city in North India, near the birthplace of Shrikrushna), special spiritual gatherings are organized at this time. Pilgrims from all over India attend these festive gatherings. 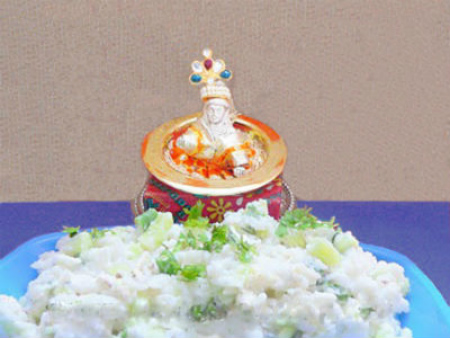 Kala is a mixture of various eatables, curd, milk and butter. When grazing the cattle with the cowherds in Vraj, Shrikrushna mixed the food brought by His companions with His own to make a kala, and ate it with them. In keeping with this story, later it became customary to prepare kala and break a hanging pot of curds on the day after Gokulashtami.

Prevent malpractices taking place in the name of Dahikala on Gokulashtami

Of late, in the name of Dahikala, malpractices such as extortion, obscene dancing, eve-teasing, group of girls breaking handis (Pots) etc. have become very common. Due to these malpractices, the sanctity of the festival is lost. As a result, not only the benefit of the Deity Principle is lost, but severe harm is caused to Dharma. The sanctity of the festival can be retained and it can be beneficial for everyone only if there is an attempt to prevent such malpractices. Preventing such malpractices also amounts to samashti (Serving the society) worship of Shrikrushna.

Contrary to the general thinking that Shrikrushna loved butter, He ate butter or would spill the butter to prevent people from suffering and caving into the unrighteous demands of the evil king Kansa who taxed the people;because, in order to pay their taxes, they were forced to sell butter. In doing so, He taught the people to develop a Kshatravrutti (fighting spirit) and not to tolerate injustice in any capacity.

Significance of the celebration

Prasad
Offering made to God and then distributed to devotees
Kaliyug
Era of strife (The present era, amongst the four eras)
Jayanti
Birth anniversary
Dwaparyug
The third era in the cycle of four eras since the origin of the Universe
Dharma
Righteousness
Arti
A ritual of waving a lit lamp in front of a Deity, accompanied by singing of hymns