Since time immemorial, hair has always been associated with beauty among women. Even in fantasy stories and cartoons, the princess or the most beautiful girl would have the longest hair with shine and luster. We see pictures of female Deities or the cowherd girls of Vrindavan, all with long hair. Nowadays it has turned out to be the reverse. Women prefer keeping their hair short to look modern while men tie ponytails and call themselves trendy. This change in concept has actually taken mankind further down to negativity without realization. Let us find out why do men need to keep their hair short while it is beneficial for women to keep their hair long from a spiritual aspect.

Due to lack of education on Dharma Hindus stopped abiding by achars (Codes of conduct) pertaining to Dharma and traditions or developed indifference towards them. This not only caused harm to Hindus at the cultural level, but caused greater harm at the spiritual level. Nature has provided hair on the human body, not only to enhance the external beauty, but also to imbibe Chaitanya (Divine consciousness) and develop sattvikta in the individual.

1. Growing of hair by men

For men, it is always necessary to have short hair. There are different kinds of men at different spiritual levels. At greater spiritual levels, the length of the hair does not matter. For ascetics, long hair symbolizes detachment, they emit radiant waves, the effect thus being formation of spherical sheath of radiant waves in the environment, which denotes their reduction in body awareness. Due to emission of waves related to Tejtattva (Absolute Fire Principle) from the hair, there is a formation of a protective sheath around the body; thereby protecting the individual from negative energies, thus, no danger is perceived from negative energies while performing spiritual practice. With the passage of time, as the mind develops bhav (Spiritual emotion) of detachment or renunciation, progress in spiritual practice can be attained within shorter time.

For an average individual on the other hand, long hair symbolizes fickleness, there is emission of Raja-Tama waves, thus polluting the environment. This denotes distress due to negative energies. Emission of Raja-Tama predominant waves from the hair forms an environment around body that leads to negative energies getting attracted to the sound emitting from it. As a result, there is a danger of negative energies entering the body through the flow of swiftly emitted Raja-Tama predominant waves. Due to contact with Raja-predominant waves emitting from hair, the suryanadi (Sun channel) remains constantly active; this produces heat in the body which keeps spreading in the body, resulting in reduction in the sperm count.

Man is Shiv-predominant, meaning, he is patient by nature; hence, growing of hair is harmful to his basic nature which leans towards stability.

2. Science in why the Sikhs grow hair

Hair are a symbol of the Raja component. The Raja component is emitted to a great extent if the hair is grown. Several sects, sub-sects etc. came into existence in Hindu Dharma as per the times. The objective in the establishment of the Sikh sect was to make Hindus powerful enough to defend themselves, and to create a warrior community. Hence, the umbilical cord of the Sikh community is connected with Kshatratej (Radiance of a warrior). The hair with Raja component help in creation of kshatravrutti (Combating attitude); hence the tradition of growing hair seems to have become prevalent amongst the Sikhs. (In the earlier times, the hair of kings used to be long. The reason here is the same.) Abiding by traditions in the respective sect is a matter of faith of the followers of the sect. When the tradition is abided by (on the basis of faith), we get its appropriate fruit. As per this rule, it is not inappropriate for the Sikhs to grow hair as a matter of faith in Dharma; however, it will be spiritually beneficial for the Sikhs who do not abide by Dharma to cut their hair.

3. Why should women grow hair? 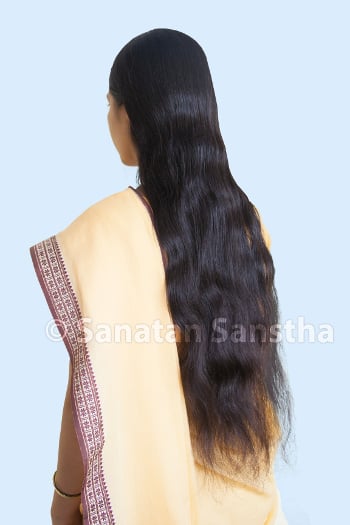 A. Women should keep long hair, since long hair

nurture and complement the activity of the Raja component

A woman symbolises Shakti (Divine Energy). Since a woman is the bestower of Shakti, it becomes possible for her to make use of Tejtattva predominant energy generated in her body by the movement of her long hair, and with the assistance of Raja component, swiftly emit Shakti waves into the environment. These Shakti waves drive out the Raja-Tama components from the atmosphere. As a symbol of this Shaktitattva (Divine Energy Principle)-oriented mission, which is complementary to the activity of the Raja component in the body, a woman should keep long hair. Hindu Dharma stipulates that, ‘A woman should keep her hair long since this action is complementary to her basic nature that is based on Raja component’.

B. The vibrations in the woman’s body in the form

of Shakti tattva always remain in an awakened state

C. Due to Raja-predominant waves

from long hair, women are protected from Patal waves.

When the spiritual level of a woman is less than 50%, she is protected to some extent from waves emitting from Patal (Hell region) due to Raja-predominant waves emitting from her long hair; similarly, even negative energies get distressed due to Tej-bestowing waves; Therefore, if these negative energies attack her out of irritation, the possibility of her suffering from distress is more since she lacks the ability to repel these attacks. By getting protected from distressing vibrations in the atmosphere and the task attaining momentum due to emission of the Raja component, the fruitfulness of the task increases, which in turn has a positive effect on the surrounding atmosphere and leads to perception of enthusiasm in the atmosphere

D. It is possible to remain free from the attacks of negative energies

1. Movement of the long hair generates vibrations in the form of Tejtattva (Absolute Fire Principle). These vibrations can congregate in the voids of long hair for prolonged periods. These vibrations related to Tej tattva cause timely disintegration of the Raja-Tama-predominant waves entering through the hair and destroy them. As a result, the body can remain free from the attacks of negative energies.

2. The ability of long hair to imbibe and emit Shakti tattva-predominant waves is greater; hence, in a way, a woman with long hair is protected from the attacks of negative energies.

3. The currents of Kriya-shakti and Shakti tattva that flow from the long hair downwards in the direction of the earth prevent the distressing vibrations emitting from Patal (Hell region) from entering the body or create obstacles in this process.’

achars
Conduct conforming to Shruti and Smruti, general conduct
Tama
One of the three components in the Universe denoting inertia and ignorance
Kriya-shakti
Energy of Action
Dharma
Righteousness