Guru-Disciple tradition is a feature that sets Bharat apart from the rest of the world. This is our cultural heritage. The Guru guides His disciple spiritually and takes him upto discipleship and later, helps him attain Moksha (Final liberation). 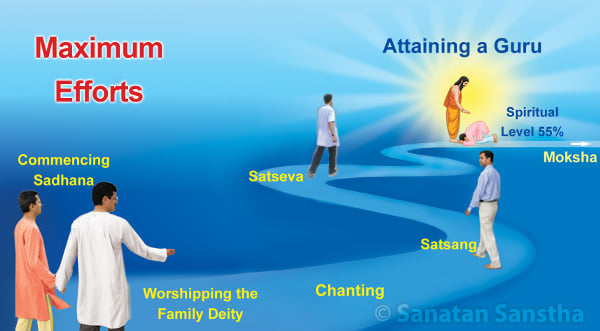 1. He who dispels a disciple’s ignorance, advises him to perform sadhana (Spiritual practice) and gets sadhana done through him so that he makes spiritual progress and bestows spiritual experiences upon him, is termed as Guru. Guru does not pay attention to the worldly happiness of His disciple (as this depends on his destiny). The Guru is attentive only to the disciple’s spiritual evolution.

2. The energy of the Supreme God to initiate (in sadhana) is the Guru.

3. Guru is the one who is not small, yet transforms the small into a large one (a Guru).

4. In the second chapter of the Holy text Sri Gurucharitra, the Guru has been called Vedadharma. Therefore, Vedadharma confers the status of Sadguru to only Him whose physical, verbal and psychological activities are harmonious with Vedas.

Saints do provide a little guidance for gaining some worldly and spiritual benefits. Some Saints work towards eliminating worldly problems of the people as well as their unhappiness due to distress from negative energies. This is the task of these Saints. When a Saint accepts someone as His disciple, He becomes the Guru for that disciple. A Guru provides complete guidance only for non-worldly matter, that is, attaining God. When a Saint functions as a Guru, He gradually loses interest in providing guidance for solving worldly problems of those who visit Him and later, such guidance ceases completely.

However, when He accepts someone as His disciple, He takes all-round care of that disciple. Every Guru is a Saint, but vice-versa is not true. Even then, most of the features of a Saint are also applicable to a Guru.

A Guru progresses faster than a Saint after a spiritual level of 70%. He reaches the next levels of 80% (Sadguru) and 90% (Paratpar Guru) respectively, earlier than a Saint would. The reason is that a Guru is always engrossed in His mission, that of spiritual progress of His disciple, while a Saint performs some worldly actions for the benefit of His devotees.

The unmanifest Guru pervades the entire Universe and is with us at all times during our life and even after we die. The salient and highlighting feature is that the unmanifest Guru stands by us throughout our life and slowly lifts us from our worldly life into a spiritual way of life. The Guru helps us develop skills such as perseverance, dedication, attention to detail, tenacity, compassion etc. through our lives.

What are the qualities in a Guru ?

2. Having a yearning to impart spiritual knowledge to a disciple

3. Teaching only a disciple who will obey instructions

4. Teaching stepwise, based on a disciple’s spiritual level

8. Teaching with a positive attitude

9. Having equanimity towards all disciples

12. Having the ability to get sadhana performed by the disciple

13. One without any expectation of receiving any Gurudakshina

14. Having a pure sattvik (Sattva-predominant) ego

Who is a Guru, Sadguru and a Paratpar Guru ?