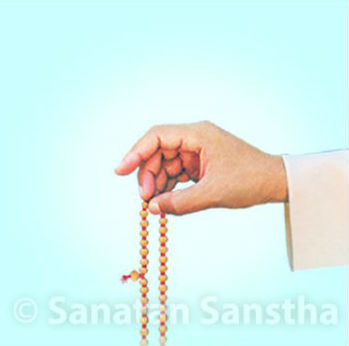 Though the word Gurumantra contains the word ‘mantra’, it mostly implies to which Name of God a disciple should chant. One should chant the Name recommended by the Guru rather than chanting the Name of one’s favourite Deity for the following reasons :

1. One does not understand which Name is best suited for one’s own spiritual progress. Only the Guru is capable of providing this guidance.

2. Chanting the Name of the favourite Deity helps only to raise one’s sattvikta. The Gurumantra however, can take one to the nirgun state.

3. The Gurumantra does not contain mere letters, but has spiritual knowledge, Chaitanya and the Guru’s blessings. Hence, spiritual progress is faster.

4. Due to faith in the Guru, one chants the Gurumantra with greater faith, than chanting the mantra decided upon by oneself. Also, when remembering the Guru, one tends to chant the Name given by Him and thus chanting increases.

5. When one chants the Name of the favourite Deity, at least some amount of ego accompanies it. On the contrary, when chanting the Name recommended by the Guru, there is no ego.

Many people have the following misconcepts about Gurumantra. The reason for devel­opment of these misconcepts is because people are unfamiliar with spiritual terminology.

1. H.H. Bhaktaraj Maharaj (Fondly called Baba – Seat of Faith for Sanatan Sanstha) would often tell people, “Chant Hari Om Tatsat”. Then, they would begin to feel that they have been initiated with a Guruman­tra by Baba. However, the implied meaning of this is “Chant God’s Name”.

2. On Gurupournima day, Baba would impart Gurumantra at the insistence of His disciples. Those mantras were not real Gurumantras.

3. When a seeker is initiated with a Gurumantra, he becomes a disciple. However, when the discipleship is namesake, how can the Gurumantra be real ? Baba says, “When the disciple is not seri­ous, the Guru too is not !” However, since most of them are unable to understand this, they consider themselves as disciples of Baba.

4. Since Baba would refer to those who merely pay their respects to Him as well as seekers as devotees or disciples, many were convinced that they were Baba’s disciples. Since Baba views everyone with equanimity, He does not get thoughts like ‘He is My disciple’ and ‘He is not My disciple’. As a result, He calls everyone His disciple.

Only one who has intense desire for Moksha or for being blessed by a Guru and intense motivation to obtain His grace, is initiated with a Gurumantra. (If the spiritual level of an ordinary individual is considered to be 20% and that of one who has attained Moksha as 100%, then an ordinary individual is not at all inter­ested in Spirituality. One with 30% spiritual level worships Deities ritualistically, recites shlokas and goes to temples. At 40% he is able to chant. At 50% he does seva, at 60%, sacrifice commences in the real sense. At 55% he is blessed by a Guru and is initiated with a Gurumantra.

In short, only when interest in Spirituality exceeds 50% does a Saint behave as a Guru with that seeker. Only when one sacrifices more than 55% of the body, mind and wealth for Spirituality does one receive a Gurumantra. Hence, despite remaining in the Guru’s company for many years, people are not initiated with a Gurumantra because they have not attained the required spiritual level.

Shlokas
Specifically denotes a metered and often rhymed poetic verse or phrase. Shlokas are usually part of stotras which are prayers to the Deities.
seva
Service unto the Absolute Truth, that is, God Principle
mantra
A syllable or words representing spiritual reality or an aspect of God uttered to protect oneself or to achieve a specific goal