Chanting God’s Name helps in alleviating physical and psychological ailments, increasing concentration, reducing sorrow, nullifying all sins, and is useful even after death. Many of us may be unaware of this fact, hence turn to other ways to overcome our problems. In this article we will find out the various advantages that chanting God’s Name can have from a physical as well as psychological point of view.

A. Adverse effects of drinking alcohol and benefits of chanting God’s Name

Nowadays, many people drink to forget their sorrows. However, drinking is not the way to forget sorrows. How chanting is appropriate for overcoming sorrows will be evident from the following comparison.

6. Drinking makes man perverse; whereas, chanting makes him like God.

B. Offering merits from chanting to fulfil someone else’s task

‘A man ritualistically offered ten million chants to his friend for fulfilling an important task. The task was fulfilled.’

A. Due to chanting, symptoms of a disease are visible before the disease sets in

The distress from a disease due to physical, psychological or spiritual reasons becomes evident only when its presence becomes 30%. Then, it manifests physically or psychologically. Owing to chanting, we come to know of the disease even before the signs start showing. If distress is likely to take place in future, or presently if the distress is not evident, then with chanting, the distress starts showing in the form of physical or psychological problems. This is because the organs that get affected by the disease receive positive waves from chanting. Even doctors are unable to diagnose the disease unless the problem is 30%. Whereas, if the problem is 10-30% that is, if someone has a psychiatric problem, then due to chanting it is detected.

B. Physical benefit due to mental stability

Psychosomatic diseases, which take place due to mental stress, do not take place because of chanting.

1. When there is fluid overload (Hypervolemia) leading to renal dysfunction, cough or swelling of the body, then the individual should chant the Name of Suryadevata (Sun Deity). This generates heat, which gets directed to the diseased organs and helps reduce the fluid.

2. An individual who is short tempered or mentally stressed should chant ‘Shri Chandraya Namaha’, that is, the Name of the Moon Deity to cool down.

3. For hypertension, ‘Shri Mangalaya Namaha’, that is, the Name of Deity Mangal or Moon Deity.

4. For arthritis, Gayatri mantra helps. If a patient is unable to recite by himself, his relative or a priest can recite for him. If one is unable to chant due to illness, then his relatives, teacher or priest should chant for him.

D. Individual on death bed recovers when we offer the merit of chanting

‘The wife of a rich man was seriously ill. The doctors had given up hope after giving her the best of treatment. The man met a friend of his who was religious and informed him of his wife’s condition. The friend offered ten million of his chants (through the ritual of pouring water on the man’s hand) to the friend’s wife. A week later, she improved and eventually recovered completely. Even the doctors treating her were amazed. This shows the power of God’s Name.

E. Chanting is the only cure for all diseases

Someone asked H.H. Kane Maharaj, “I have a lot of physical distress. What should I do?”. H.H. Kane Maharaj replied, “Chanting is the only cure for all diseases. Keep chanting and die whilst chanting”.

Being inclined towards desires amounts to sinning. Till the individual seeks materialistic pleasure, he obtains sorrow. With the realisation that we are the blissful self, the desire to acquire happiness is over, sorrows are over and one obtains bliss. In order to do this, we should chant.’ – H.H. Kane Maharaj, Narayangaon, District Pune, Maharashtra.

A human being has two bodies – The gross and the subtle-body. Gross body is the physically visible body. The subtle-body has 19 constituents, namely – five subtle sense organs, five subtle motor organs, five vital energies, conscious mind, subconscious mind, intellect and ego. The five vital energies provide energy for the functioning of all their components. The subconscious mind has various centres such as identification and interpretation centre, give-and-take account centre, the desire and instinct centre, likes and dislike centre, the temperamental characteristic centre etc. 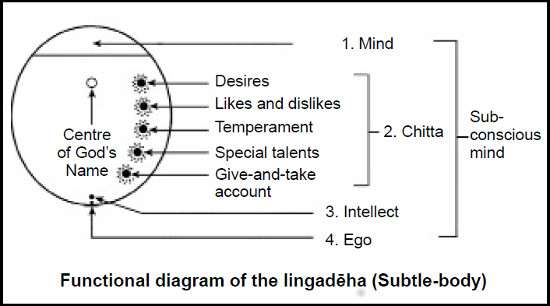 A. Chanting as a therapy in psychiatric illnesses

Chanting is beneficial in majority of psychiatric illnesses. Chanting God’s Name is perhaps one of the most effective therapies in the treatment of ‘obsessive compulsive disorder’.

B. Developing introversion and introspection through chanting

Introversion as well as introspection are necessary to imbibe positive qualities within ourselves. Both these qualities start developing as the process of chanting continues. Chanting in the true sense commences only when we try to focus on becoming introverted. If we wish to observe whether chanting is going on in the mind, we need to become introverted. The mind wanders due to its inherent nature and hence, does not focus on chanting for long. Once we realise this, we should try to bring the mind back to chanting. In this process, we become aware of the thoughts or defects, which had prompted the mind to wander. This is termed as introspection.

C. Increase in concentration through chanting

How a child seeker experienced increase in concentration has been highlighted ahead. Studying improved due to the concentration brought about by chanting: ‘In the moral value classes of Sanatan Sanstha I was taught how to chant, which Name I should chant, its benefits etc. After I returned home, I started chanting. Even when my uncle switched on the television, I was not distracted. I could concentrate on my studies very well.’ – Ms. Shweta Dilip Parthey, Wadala, Mumbai

D. Benefits are similar to those obtained from moun (A state of being quiet, silence)

Chanting God’s Name is a type of moun. Hence, the psychological benefits of moun listed ahead also take place with chanting.

2. We can avoid speaking lies.

3. Control over the shadripus (Six internal foes): When emotions such as anger etc. are not expressed, we gradually gain control over them.