1. Automatic movement of the mirror in H.H. Dr Athavale’s room

In October 2012, it was seen that the mirror (weighing 2.5 kgs.) hanging above the basin in H.H. Dr. Athavale’s room is moving sideways or back and forth.

A. Movement of other objects too in H.H. Dr. Athavale’s room

If an empty bottle is kept on the ground in His room, it shakes. At a certain place, it shakes and falls down. A peacock feather kept in a vertical position also shakes on its own. The floor tiles in His room have also become smooth.

It was realised that all this was happening because of the activation of the Vayutattva (Absolute Air Principle) in His room. – Mrs. Anjali Gadgil (Sanatan Ashram, Ramnathi, Goa)

Performing sadhana (Spiritual practice) means making efforts for God-realisation, which in turn means efforts to become one with God by imbibing Divine attributes.

Attaining sainthood means attaining a stage on a spiritual journey to unite with God. As a result, some extent of Godliness gets imbibed by the body; and hence, the articles used by Saints and touched by them become Sattva-predominant and undergo positive changes. This is why, these articles are traditionally preserved as invaluable treasures.

Since Saints understand the subtle dimension, they can accurately assess the vibrations in any object/article. The seekers take the word of Saints as the Absolute Truth and have faith in them.

However, rationalists need direct proof and not a ‘word of spiritual authority’. They take any aspect to be true only if it is proved scientifically with the help of some equipment or machine.

Tests were conducted through ‘RFI’ (Resonant Field Imaging) and ‘PIP’ (Polycontrast Interference Photography) technology on the mirror in H.H. Dr Athavale’s room to scientifically verify the nature of vibrations emitting from it. Observations and interpretations are given ahead.

With the help of ‘RFI’ reading equipment, universal energy in the environment can be measured. With the help of ‘PIP’ technology, we can understand the momentum of vibrations around an object and can also see the colour aura around it.

By connecting computerised PIP equipment to a video camera, the circles of energy associated with the objects, buildings or individuals can be observed through filters in the PIP equipment.

This equipment separates the colours and has facilities to observe positive and negative colours as per their concentration. As per the ‘PIP’ technology, orange and violet represent vibrations of tension or distress respectively. Pink denotes Raja-predominance. Green signifies positive energy associated with spiritual remedies; blue denotes sattvikta or Anand (Bliss). Yellow with a golden tinge signifies high level of universal vibrations.

5. Observations and their interpretation

A. ‘RFI’ reading and its interpretation

2. RFI reading of the mirror where it is hanging in H.H. Dr. Athavale’s room

The frequency at this place was 525 MHz. Its colour was golden, which denotes a high level in Spirituality.

It can be understood from these observations that because of H.H. Dr Athavale’s presence, the mirror became sattvik (Sattva-predominant).

B. Description of the aura through ‘PIP’ technology and its interpretation 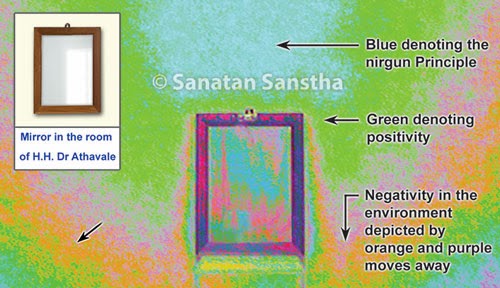 Image of Mirror through PIP

The rings emitted by the mirror are very pleasant. When the mirror was taken for testing, the surrounding rings were first orange (denoting negativity and mental stress); however, since the mirror has a positive aura, it eliminated the negativity in the environment.

The swiftly moving positive green and the sky-blue (denoting a high spiritual level) to some extent were visible in the aura around the mirror. These rings drove away the negative rings. (Mr. Santosh Joshi [Researcher of Universal Energy, Sarvashram Universal Spiritual Energy Research Centre, Dombivli] made these observations in April 2012.)

6. Spiritual science underlying the movement
of the mirror in H.H. Dr. Athavale’s room and its benefit

A. Mirror gaining momentum by mere touch of Vayutattva

In the movement of the mirror, the Vayutattva merely touches the object, which means the tattva (Principle) pushes the object. In such a situation, the Chaitanya (Divine consciousness) in the form of Vayutattva functions for a moment and then disappears into the environment.
– A Scholar (15.4.2013) (Sanatan’s Saint, H.H. (Mrs.) Anjali Gadgil, writes under the pseudonym of ‘A Scholar’. – Editor)

B. Chaitanya in the form of Vayutattva being emitted by the movement
of the mirror is complementary to the spiritual progress of the society

When the mirror moves, the proportion of activation of the Vayutattva in the environment becomes 70% due to influence of the nirgun (Non-materialised) state.

Thus, when the nirgun comes in contact with an object, the Pruthvitattva (Absolute Earth Principle) in the object discards its characteristic, which means it goes beyond the limitations of place. While functioning without restrictions, the mirror is not aware of its weight. In other words, the inertia of the mirror cannot prevent the momentum of the task; because the nirgun touch of Vayutattva is assimilated in the Chaitanya.

Since the Chaitanya (which is created and emitted as a result of the movement of the inert mirror) is of a higher tattva in respect of the proportion and influence, it is beneficial for the progress of the society. In other words, it goes beyond the limitations of place and time, discards its inertia and continues to function.

7. Difference of the earlier and present movement of the
mirror in H.H. Dr Athavale’s room from the perspective of the task

In October 2012, the mirror’s movement indicated the creation (or commencement) of Chaitanya-enriched Vayutattva in H.H. Dr. Athavale’s room. God showed this through the medium of a hanging object.

When the Vayutattva comes in contact with an object to the extent of 70%, the object discards its Pruthvitattva, that is, discards its characteristic of heaviness or inertia.

When the mirror was moving earlier, 70% Chaitanya of Vayutattva was created. Hence, this tattva could take away the weight of the inert object. In other words, it took the object beyond the limitation of place. Hence, a 2.5 kilogram heavy mirror could also move. This is what the easy movement of the mirror proved through this example.

In reality too, if the object is weighed, its weight is noticed reducing partially. However, it is difficult to measure this difference precisely because the change is mostly internal from the tattva point of view, and hence, it is very subtle. However, for showing the effect, it is very significant.

Once the object gains momentum of the Chaitanya-bestowing Vayutattva, the seed of impressions gets sown in the object; then God uses it for the welfare of the universe.

The object moves when the need arises and thus indicates its participation or activeness in the battle of Dharma (Righteousness) and adharma (Unrighteousness). To depict this aspect, there is consistency in the movement of the mirror.

Who is truly progressive ?

Sanatan’s seekers have been experiencing various inexplicable good and bad events in their spiritual journey over the past 12-15 years. Sanatan Sanstha has been conducting research on these events. The underlying spiritual reasons of the events can be enumerated by Saints; however, the help of scientists will be valuable to understand the scientific reasons. We will be grateful if scientists come forward and help in researching these events from the scientific perspective.