1. The reason men and women whose spiritual level is less than 50% should prefix the Name with ‘Shri’ instead of ‘Om’

The vibrations produced during chanting of ‘Om’ generate a lot of energy (heat) in the body. In the present era of strife, the average spiritual level of a person is mere 20% . Those with spiritual level less than 50% do not possess the capacity to sustain the sattvik and Absolute Fire Principle oriented Shakti of ‘Om’. Hence, if such people chant the Name by prefixing ‘Om’ they are likely to suffer from distress like headache, burning sensation in the eyes and skin etc.

Hence, men and women below the spiritual level of 50% should not prefix ‘Om’ to the Name they chant. For example – Instead of chanting ‘Om Namaha Shivaya’ they must chant only ‘Namaha Shivaya’. Normally prefix ‘Shri’ to other Names. If the Name is recommended by the Guru then the power of resolve of the Guru that is active takes care of the distress and one does not suffer even if the Name is prefixed with ‘Om’. One cannot make out whether one’s spiritual level is above 50% or not. Only Saints and those who can perceive the subtle can identify one’s spiritual level. It is best that one chants the Name by prefixing ‘Shri’ till such time as one comes across someone who can say so.

2. The rule to be followed by those whose thread ceremony is done about prefixing ‘Om’ to the Name they chant

2. Rules for using the japamala

A. One should not cross the ‘merumani’ 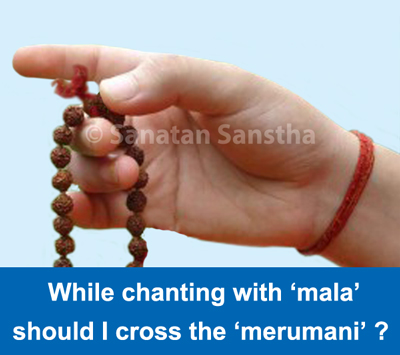 Why does one reverse the mala after reaching the merumani (Central bead) ?

To forget the act of chanting ! When compared with functioning of the Ida-nadi or the Pingala-nadi, functioning of the Sushumna-nadi is very important for a seeker’s spiritual progress. For the same reason, it is incorrect for a seeker to draw the beads of the mala only in one direction. The Sushumna-nadi lies between the Ida and Pingala nadis. Likewise, the merumani lies between the opposite directional rotations of the mala. If one crosses the merumani by mistake, one should practise pranayam six times as penance.

B. The beads of the mala should be drawn toward oneself

C. According to the objective

Chanting is done with the mala held in the right hand in the following manner :

1. The mala should be placed on the middle joint of the middle finger and the beads should be drawn with the thumb toward the self. The index finger should not touch the mala.