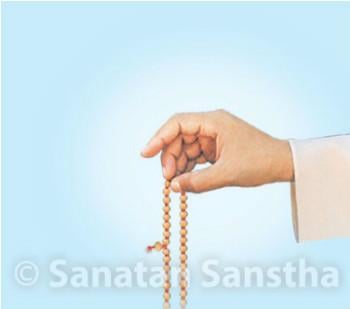 A. Derivation and meaning

Meaning : chanting (Japa ) is that which destroys sins and liberates one from the cycles of birth and death.

2. Chanting means repetition of a letter, word, mantra or sentence.

3. Importance of chanting the Name

A. Chanting is necessary to reduce the attraction towards Great Illusion

It is being often said that, in Kaliyug, renouncing the family to attain God is not necessary. The family life cannot be bad, for it is the creation of the all too powerful God Himself. It’s the attachment to the family life that is bad, for it is binding and the root cause of the cycles of birth-death. Not only this, we have to shift the nucleus of our worldly desires from relations like father, son or materialistic desires like wealth etc. and make the supreme God the nucleus of our desires. This is easily achieved by chanting.

B. Blending with the Name is more important
than wasting one’s spiritual practice in opposing the factors of Prakruti 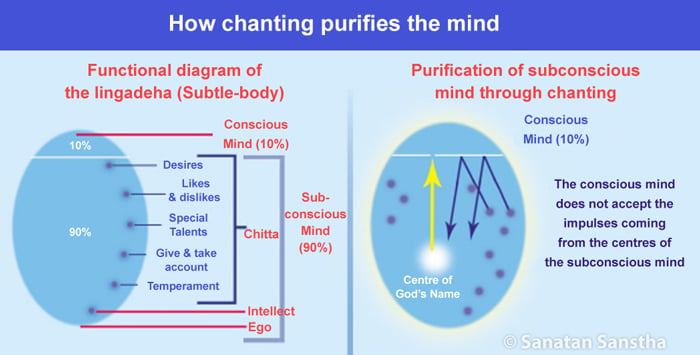 The subconscious mind carries millions of impressions. To erase even a single impression would take a very long time. Thus, if one were to practice moral virtues and observe restraints, a considerable period would be wasted in overcoming the tendencies of the subconscious mind. It is much more important to make continual efforts to blend with the ‘Purush’, rather than to try and erase impressions which arise from ‘Prakruti’. This is precisely what can be achieved by chanting a Deity’s Name. The mind, intellect, subconscious mind, etc. are all constituents of Prakruti and they function according to their own characteristics. Instead of wasting one’s spiritual practice in resisting them, one would achieve the goal faster if the spiritual practice is utilised to progress toward God, that is to become one with the Name (of God) that one chants. – H.H. Bhaktaraj Maharaj

C. The Name of God is more important than His appearance

While chanting the Name of God if God Himself poses physically in front and asks, ‘What do you want ?’ and to that if the reply is ‘give me Your Name alone’, then that would be called nishkamata. God who has appeared in physical form is indeed going to disappear sometime; but His Name will last forever and whenever His Name is uttered, He will have to be present by the Name.

D. A spiritual practice that is convenient to all

Fire sacrifice, an offering, ritualistic bath, chanting a mantra etc. can be carried out only during specific Holy times and require purification of worshipper, place etc. However chanting the Name of the Deity is independent of all these requirements and has no restrictions of place and time, shuchitvaashuchitva or sovale-ovale.

E. The Deity’s Name is saviour of the honest as well as sinners

All the people sitting in a train, whether having first class or second class tickets or those travelling without ticket, if they do not disembark the train midway, then they all make it to their destination. Likewise, those who chant the Name, whether honest (one’s with ticket) or sinners, cruel and dishonest (one’s without ticket), all attain moksha if they do not give up chanting midway. Not to give up chanting the Name is most important.

A. According to the faculty

Writing the Deity’s Name with one’s own hand.

a. Chanting the Name occurs through three mediums – the hands, the eyes and the mind.

b. Mind does not go astray while the chanting is going on.

c. When the note books with the chant written on them are kept in the house, they help purify and maintain the purity of the house.

B. According to the mode of speech

a. Benefits to oneself

1. For a seeker in the primary stage, chanting aloud facilitates concentration.

2. One also derives the benefits of Pranayam.

b. Possible benefits to others

1. Helps generate sattvik spiritual emotion in the minds of those who hear the chanting.

c. Possible distress to others

Can disturb their thoughts and hinder their spiritual practice.

The mind cannot attain a thoughtless state because of loud chanting.

It is a stage where chanting is automatic. Madhyama means middle. It is the intermediate stage between the Vaikhari and Pashyanti modes of speech.

Pashyanti is derived from the root ‘pashya’. It means ‘to see’. Chanting akin to that of the Sages who can visualise the past, present and the future is called Pashyanti.

This itself is referred to as Omkar or adibij (The primordial seed). In the Para mode of speech, chanting ceases to exist since non-duality is achieved with the chanting.