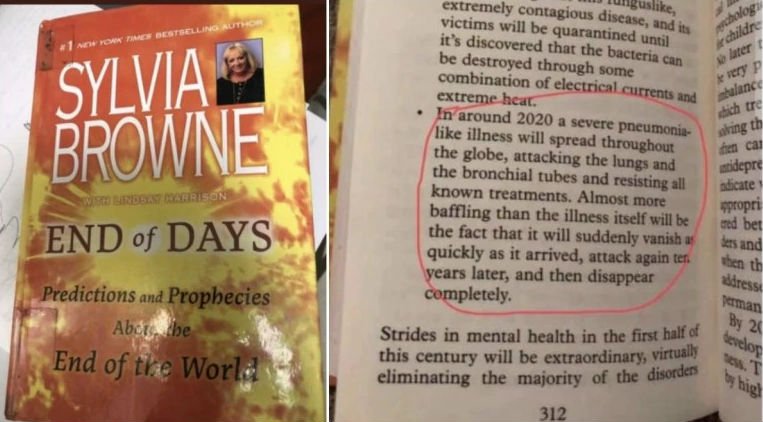 BEIJING – Author Sylvia Brown had predicted in her book, written almost 12 years in 2008, titled ‘End of Days: Predictions and Prophecies About the End of the World’ that an epidemic of severe pneumonia-like illnesses could spread worldwide by 2020. She had also mentioned in the book that the infection will suddenly vanish as quickly as it arrived. Importantly, the symptoms of the disease described in the book by Sylvia Brown are like the ones of the ‘Corona’ infection currently spreading from China to the rest of the world. Corona infection has been on the rise since the early 2020.

Even before that, 40 years ago, Dean Kontoz’s book, ‘The Eyes of Darkness’, published in the year 1981 had mentioned the Wuhan-400 virus.

465 years ago, the ‘Corona’ virus
epidemic was foretold by French astrologer Nostradamus!

What do the so-called progressives, the
intellectuals, who term astrology as fake, have to say about this?

French astrologer Nostradamus had predicted the occurrence of corona virus in the future. Marco Malakara, a foreign national has tweeted, “Global crisis such as severe floods, events of fire and Corona virus will occur in future.” In this tweet, he has further mentioned that epidemic has stepped into the 21st century. This event is one of the prophecies of Nostradamus. We are very close to death.