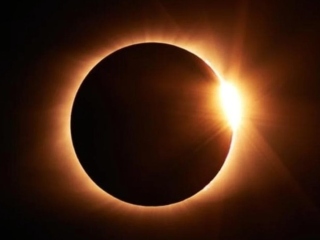 New Delhi – The year’s first solar eclipse took place on the 10th of June and earlier there was a lunar eclipse last month. In India, both the eclipse were partially visible in some parts of Arunachal Pradesh and Kashmir. The day of the solar eclipse was special in many ways as it was ‘Jyeshtha’ Amavasya, Shani Jayanti. As per predictions of Pandit Kamal Nandlal aired on ‘Aaj Tak’ TV Channel, there is a probability of events such as war and fire in the world.

Predictions made by Pandit Kamal Nandlal

1. Since the lunar eclipse was visible in Arunachal Pradesh and Kashmir in India and now the solar eclipse also happened there, it shows a possibility of upheaval. In Arunachal Pradesh, Assam, Nagaland, Kashmir and Punjab may have to face a crisis. such as infiltration or border unrest within the next 45-90 days. The world may experience earthquake also.

2. Both the lunar and solar eclipse were visible in China and the US. Looking at the situation, within the next 45 to 90 days a war-like situation can arise between the two nations. The tense situation of war is apparent in the world. According to astrology, Israel may go through war again.