‘H.H. Gurunath Dabholkar without any external features of a Saint attains the position of a Guru. It is rather difficult for most people to grasp this. He has set a great example to seekers. I am sure he will make fast spiritual progress.’ – Paratpar Guru (Dr.) Athavale 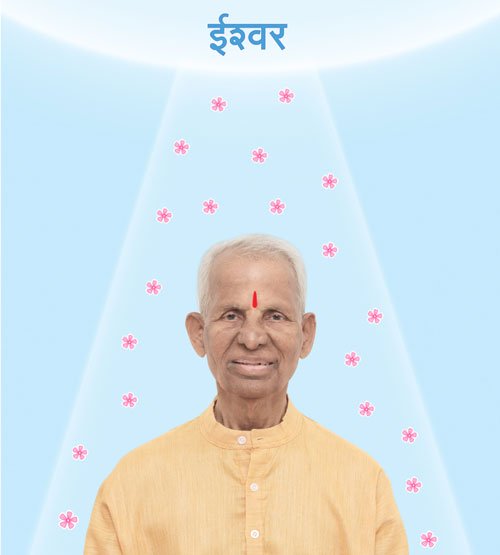 ‘I was born on 15.2.1940 (Magh shukla paksha saptami – 7th day of the bright fortnight of the Hindu lunar calendar in the month of Magh) also called Rathasaptami at Malewad (Sawantwadi Taluka, Sindhudurg District). Since childhood my home environment was spiritually conducive.

1 A. On narration of my prediction about my paternal
uncle’s visit to our place from Mumbai coming true, to Paratpar Guru
(Dr.) Athavale, His saying that this was a result of cumulative merits from past births

When I was 5 years old once when my grandmother and mother were making chapatis at night I told them that my paternal uncle would be arriving from Mumbai soon. They both took it jokingly but my uncle really arrived at midnight.

When I narrated this incident to Paratpar Guru (Dr.) Athavale He said that I had been able to predict it correctly due to my cumulative merits from past births.

1 B. At the age of 14 constantly feeling that I should
go to some place of pilgrimage instead of living in this material world

At the age of 14 I would constantly feel like leaving home and going to some place of pilgrimage, a religious or unknown place. I would repeatedly confide about this in a boy 12 years younger than me but whose views matched mine, from my neighbourhood.

1 C. Once a man in whom the Devi would
materialise had predicted that I would rise later in life

2. Spiritual practice for the sake of society

A. Ever since I understood spiritual practice I began to tell all visitors about chanting. In fact initially when travelling by bus I would often sit next to a person whom I felt was inclined to religion and gradually broach the topic of spiritual practice.

B. As part of spread of Spirituality I would put up a Holy text exhibition, distribute ‘Sanatan Prabhat’ and render seva for public meetings of Paratpar Guru (Dr.) Athavale.

C. With full-time spiritual practice I rendered seva at the reception counter of the Kudal sevakendra.

Ever since I commenced spiritual practice I was of the opinion that I should render that seva wholeheartedly and to accomplish that time was never a barrier.

4. Spiritual emotion unto the Guru

Till today I have the spiritual emotion that no matter what happens the Guru will take care of it and will get everything done. I followed all guidance that Paratpar Guru (Dr.) Athavale gave step by step.

Once I said to Paratpar Guru (Dr.) Athavale, “When I attend the bhavsatsang I cannot grasp anything that the seekers are explaining” upon which He replied, “You do not need to attend this satsang, why move backwards ?”

Once when in the Devad ashram as I was conversing with Miss Vatsala Revankar on phone she requested that I come to meet seekers in Mumbai. I was puzzled with her request as I felt that no seekers there knew me. She then revealed to me that wherever Paratpar Guru (Dr.) Athavale had conducted satsang He has mentioned that He had gone to spread Spirituality in Sindhudurg only for me. This made me weep. Even today when I recollect this incident I feel overwhelmed.

7. In the Devad ashram being blessed with
the opportunity of serving Paratpar Guru Pande Maharaj

I came to the Devad ashram in 2003 and within a few years was blessed with the opportunity of serving Paratpar Guru Pande Maharaj so was able to remain in His Holy company perpetually.

9. With the grace of Paratpar Guru (Dr.)
Athavale  my family too was taken care of in all ways

Despite not having a flair for writing I would get thoughts on spiritual practice, nation, Dharma etc spontaneously.

11. Positive changes in the photograph
of Paratpar Guru (Dr.) Athavale in my presence

A. In 2017 a photograph of Paratpar Guru (Dr.) Athavale which I worship in my room, had become pink.

B. I have a photograph of Paratpar Guru (Dr.) Athavale in my bag which He Himself had gifted me. That too is becoming pink.

C. Seekers visiting my room tell me that the photograph of Paratpar Guru (Dr.) Athavale which I worship has changed.

I am incapable of expressing gratitude for my spiritual journey till date, in fact I am bereft of words to express it.’

‘H.H. Dabholkarkaka’s loving smile gives us seekers a lot of bliss. His love for seekers is immeasurable. His worrying about our spiritual practice is very inspiring.’

seva
Service unto the Absolute Truth, that is, God Principle
Satsang
Company of the God Principle
Dharma
Righteousness
Ashram
A place where a seeker can remain engrossed in spiritual practice through spiritual discipline