A unique feature of Sanatan Hindu Dharma is the deep thinking behind acquisition of Chaitanya (Divine consciousness) through every action in human life. When we follow the Code of Conduct pertaining to the ritual of attire as mentioned in the Hindu Dharma, such as applying kumkum (Vermillion) or tilak (Mark on the forehead using various objects), we move further on the path of sattvikta (Purity) through our gross body.

1. Why should we apply tilak
of kumkum before the commencement of a Puja ? 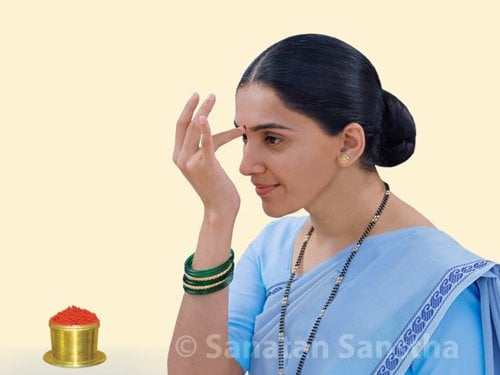 Applying a tilak of kumkum before the Puja attracts Chaitanya from the Universe towards the pujak in a shorter time. This activates the bhav and the nadi (Channel) required for carrying out the actions in duality. Kumkum has an inherent property of attracting Sattvik frequencies. When the pujak invokes the Deities by applying tilak of kumkum on his Adnya-chakra before the commencement of the Puja, the Chaitanya present in the Universe gets attracted to the pujak in a shorter time. This activates the bhav faster and the pujak gets the benefit of Chaitanya generated in the Puja to the maximum extent. The Chaitanya received through the Adnya-chakra activates the nadi necessary for his actions in duality and makes the required amount of Chaitanya available to him.

2. Applying of kumkum activates
the Atmashakti (Energy of the Soul) of a woman

Kumkum has a tremendous potential to attract tarak (Saviour) and marak (Destroyer) energy Principles. If the Atmashakti of a woman gets activated, she also develops tremendous potential to attract tarak and marak Principles of Shakti. With the intention of seeking the blessings of the Goddess Principle, when a woman herself or some other woman applies kumkum to her mid-brow region, the tarak Shakti Principle vibrations in that woman get activated and most subtle particles of Energy Principle get attracted towards her.

3. Why should women apply kumkum in a round shape ?

The woman is symbol of Shakti. The woman applies the red kumkum in a round shape. The individual in the form of a woman worships the Divine mother Sri Durga Principle present in her through the medium of kumkum she applies. Applying of the red and round kumkum by women is akin to worshiping the Energy form Principle within themselves. It is because of the round shape of kumkum, that the energy keeps revolving at the same place and manifests through the center-point as per the need.

4. Why should men apply tilak of kumkum vertically ?

5. Should bhasma be applied on the tilak of kumkum ? 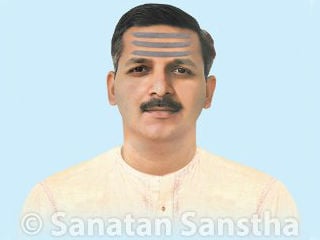 Once the spiritual progress occurs at the level of the Atmashakti, the individual gets strength to bear the Tej-tattva (Absolute Fire Principle) present in the bhasma. Otherwise, it is likely that due to the application of bhasma, a seeker in the initial stage of Sadhana (Spiritual practice) can become restless and dull while performing the Puja. Therefore, it is better for an ordinary individual to apply tilak of kumkum instead of bhasma.

Applying kumkum activates the bhav of devotion in a pujak and he receives God’s sagun (Materialised) frequencies; while, applying bhasma activates his bhav of detachment and he gets the strength of God’s nirgun (Non-materialised) frequencies. Thus, during Puja the individual gets satisfied due to pure Bliss of Chaitanya generated because of the sagun and nirgun-tattvas.

6. Applying of haldi powder and kumkum as tilak, by a woman

Applying of haldi powder increases the proportion of Sattva and Raja particles in pranamay (Vital energy sheath) and Manomay-kosh (Mental sheath). By applying haldi powder, frequencies of Sri Ganesh Principle present in the Universe and those of earth get attracted towards the individual. The quantity of Sattva and Raja particles in pranamay and Manomay-kosh of the individual increases because of Sri Ganesh Principle. This in turn increases the vital energy. With the help of this vital energy, the individual receives the flow of God’s sagun Chaitanya for carrying out every action.

7. Application of Tilak in the form of
shendur, bukka, gandh, bhasma and the soil

Applying of bukka attracts the frequencies of Shiv Principle present in the Universe towards the individual. The Shiv Principle increases the proportion of Sattva and Raja particles in the pranamay and Manomay-kosh. Applying of bukka activates the unmanifest Dnyanshakti (Energy of Knowledge) present in the individual. With the help of Dnyan frequencies, the latent energy of pure intellect gets activated and this intellect teaches the individual to maintain a good balance between Maya and Brahman.

Applying of gandh (Sandalwood paste) attracts Srivishnu Principle frequencies present in the Universe towards the individual, which in turn increases the Sattva particles in its pranamay-kosh. This increases the efficiency of the individual and it performs every action on the strength of sattvikta.

Bhasma (Sacred ash) has a high capacity to retain the Tej-tattva. When it acts, it first purifies the void related to the Adnya-chakra with the help of Dnyan frequencies. This action occurs at the nirgun level. Secondly, it clears the waste gases hidden in the throat with the help of kriya frequencies. It then activates the Pancha-pran (Five vital energies) present in the navel area. The retained Tej-tattva attains attributed grossness at the level of the Pancha-pran.

With the help of the soil from a Holy place, due to the presence of Srivishnu, the soil from the banks of Holy rivers like Ganga, Sindhu etc. or Gopichandan, one or more vertical lines are drawn on the forehead. This is called as ‘Urdhvapundra’. The application of ‘Urdhvapundra’ awakens the Yogic ability of the body; that is, the ability of the Adnya-chakra to work with the support of Kriyashakti (Energy of action) is awakened.